The number of victims of the civil confrontation in Ukraine is multiplying every day. On July 31, a cleric of the Church of St. George in the Lugansk diocese, Archpriest Vladimir Kresliansky, died of wounds received during the shelling of residential areas of Lugansk. His five children have been left orphans. New reports are coming in about acts of violence against churches of the Ukrainian Orthodox Church and her clergy who have found themselves in a battle zone. As a result of the internecine strife, many civilians have been killed, churches and civic building have been destroyed, and hundreds of thousands of people have had to flee the area.

In this tragic situation, the Synodal Information Department has made the following authorized statement.

The death of many innocent people who are becoming hostages of fratricidal hatred lies heavily on the conscience of those rejecting dialogue and reconciliation. However, the path of peace, the path of life remains open, and the Church again calls upon all those who are able to hear the Lord’s words, I have set before you life and death, blessing and cursing: therefore choose life, that both thou and thy seed may live (Dt 30:19), to choose this path so that there would be no more victims. 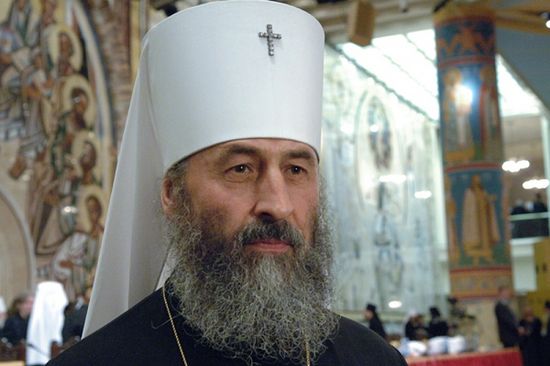 The Ukrainian Orthodox Church tirelessly repeats this call of God to people of good will in the Ukrainian land enveloped in the flames of an internecine feud. She does not discriminate among her faithful according to their political convictions or as those of another sort; she heralds the Word of God, shows her love and care for all her children no matter which side of the conflict they have found themselves on, and seeks the reconciliation of these divided people. The Orthodox clergymen continue to selflessly perform their pastoral ministry and the service of peacemaking in the regions of Ukraine stricken by the confrontation, under constant danger to their own lives and the lives and wellbeing of their families. However, they do not leave their flock, choosing rather to suffer affliction with the people of God (Heb 11:25).

At the same time, the Ukrainian Orthodox churches and clergy have not only been suffering more frequently from the aftermaths of the hostilities, but they are also being subjected to purposeful attacks from the Greek Catholics and schismatics who are maliciously taking advantage of the civil commotion. Priests are subjected to humiliation, tortures and intimidation, as well as to forcible detention and interrogations. During such interrogations, armed men, belonging to the Ukrainian Greek Catholic Church or some uncanonical groups and claiming that they are authorized by the Ukrainian authorities, bring absurd accusations against the Ukrainian Orthodox priests and give them ultimatums, such as commands to leave the Ukrainian Orthodox Church and re-register the church property accordingly.

In his letter to Ukrainian President Petr Poroshenko, Metropolitan Onufry of Chernovtsy and Bukovina, Locum Tenens of the Metropolitanate of Kiev, described cases of attacks committed by armed men against clergymen in the territory of the Donetsk diocese, including beatings and threats to inflict bodily harm. For example: in the Amvrosiivka district, a group of armed men bound archpriest Yevgeny Podgorny with ropes, beat him severely with a rifle butt, tore his priestly cross from his neck, fired their guns above his head, threw him into a pit, and threatened to kill his son. Many such reports are coming in from other dioceses of eastern Ukraine. For example, near Slaviansk some people with submachine guns made Archpriest Vadim Yablonovsky dig a grave for himself, and that same day handcuffed Archpriest Viktor Stratovich, put a bag on his head and brought him to a forest where they made him stand on his knees while they interrogated him.

We call upon the authority structures of Ukraine and competent international human rights watchdogs to immediately initiate an investigation into these incidents.

We are especially alarmed by the attempts of some Greek Catholic clergymen and representatives of schismatic communities to support certain radical forces in exchange for the right to dictate ultimatums and perform acts of violence against parishes of the Ukrainian Orthodox Church, which has been steadfast in its peacemaking stance. Some Greek Catholic and schismatic figures have been openly inciting fratricidal hatred, approving violence against the civilian population, and seeking to initiate persecution against all those who are committed to peace and dialogue, including priests of the canonical Church.

We call upon the state authorities of Ukraine to impede those who would like to turn the current civil conflict into an inter-confessional confrontation, as such a confrontation would considerably delay the restoration of the long-awaited peace in the Ukrainian land.

The fratricidal strife in the Ukrainian land can only be stopped by relying on the values common to both parties of the conflict, which have been preserved in the Orthodox spiritual heritage of the God-loving Ukrainian people. We call upon all those responsible for decision-making in Ukraine to support the Ukrainian Orthodox Church in her uniting and peacemaking endeavours, for the benefit of all people. Center of Horlivka Shelled, People Killed and a Church Damaged
On July 27 at 12:35 the Ukrainian Army shelled the Horlivka city center with heavy artillery. Without warning residential districts along Lenin Avenue near the central market, Pobedy (“Victory”) Avenue and Gagarin Street as well as Maysky Village and the modern house district were shelled with Grad missile launchers. Horlivka Diocesan Administration Shelled on the Day of the Baptism of Russia
None of the administration staff members were injured — the shelling took place during a service when everybody was at the cathedral. The watchman, who was in a utility room nearby, survived by a miracle. Ukrainian Hierarchs on the Tragedy in Odessa
Metropolitan Onuphry (Berezovsky), Metropolitan Agathangel (Savvin)
The beautiful Black Sea port city of Odessa, home to several Orthodox monasteries and splendid churches, is still reeling from the utterly horrifying incidents of May2, 2014. A population famous for its diversity and upbeat love of life turned against itself and committed fratricide.

His Holiness Patriarch Kirill: “One of the most important concerns of our Church today is prayer and work for a resolution to what is currently happening in the Ukraine”
His Holiness Patriarch Kirill
The Church must conduct pastoral work for the care of souls, pray, and make peace between people; but under no circumstances must it serve one or another political view, position, or concept.” This allows the Church to remain outside of a conflict, and carry on its work of bringing peace between the conflicting sides.
Comments
×