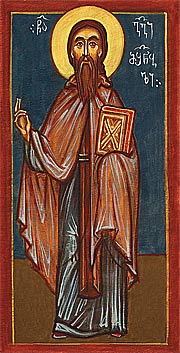 Giorgi was elevated to the rank of abbot after St. Ekvtime left the monastery to travel to Jerusalem. Under his leadership, the main church of the Dormition of the Most Holy Theotokos was constructed. An inscription on the wall of the church reads: “I established these columns and they will not be shaken unto the ages. Monk Giorgi the Georgian, Builder.”

For most of his life Abbot Giorgi was highly respected and even revered in the imperial court of Byzantium, but he was eventually slandered, accused of treason, and exiled to the island ofMonovatia, where he reposed in the year 1029. 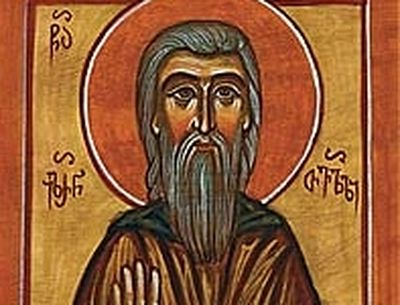 Saint Ilarion of Tvali (†1041)
Archpriest Zakaria Machitadze
Saint Ilarion of Tvali (Tulashvili) served as abbot of Khakhuli Monastery in southwestern Georgia at the beginning of the 11th century. In his work The Life of Giorgi of the Holy Mountain, Giorgi the Lesser writes that Venerable Ilarion was outstanding in virtue and celebrated for his sermons and ascetic labors. 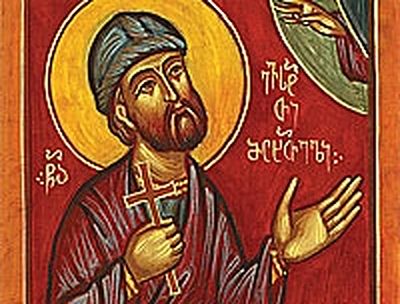 Holy Martyr Evstati of Mtskheta (†589)
Archpriest Zakaria Machitadze
Saint Evstati, a Persian by descent, was a fire-worshipper named Gvirobandak prior to his baptism into the Christian Faith. When he arrived in Georgia and settled in Mtskheta, he was deeply drawn to the morals and traditions of the Georgian people, and he resolved to convert to Christianity.
See also Holy Hieromartyr Kozman (†1630)
Archpriest Zakaria Machitadze
Over the centuries the monastic complex founded by St. Davit of Gareji became a spiritual and cultural center for all of Georgia.Many of the faithful flocked there with a desire to serve Christ. Among them was the hieromonk Kozman, who would end his earthly life as a martyr. Holy Hieromartyr Tevdore (†1609)
Archpriest Zakaria Machitadze
Saint Tevdore was a simple priest who labored in the 16th century in the village of Kvelta. At that time the Ottoman Empire and Persia were locked in a bitter feud over control of the Near East. At the beginning of 1609 the Ottomans conquered first the city of Baghdadi, then part of Samtskhe in southern Georgia. In June of that year they launched an attack on eastern Georgia.