an-Nahar on the Defense of Mhardeh 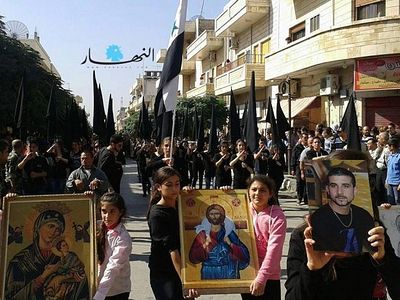 Mhardeh, the city of the sun along the Orontes, refuses for its fate to be like the fate of Mosul. Its people firmly state that they are prepared to die rather than leave their city. The city is of outstanding archeological importance, with Roman and Byzantine ruins and five churches. It is the home town of the late Patriarch of Antioch and All the East Ignatius IV Hazim. It has now become a scene for the rockets of Jabhat al-Nusrah, whose repeated attempts to enter and sieze the city have not yet succeeded. One week ago they made an attempt, which will not be their last, to enter through the Syrian Army's checkpoint at Tell Dahra to the south of Mhardeh. The checkpoint fell and the National Defense was able to regain it, though it cost them the death of one of the sons of the city, Chahoud Najeh Di'an, whose majestic funeral was just held.

The leader of national defense in Mhardeh, Simone who is called "Abu Fahd" has not been exhausted by al-Nusrah's repeated attempts to topple the city where some 17 thousand Christians live. He tells an-Nahar that the city "will not fall, with God's permission." He believes that the defensive war that the people of the city are conducting side-by-side with the Syrian Army is a battle for existence in the fullest sense. He does not hesitate to say that "we will not be a second Maaloula and we will certainly not permit our fate to be like that of the people of Mosul. Martyrdom on this land is one hundred times better than whetting the sympathy of the international community in order to fight ISIS or to stay alive." Perhaps this is because the Islamist fighters insist that toppling this region is no less important than toppling Maaloula in order to score points against the Syrian regime by showing that it is incapable of protecting the Christians who stand with it and regard it as their protector.

We Are a Second Line of Defense 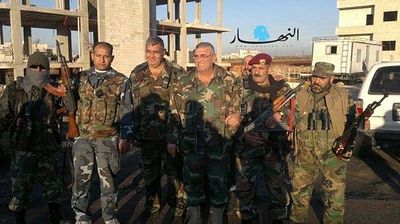 However Abu Fahd states that the fighters' will not easily succeed, through he does not deny their control over the eastern and northern edges of the city, and specifically the hill overlooking it. He says that "the fighters dominate the area to the east and north of Mhardeh and are attempting to continue their advance toward the west and south. However, they are failing at this, especially since the Syrian Army is guarding the highway between the city and Hama."

Abu Fahd, as the people of the city call him, explains that "they are all fighting with the National Defense, but those who are actually trained and are able to bring an element of surprise number no more than two hundred. They are well-trained and constitute the fundamental support for the Syrian Army in the event of any assault by Jabhat al-Nusra on the entrances to the city. We have logistical teams and an emergency team to assist victims."

Our Martyr is a Bridegroom 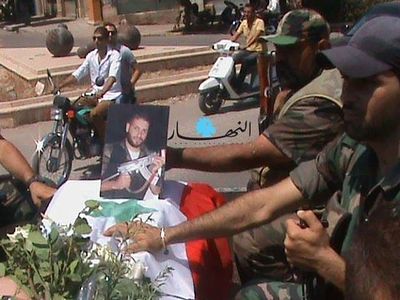 He adds that "National Defense is the second line of defense after the Syrian Army, which constitutes the first line of defense. If any of the army's positions falls, we go directly to support it and regain control."

Regarding the provision of arms and food, he says that "the city has not lacked anything since the start of the crisis. The fact that the western side has remained free has meant that there is an outlet toward Hama for securing the city's daily needs. Were it not for the treacherous shelling everything would be normal and everyone goes about their normal daily activities. Weddings have not ceased in Mhardeh and even at funerals we process our martyr like a bridegroom." He adds, "As for the provision of arms, the Syrian Army arms us. Financial aid comes to us from the city's diaspora, who have not fallen short for a single day with their moral and material support."

The Church is With Us

Abu Fahd affirms that bearing arms is not part of their Christian belief, which calls for mutual forgiveness and peace, however he states that "we were compelled to bear arms in order to defend our history, our civilization and our dignity. We did not choose this of our own free will, but we will not permit our land and our families to be violated." As regards the Church's approval of their bearing arms he says, "even if the Church does not openly support bearing arms, she is with us implicitly because our existence is part of her existence."

Despite the high morale enjoyed by the people of Mhardeh in the face of what the coming days may bring, they are living day by day in anticipation of a breakthrough in their country's situation and the return of stability.

Beleaguered Syrian Christians fear future, increasingly targeted by jihadis
Christians believe they are being targeted — in part because of the anti-Christian sentiment among extremists and in part as punishment for what is seen as their support for Assad.
Comments

Isaac Crabtree8/25/2014 9:48 pm
Unfortunately this is imbalanced teaching that has attempted to tell Christians that, no matter what, they should always forsake the sword. However, this is not what the Fathers say-- even the earliest pre-Nicene Christians like St. Athanasios the Great said that killing in war for defense of the true faith and piety was not murder.

Certainly we also find that teaching again and again amongst the saints-- St. Sergius of Radonezh blessing the war against the Tatar horde, and so many others.

We in the West are the victims of the Tolstoyites that fled amongst the diaspora of the Russian intelligentsia. They are now in charge of things like the Orthodox Peace Fellowship that does a terrible job in equivocation of just causes in war to the unjust murder of innocent people.

How do these people deal with the overwhelming contradiction of their position to those of the warrior saints, or of the holy ascetics who blessed Orthodox sovereigns to take up arms in the defense of the innocent? I simply don't know. Perhaps like Protestants they are willing to disavow the sobriety of the balanced spiritual experience of history with the thrill of their novel theories and their twisting of Divine Scripture.

robert everingham8/23/2014 4:50 am
keep up the the good fight , you have people like my self on the other side the world (aust)thinking and praying for you.

Abouna Timothy Tadros8/23/2014 4:21 am
May our Lord Jesus Christ give them strength and perseverance to endure the enemy of God!
×