Venerable Serapion the Wonderworker of St. John the Baptist Monastery (†1774)

Saint Serapion was abbot of the Monastery of St. John the Baptist in the Davit-Gareji Wilderness. He was endowed by God with the ability to work miracles.

Once St. Serapion set off for the city, following at a short distance behind several of the monastery’s brothers.

While they were traveling, a group of bandits attacked the monks who were walking in front of their abbot and made off with many of the church vessels they were carrying.

Terrified, the monks ran back to Serapion and told him what had happened.

“Great is God!” said Serapion. “I will not permit the unbelievers to steal His sacred things!”

With staff in hand, the elder raced ahead alone in pursuit of the robbers. When the robbers turned back they saw a terrible flame issuing forth from the elder’s staff and became greatly afraid. They abandoned the donkey that had been carrying their spoils and took to their heels.

Another time Serapion suddenly burst out of his cell and cried to the brothers, “Woe is me! Woe is me! Robbers have attacked the servants on their way to the monastery!”

St. Serapion eventually abandoned his leadership of the monastery. He was tonsured into the great schema and withdrew into seclusion. Soon after, God revealed to him that his death was near, and he asked the brothers to bury him under the church gates, in a grave that he had prepared for himself. He intended for all who entered there to walk over his grave.

Thou who wast endowed with divine sanctity and humility, O good preacher of the Christian Faith, Holy Father Serapion, pray to God for us! 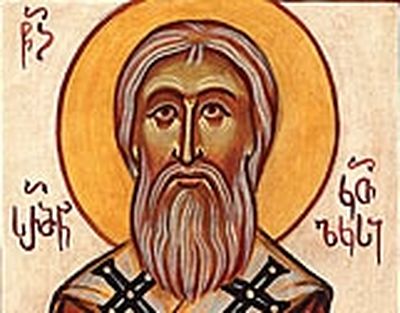 Holy Catholicos Sarmean (†774)
Archpriest Zakaria Machitadze
The chronicles listing the generations of chief shepherds of Georgia reveal that St. Sarmean was leader of the Georgian Apostolic Church from the year 767 (or 760, according to some sources) until the year 774. These were years of Arab-Muslim rule in Georgia. The Arabs persecuted the Christians, oppressed those who served in the Church, and tried in every way to convert the country to Islam. Despite the frightful abuses that the faithful endured and the transformation of the city into a residence for the emir, many Tbilisi churches continued to function. 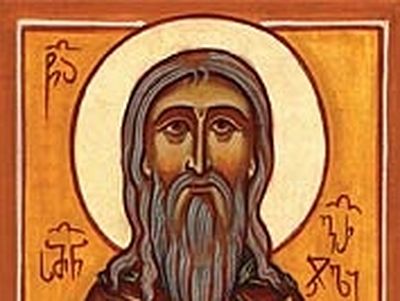 Venerable Svimeon the Wonderworker (†1773)
Archpriest Zakaria Machitadze
Saint Svimeon was raised at Davit-Gareji Monastery. He labored as a simple monk until he reached an advanced age, and was chosen to be abbot. Outstanding in virtue and humility, St. Svimeon was endowed by the Lord with the ability to work miracles.
See also Venerable Serapion of Zarzma (†900)
Archpriest Zakaria Machitadze
Saint Serapion of Zarzma was the son of a Klarjeti aristocratfamed for his wealth and good deeds. Serapion had twobrothers, who were still young when their mother died.Their father also reposed soon after. Holy Catholicos Mamai (†744)
Archpriest Zakaria Machitadze
Saint Mamai served as chief shepherd of the Georgian faithful from 731 to 744.The information we have about his life is scarce, but it is known that St.Mamai was abbot of ZedazeniMonastery and died a martyr for Christ.
×