Former existential atheist and Australian rock star Themi Adams (Adamopoulos) today is a Greek Orthodox priest, spearheading the Orthodox Church’s apostolic mission in Ebola-hit Sierra Leone in Africa. Although Father Themi could flee the country to avoid a possible infection by the virus, like other NGO employees already did, the Greek-Australian decided to stay…

How can any human being, claim lasting happiness when he, or, she remembers the millions of people who are getting beaten to death, beheaded, and torn apart into pieces, at forgotten places where diseases thrive? This might be the reason than Fr. Themi left his rock star lifestyle behind to find pleasure in helping the poorest of the poor. 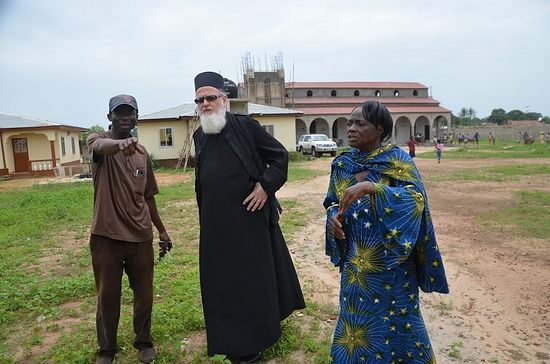 Themistocles Adamopoulos – as is his full name – was born in Alexandria, Egypt, but he was raised in Melbourne, Australia. The priest of Freetown, Sierra Leone, who started the “Paradise 4 Kids” community was sharing the stage with the Rolling Stones in the 1960s. But then as he says below “Jesus” found him.

Arriving into Australia before his teens, Themi went to high school in Melbourne. Gifted in academics he won a scholarship to Melbourne University where he began a Bachelor of Commerce Degree in 1964.

During the 60s, he became a founding member of a Rock n Roll band called ‘The Flies’, gaining intense popularity in Australia.

Two stories from his only and younger sibling Mary, include; teenage fans camping outside their Melbourne home (where his mother felt sorry for the fans and would feed them home cooked Greek food & sweets) and Mary selling his personal belongings such as socks, toothbrushes and clippings of his hair to the adoring fans, thus taking advantage of her brother’s notoriety.

During these Rock n Roll years, father Themi had what he describes as a “mystical” experience, where he believes he saw Jesus. He started searching for God’s path which eventually brought him to the Orthodox Church.

When asked why he chose to start an apostolic mission to Sierra Leone, Rev Themi responded “…I thought we could start at the bottom and work our way up”.

The Ebola Fight in Sierra Leone

Since the first outbreak in December of 2013, the Ebola crisis in West Africa has grown from a local, to a regional and now an international health crisis.

As of August 14th, the U.S. Centers for Disease Control and Prevention report that 1975 cases of Ebola have been reported and 1069 people have died from the disease during the current outbreak. In Sierra Leone, there have been 783 cases of Ebola and 334 fatalities. 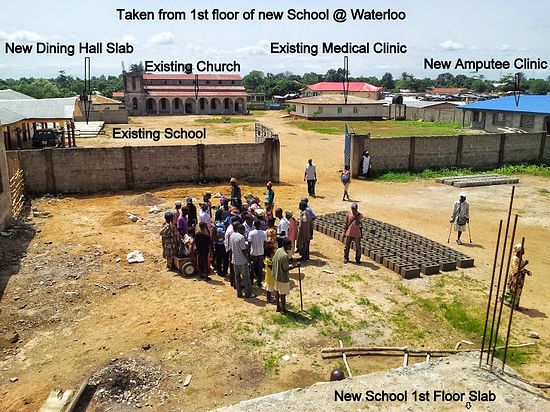 Father Themi, who, runs the Holy Orthodox Mission in Freetown, Sierra Leone which consists of a compound for the disabled, known as Waterloo, a primary school and a teacher’s college. The Waterloo compound was constructed to help care for the children of disabled parents. 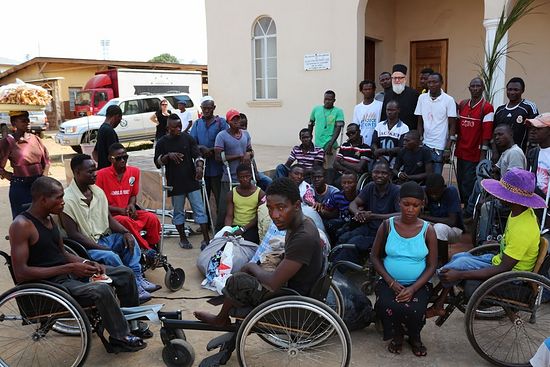 The mission provides housing for the disabled and their families, water wells for drinking, cleaning, and growing of fruits and vegetables. A medical clinic and a small school for the children of the disabled are also located on the Waterloo compound.

From its inception, Father Themi’s missionary work in Sierra Leone has been extremely challenging, but now the systemic problems of recovering from a devastating civil war, poverty, and ignorance have been magnified by a horrific health crisis.

Since March, Father Themi, has been sounding the alarm about the Ebola threat but, unfortunately, his warnings and the alerts of others were not sufficiently heeded. Now, according to multiple international medical authorities, the Ebola outbreak is out of control. Watch Father Themi talk on the subject below:

Interviewed from his residence in Freetown on August 14th, Father Themi said, “This is the worst period of the crisis. I’m hoping that within a few weeks the epidemic will be lessened, but right now we are in the worst part of the storm. Nurses and doctors have run away from the hospitals. There are very few clinics you can go to now and seek any type of medical treatment unless you have a large amount of money.”

“Everyone is scared of everybody else. If anyone complains that they have a headache or a fever… boom, they’re finished. They are completely shunned and isolated. As for the rest of us, we are doing our best to control the situation. The government has quarantined effected areas, movement has been restricted. There is a national curfew – after 7pm no one is allowed on the streets.

“Daily life has become very difficult. Everyone has to wear gloves and wash their hands in chlorine water. You’re never sure if the person you’re talking to has the virus but isn’t showing any symptoms yet. The country has ground to a standstill. Crowds are not allowed to gather. It’s like a war situation.”

Father Themi wants people in the West to know that the Ebola crisis has the potential to reach North America and Europe. “While many of the international air carriers have stopped flying to West Africa, there are still flights from Sierra Leone to other African cities. The potential exists for people who have the disease and may not know it yet to fly to London or New York and then become symptomatic. When the symptoms are present, the disease is spread quite easily through routine human contact.”

Ebola is not transmitted by air, but rather through bodily fluids like blood and saliva. The virus is also not transmitted through water or food, but it can remain on objects, such as needles or even clothing, for an extended period of time after the infected person comes in contact with that object. There is no known cure for Ebola (other than experimental drugs) and no inoculation against the disease. The death rate for those infected with the Ebola virus can be as high as 90%.

“What I am trying to do,” Father Themi says, “is to institute a sound understanding of what we are dealing with without creating too much fear or panic. For example, all of the altar boys have to wear long sleeves, trousers and gloves and wash their hands in chlorine before entering the church. There is a great deal of daily discomfort in addition to the fear of catching the disease.”

Despite the pleas from many of his friends and supporters urging him to leave Sierra Leone and seek safety in Australia, Father Themi stayed on saying, “Our Lord Jesus has taught that the shepherd of the flock does not run away when danger or an enemy approaches but remains to protect the sheep. The hireling runs away. ‘But he that is a hireling and not the shepherd … seeing the wolf coming leaves the sheep and flees….the hireling flees because he cares not for the sheep. (St. John 10. 12-13). I am not a hireling!

“Consequently since the next 30 to 60 days are the most crucial in this current Ebola crisis my natural place for the next few months, or as long as the emergency period remains, is here in Sierra Leone.”

Father Themi is always in need of resources to support his mission, but particularly so now. Additional money is needed to buy food to feed the residents of Waterloo so they will choose to remain in the compound and not go begging in the streets for money.

Begging on the streets of Sierra Leone, once a routine practice, has now become a potentially deadly pursuit.

“We have instituted more stringent security measures on the compound. If residents choose to go into Freetown to beg, they will not be allowed back inside Waterloo. They understand that if they are infected with Ebola they can easily spread the disease to many people in a short period of time. As long as we can feed them, we can keep them here and keep them safe.”

Although the Waterloo compound houses some of the most at risk people in Freetown, to date none of the residents have become infected with Ebola. Father Themi credits this to God’s grace and the efforts of his volunteer staff to take the necessary steps to reduce the chances of infection.

Producer John Tsambazis has announced an upcoming feature film documenting the life of the rock star turned missionary, based on a script by Wid Bastian. Ebola Virus And The Orthodox Mission’s Challenge In Sierra Leone
The present West African epicentre of this non-curable killer infection is in Guinea (Sierra Leone’s northern and eastern border neighbour). Now it has started to spread beyond the Guinean borders.
Comments

Hieromonk Ambrose10/18/2014 12:16 pm
The Sluzhebnik (Priest's Service Book) contains instructions in the back as to how to administer Communion in a time of plague. The Church and its bishops do not adopt a simplistic attitude about this danger.

Beth9/27/2014 7:39 am
Really rings true his comments about our obsession with saving the stranded whale while thousands go hungry and die daily. An inspiring man of God.

Fr. John 9/27/2014 3:29 am
Contaminate the holy Body and Blood of Christ with a virus? Comments of this sort were made frequently during the Influenza Pandemic following World War I; yet study after study showed that those receiving the holy Mysteries (even in the Western Churches) were at virtually no risk, despite the use of the common chalice. Investigators believed then that, between the alcohol content of the wine, together with the use of gold and silver in the chalices and spoons, were effective against the spread of any viruses, as the precious metals served to lyse the cell membranes of the virus, and the alcohol sterilized the vessel. Of course, precautions should be taken; but to worry about "risking" the contamination suggests that those who have this fear have a rather low opinion of the efficacy of the Body and Blood of Christ to overcome any form of earthly contamination that could result in risk for those who partake in faith.

The Body of Christ uplifts all that are called to His supper. Even Satin himself was unable to contaminate the Body or Blood of Christ.

James J Read9/13/2014 12:39 pm
What a wonderful and inspiring story.This priest deserves all the material and spiritual help that folk can offer.

Justina8/26/2014 4:12 am
re JClivas concern, while there is some history of miraculous noncontaminatability, individual throw away plastic spoons could be used.

re Ebola and air transmission, it will transmit through the air in microscopic droplets from sneezing, coughing or talking too close to each other.

J Clivas8/25/2014 2:44 pm
I hope the natives he is giving Holy Communion to are free of the Ebola virus. It would be wrong to contaminate the body and blood of Christ with this deadly agent.
×