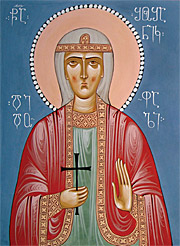 Saint Shushanik was the wife of the Georgian prince Varsken, the ruler[1] of Hereti. Having been raised in a pious Christian family, she was deeply penetrated with love and the fear of God.

At that time Kartli was under heavy political pressure from Persia, and Prince Varsken visited the Persian king Peroz in hopes of encouraging more friendly relations between the two countries. He willingly denied the true Faith, converted to the worship of fire, and promised the king to convert his wife and children upon his return to Hereti.

Having approached the border of Hereti, Varsken sent messengers to Tsurtavi, the city in which he ruled, to ensure that his subjects met him with due respect. The blessed Shushanik, having learned of her husband’s betrayal, fell to the ground and wept over him with bitter tears. Then she took her four children, deserted the palace, and sought refuge in a nearby church.

That evening Shushanik was visited by her spiritual father, the elder Iakob, who predicted, “Varsken’s cruelty and mercilessness are unmistakable. Know that terrible trials await you. Will you be firm and unbending in your position?”

“I would rather die than unite with him and destroy my soul!” she answered.

Three days later the prince arrived in Tsurtavi. As promised, he tried to persuade his wife to convert, but St. Shushanik firmly answered, “As you have renounced your Creator, so I am renouncing you.

I will no longer take part in your affairs, no matter what suffering I must endure!”

The next time, Varsken sent his younger brother Jojik and Bishop Apots to convince Shushanik to return to the palace. Shushanik refused for some time, but in the end she yielded to their persuasion. She set off for the palace with the Holy Gospel and the Lives of the holy martyrs, and when she arrived she locked herself in a squalid cell.

Two days later Varsken returned to the palace and invited Shushanik, his brother Jojik, and his sister-in-law for supper. The queen, however, could not bring herself to share a meal with one who had betrayed Christ: she pushed away the cup that Jojik’s wife had offered her, thus further angering her husband.

The furious Varsken beat his wife mercilessly, fettered her in irons, locked her in prison, and forbade the guards to let anyone in to see her.

St. Shushanik spent six years in captivity. While she was serving her sentence, she helped the poor that came to her. Through her prayers the sick were healed and children were born to the childless.

Before her death, Holy Martyr Shushanik blessed those around her and requested that she be buried at the place from which her unbelieving husband had dragged her out of the palace.

This happened in the year 475. The clergy and people alike wept bitterly over Shushanik’s tragic fate. Her holy relics were buried in accordance with her will.

In 578, with the blessing of Catholicos Kirion I, St. Shushanik’s holy relics were translated to Tbilisi, where they remain today, in the Metekhi Church of the Most Holy Theotokos.

O Holy Shushanik, because of thy husband’s transgression thou wast adorned with a martyr’s crown, and thou didst deny the rank of earthly queen in favor of the Heavenly Kingdom. Now thou dost stand boldly before the Bridegroom, the Immortal Christ. Protect us who praise thy name!

[1] As Hereti (a province of southeastern Georgia) was under Persian control at that time, Varsken was essentially the viceroy for the Persians.

Saint Ekvtime (Kereselidze) the Confessor (†1944)
Archpriest Zakaria Machitadze
Abbot Ekvtime Kereselidze was born in 1865 in the village of Sadmeli (Racha region) to the pious Solomon andMarta Kereselidze. At birth he was given the name Evstate.

Holy Confessors Ioane (Maisuradze) and Giorgi-Ioane (Mkheidze) (†1957 & †1960)
Commemorated September 8/21
Archpriest Zakaria Machitadze
Archimandrite Ioane (Basil Maisuradze in the world) was born in the town of Tskhinvali in Samachablo around 1882. He was raised in a peasant family and taught to perform all kinds of handiwork. Basil was barely in his teens when he helped Fr. Spiridon (Ketiladze), the main priest at Betania Monastery, to restore the monastery between 1894 and 1896.
Comments
×