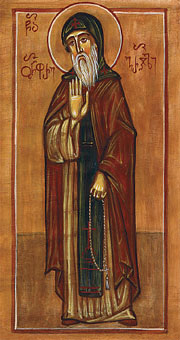 Saint Onopre of Gareji (Otar Machutadze in the world) lived and labored in the 18th century. He was a Kartlian aristocrat famed for his wealth, hospitality, and charity.

Longing for the ascetic life, Otar wore a hair shirt under his distinguished raiment and unceasingly prayed to God for the strength to lead the monastic life.He revealed his will to his wife: “I thirst to turn fromthis world and draw nearer to Christ,” he said.

“Therefore, I beg your forgiveness for all my transgressions, both voluntary and involuntary.”

His faithful wife consented and permitted him to go in peace.

Otar traveled with his two eldest sons to Tbilisi, blessed them, and bade them farewell for the last time. Then he set off for the Davit- Gareji Monastery, which at that time was led by the kindhearted superior Archimandrite German.

Archimandrite German received Otar with great joy, and after a short time he tonsured him a monk with the name Onopre.

Blessed Onopre was a peaceful, humble and obedient man and a tireless ascetic. He would keep vigil through the night, and after the morning prayers he would go down to the ravine and continue to chant psalms, shedding tears over his past transgressions. He ate just one meal a day of bread and water, after the hour of Vespers.

Once the Dagestanis attacked the Davit-Gareji Monastery, plundered the church, and took captive several monks including Onopre, the priests Maxime and Ioakime, and four deacons. Onopre was the oldest among them. The unbelievers planned to stab him to death, but the Lord protected him from their evil scheme. According to the will of the All-mercifulGod, Onopre was freed and returned to the monastery. The brotherhood was impoverished after the invasion, so Archimandrite German sent St. Onopre on a mission to solicit alms.

It was difficult for St. Onopre to depart from the monastery, but he unquestioningly obeyed the will of his superior: the former aristocrat began to walk from door to door, begging for charity. At Tskhinvali in Samachablo St. Onopre attracted the attention of a crowd of people leading a young, demon-possessed man. The saint approached them and discovered that they were bringing the young man to a fortuneteller for help.

With love and great boldness St. Onopre addressed the crowd, saying, “My children, such behavior is not fitting for Christian believers. Bring the young man to me!”

The young man’s mother fell on her knees before him, begging for help, but St. Onopre raised her up and proclaimed: “I have come bearing earth from the grave of St. Davit of Gareji. This will help your son!” He dissolved a pinch of the earth in water and gave it to the young man to drink, and he was immediately healed.

St. Onopre took with him his youngest son, Ioane, and returned to the monastery with a great quantity of provisions.

Once a certain Arab with a wounded eye came to the monastery seeking help. St. Onopre washed his eye in water from the holy spring of Davit-Gareji, and he was immediately healed.

Later St.Onopre desired to be tonsured into the great schema. The superior was hesitant, and told Onopre to remain for twenty or thirty days at the grave of St. Davit praying and supplicatingGod to revealHis will. The saint remained there in prayer, and after thirty days God revealed to the abbot that Fr. Onopre was truly worthy of this honor.

Then Schemamonk Onopre gave a vow of silence and began to sleep on a tattered mat. Under his clothing he wore a heavy chain, and he left his cell only to attend the divine services.

Soon Blessed Onopre became so exhausted that he was no longer able to stand. The brothers begged him to lie on a bed and rest his head on a pillow, but the blessed Onopre opened his mouth for the first time since taking the vow of silence and said, “I vow to end my days on this mat.”

St. Onopre endured his infirmities with thanksgiving and repeated the Jesus Prayer incessantly. When people came to receive his blessing, he would welcome them, saying, “Let me kiss the edge of your garments and wash your feet with my tears!”

Sensing that the end of his days was approaching, St. Onopre partook of the Holy Gifts and, eighteen days later, on the Feast of Theophany, fell asleep in the Lord.

St. Onopre was buried on the south side of the grave of St. Davit of Gareji, near the altar window.

The image of God was preserved in thee, O Holy Father Onopre, for thou didst take up thy cross and follow Christ. Thou didst teach by thine own example that the flesh is to be spurned as transient, while the soul needs great care as immortal. For this thy soul rejoices with the angels! 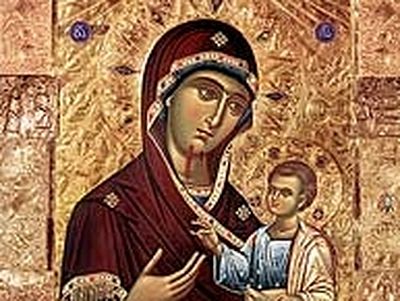 Arrival of the Iveron Icon of the Most Holy Theotokos in Georgia (1989)
Archpriest Zakaria Machitadze
In September 26, 1989, a copy of the famous Iveron Icon of the Mother of God, the “Portaitissa,” arrived in Tbilisi from the Iveron Monastery on Mt. Athos. With the blessing of Catholicos-Patriarch Ilia II, the monks of the Holy Mountain had painted this exact copy as a symbol of love and gratitude to the Georgian people. 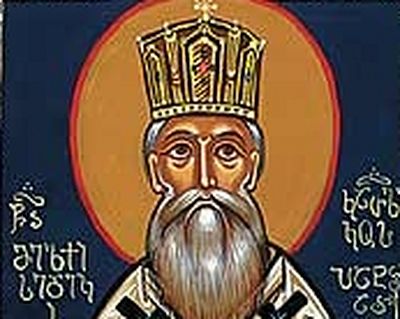 Saint Melchizedek, Catholicos-Patriarch of All Georgia (11th century)
Archpriest Zakaria Machitadze
After the repose of Catholicos Svimeon, leadership of the Georgian Church passed to Catholicos Melchizedek I. St. Melchizedek led the Church from approximately 1010 to 1030, during the reigns of Kings Bagrat III, Giorgi I, and Bagrat IV.
See also New Martyr George of Iberia
Commemorated on January 2
St George (Zorzes) was from Georgia, and was sold into slavery when he was young. His master, a Muslim from the Greek island of Mytilene, forced him to embrace Islam and renamed him Sali.
×