The Hundred Thousand Martyrs of Tbilisi (†1227) 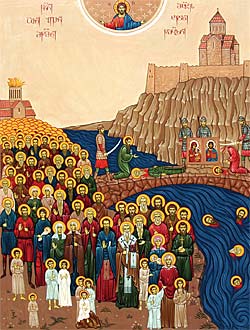 In 1227 Sultan Jalal al-Din of Khwarazm and his army of Turkmen attacked Georgia. On the first day of the battle the Georgian army valorously warded off the invaders as they were approaching Tbilisi. That night, however, a group of Persians who were living in Tbilisi secretly opened the gates and summoned the enemy army into the city.

According to one manuscript in which this most terrible day in Georgian history was described: “Words are powerless to convey the destruction that the enemy wrought: tearing infants from their mothers’ breasts, they beat their heads against the bridge, watching as their eyes dropped from their skulls.…”

A river of blood flowed through the city. The Turkmen castrated young children, raped women, and stabbed mothers to death over their children’s lifeless bodies. The whole city shuddered at the sound of wailing and lamentation. The river and streets of the city were filled with death.

The sultan ordered that the cupola of Sioni Cathedral be taken down and replaced by his vile throne. And at his command the icons of the Theotokos and our Savior were carried out of Sioni Cathedral and placed at the center of the bridge across the Mtkvari River. The invaders goaded the people to the bridge, ordering them to cross it and spit on the holy icons. Those who betrayed the Christian Faith and mocked the icons were spared their lives, while the Orthodox confessors were beheaded.

O ye thousands of stars, the chosen people guarding the Georgian Church with your golden wings, intercede for us always before the face of God! 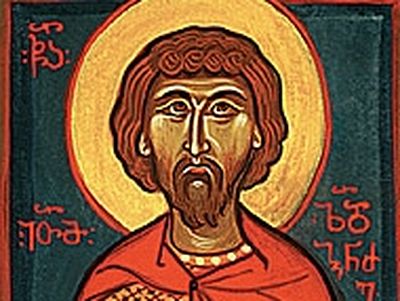 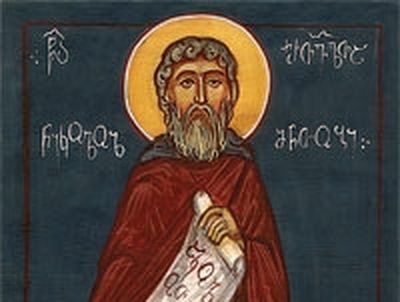 Venerable Nikoloz, Radiant Star of the Georgians (†1308)
Archpriest Zakaria Machitadze
Saint Nikoloz was the author of many church services, but little else about his life is known.He lived in the second half of the 13th century, and the last years of his life coincided with the reign of King Vakhtang III (1298, 1302–1308), the son of the holy king Demetre the Devoted.
See also The Holy Royal Martyrs in the Light of History and God’s Providence
His knowledge of his fate was truly prophetic. “I have more than a presentiment, – he used to say, – that I am doomed to terrible trials, and that I will not be rewarded for them in this world.” Beginning with Russia’s defeat in the Russo-Japanese war, which was followed by the revolution of 1905-1907, which diminished the Tsar's power and freed the forces of anarchy and outright evil, the foundations of Russian sovereignty tottered more and more. Holy Hieromartyr Dositeos of Tbilisi (†1795)
Archpriest Zakaria Machitadze
Thirty-five thousand Persian soldiers marched toward Georgia in the year 1795. The Georgian king Erekle II (1762–1798) and his two thousand soldiers declared war on the invaders as they were approaching Tbilisi. The Georgians won the first skirmish, but many perished in the fighting. The enemy was shaken and was preparing to flee the battleground, when several traitors reported to Aqa Muhammed Khan that King Erekle had lost nearly his entire army.
×