The Beheading of the Holy Prophet and Forerunner John the Baptist 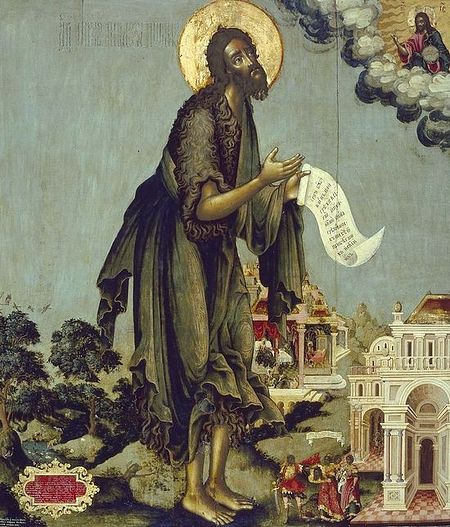 Why does the Church give such veneration to St. John the Baptist, even fixing a strict fast day in his honour? Here are ten reasons:

1. Our Lord Himself said that St. John was the greatest prophet “among those born of women” (Luke 7, 28). Some hearing these words are surprised. They ask: Surely, Christ Himself is the greatest man born of women? However, Christ was not born of a woman (i.e. a married female), he was born of a Virgin. Therefore, in obedience to our Lords words, that St. John is the greatest born of women, the Church duly honors him. In fact, there are no fewer than six feasts of St. John in the Church Year. The first is his Conception on September 23/October 6. Then comes his commemoration on January 7/20, the day after the Feast of the Baptism of Christ. The third is the Second Finding of his head on February 24/March 9. His next feast is the Third Finding of his head on May 25/June 7. The fifth is his Birth, or Nativity, on June 24/July 7, and finally today’s feast, the last in the Church Year, his Beheading on August 29/September 11.

2. The parents of St. John were great and holy people in their own right and their child was a gift in answer to prayer made to them in their pious old age. His father was St. Zachariah, Prophet, Priest and Martyr. His mother, St. Elizabeth, was the sister of St. Anna, that is the sister of the mother of the Mother of God. This relationship between the Mother of God and her kinsman, St. John, is expressed in the icon which hangs over the holy doors in every Orthodox church. This shows Christ in the center, the Mother of God on His right and St. John the Baptist on His left. This icon is called the Deisis, and signifies how our salvation is related not only to Our Savior, but also to His Holy Mother and St. John.

3. For this reason St. John has the special title of the “Forerunner”, in Greek “Prodromos”, which in is a common Greek Christian name. St. John alone can claim to be the Forerunner of Christ, therefore the pioneer of our Faith. How can we fail therefore to give him special honor?

5. St. John the Baptist, the first Prophet of the New Testament, was also the first Martyr during Christ’s public preaching, some three years before the holy Archdeacon Stephen, who was the First Martyr after Christ’s Ascension.

6. It can also be said that St. John the Baptist was the first Monk, indeed this is why he is the patron-saint of monks and the monastic life. This is the meaning of the first Gospel today, in which our Lord tells the young man who wishes to follow him, first of all to obey the commandments and then to give up all his riches. That is how St. Antony the Great decided to go into the desert, on hearing this very Gospel, so imitating St. John the Baptist.

7. The first step towards monastic life, and indeed towards Christian life in general, is repentance. And this is the first word of St. John. Therefore he is great, because he preaches repentance. Repentance is the letter A of the Orthodox Christian alphabet, it is the mark of truth, the mark of sobriety, the absence of exaltation, the sense of reality. Thus, St. John’s first disciples, Andrew and Peter, were also the first disciples of Christ. And we should not forget that St. John preached repentance not only on earth, but also in hades. After his beheading, St. John went down to hades, where all departed mankind was held captive, and there preached to all generations, from Adam and Eve on, of Christ’s imminent coming, in less than three years from then.

8. The first step in monastic life is obedience. This obedience can be seen in St. John’s prayer and fasting. He prayed in the desert and ate honey and locusts, dressed in camel-hair. He was ministered to by angels. Thus, in the Church he is called “a heavenly man and an earthly angel”. His obedience can be seen in his accepting to baptize the Son of God, Whose shoelaces he, in his own words, was unworthy even to undo.

9. The second step in monastic life is poverty, not only in terms of having no money, but also in having no power. St. John fearlessly denounced power that was abused, that was used to do evil. This is the meaning of today’s second Gospel, the Gospel for St. John. This Gospel tells us how St. John had denounced Herod Antipas, the son of the Herod who had slaughtered the Holy Innocents nearly thirty years before in Bethlehem, who at the time of St. John’s preaching was the ruler in Galilee.

10. Finally, St. John was great, because he heralded the third step in monastic life, that of chastity. St. John denounced the sins of sensuality of Herod Antipas, he denounced the primacy of the body over the spirit. The latter had first married the daughter of an Arab prince, called Aretas, then he had taken for his mistress his own sister-in-law, Herodias. By her he had had a daughter, Salome. And then Herod had an incestuous relationship with this daughter, whom he had had by his mistress. As a result of St. John’s denunciation of Herod’s iniquity and that of Herodias, he was beheaded, his head brought before Herodias on a platter. That is why Orthodox always ask for the prayers of the Baptist John in cases of brain-tumors, migraines and headaches.

As we have heard, it was at Herod’s birthday-party, that Herod, excited by his daughter’s dancing, gave way to his wife’s demand to behead St. John. This is a reason why we Orthodox do not make a great fuss of our birthdays, but rather of our saints’ days. For this episode with Herod is the only time in the New Testament that we hear of a birthday, and it caused a great crime to be committed.

The punishment of Herod was terrible. Firstly, his kingdom was invaded by the Arab Prince Aretas, who was all too keen to avenge his daughter’s honor. Then Herod was exiled with all his family by the angry Romans. Exiled by them to Lerida in Spain, it was here one terrible winter that his daughter Salome fell through a hole in the ice while crossing a frozen river. As she sank into the river, the ice froze around her neck. Struggling to free herself, she moved her legs, as though dancing. At that moment, however, jagged edges of ice cut through her neck and she was beheaded. Her sinful and unrepentant body disappeared forever beneath the ice. Eyewitnesses saw her decapitated head on the ice, picked it up and took it to Herod—on a platter. As regards Herod and Herodias, they too disappeared, for they fell into a crevasse which opened up during an earthquake in Lerida. Thus, they disappeared from history, without obeying St. John’s call to repentance, swallowed by the fires beneath the earth. But as regards St. John who called and still calls to repentance—his name lives on forever.

Holy Forerunner, Prophet and Baptist John, pray to God for us!

Homily on the Feast of the Beheading of St John, the Glorious Prophet, Forerunner and Baptist of the Lord
St. Justin Popovic
What is this? Could it be that this world has become a madhouse? People do not want God, they do not want the greatest Righteous One in the whole world. Whom do you want? Whom would you prefer? Whom would you set in Christ’s stead? With whom would you replace St. John the Baptist? With yourselves?! О moth! О, tiny mortal insects! Yes, when people become maddened by pride, when out of egotistical pride they lose their reason, they have no need of God, they have no need of God’s Truth. They declare themselves to be gods. They present their petty, shallow, false likeness of truth as the great and salvific Truth. Bulgaria's Discoverer of St. John the Baptist's Relics, Kazimir Popkonstantinov: This is the Archaeology Find of an Epoch
We knew that because in this early stage of Christianity, after it was declared an official religion by the Byzantine Emperor Constantine, it was very likely to find one. People at that time used to put a reliquary with the relics of the patron, to whom a temple is dedicated, under the pillar of the alter table, when the temple is sanctified.
Comments
×