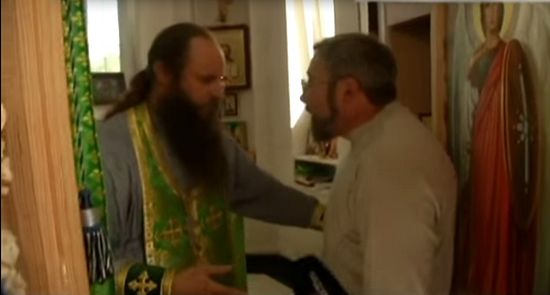 The day before. A "priest" from the "Kiev Patriarchate" tries to get into the altar. Capture from a video by "Надзвичайні новини. ICTV".

This was reported at 21.30 by the journalist and staff member of the Publishing Department of the Ukrainian Orthodox Church (the Moscow Patriarchate) Dmitry Marchenko on his “Facebook” page. 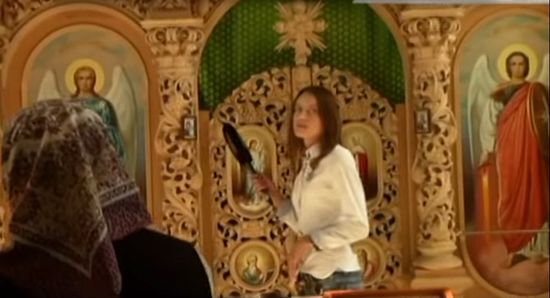 A Ukrainian journalist trying to "interview" the priest, who is in the altar. Capture from a video by "Надзвичайні новини. ICTV".

"Pasechnaya village, the Baryshivka district of the Kiev region. Today there was an attempt to seize the local Orthodox Church of the Holy Spirit. The invaders are tough guys from among newcomers and several local villagers under the leadership of “priests” of the so-called “Kiev Patriarchate”,” the message reads.

“Priests and parishioners have locked themselves up inside the church. The information is reliable—it has been confirmed by the rural dean. We are asking for prayers”.

“At the moment the church is sealed till Monday. Prayers are needed. They can take it (the church) away, but this time “in a more civilized way”. Schismatics seize three more churches in the Ukraine
According to Metropolitan Bartholomew of Rovno and Ostrog, followers of the so-called “Kiev Patriarchate”, unrecognized throughout the Orthodox world, are seizing churches of the Ukrainian Orthodox Church of the Moscow Patriarchate. Is There a Place for The Russian Orthodox Church in Post-Maidan Ukraine?

Is There a Place for The Russian Orthodox Church in Post-Maidan Ukraine?
The civil war in Ukraine divides not only churches and confessions, but even the priests’ families.
Comments
×