Venerable Giorgi the Scribe and His Brother Saba, of Khakhuli (11th century) 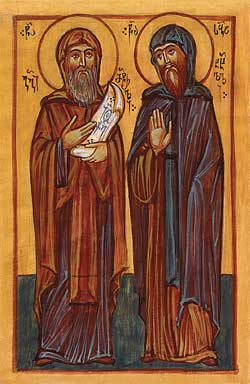 The holy fathers were filled with divine grace. The elder brother, Giorgi, was a spiritual adviser in the court of King Bagrat III Kuropalates and, along with the king, he became an active participant in the production of ecclesiastical literature.[1] The younger brother, Saba, is remembered as a righteous and blameless man by the renowned Church figure Giorgi the Lesser. According to Giorgi the Lesser, the brothers were generously endowed with both spiritual blessings and material wealth.

When the holy fathers heard about the piety of their nephew, the young Giorgi (later of the Holy Mountain), they suggested that Iakob bring him to them in Khakhuli in Klarjeti. With exceeding gladness Iakob brought his son to the God-fearing brothers.

At that time a certain Peris Jojikisdze, a nobleman married to the daughter of King Bagrat III, governed the village of Tvartsatapi. Peris thought it wise to invite an intelligent and experienced monk to his palace to serve as an instructor and spiritual guide, and he selected St. Giorgi to fill this role. With great reluctance the venerable father consented, and he was entrusted with responsibility for all the spiritual and earthly affairs at the palace.

Giorgi of Khakhuli took the young Giorgi with him to the palace of Peris Jojikisdze. A year later, the Byzantine Emperor Basil II brought false accusations against Peris and ordered his execution. His wife and those in his court, among whom were St. Giorgi and the young Giorgi of the Holy Mountain, were captured and escorted to Constantinople.

After twelve years in Byzantium, the captives were finally permitted to return home. Upon his return to Georgia, Giorgi of Khakhuli sent his nephew to Khakhuli Monastery, entrusting him to the care of his brother Saba.

The holy fathers reposed peacefully in the mid-11th century. Truly you labored as a single soul in flesh and spirit. O Holy Brothers Giorgi and Saba, pray to God for us!

[1] This period is known as the Golden Age of Georgian Letters, when many translations and copies of ecclesiastical writings were made. 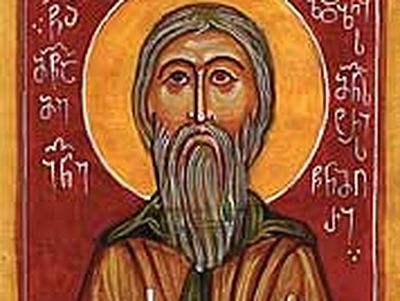 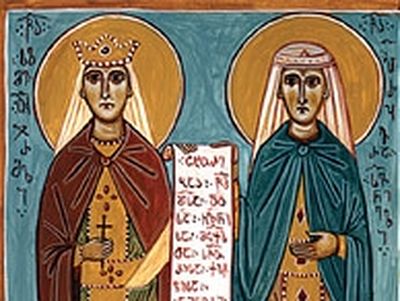 Holy Confessors Ioane (Maisuradze) and Giorgi-Ioane (Mkheidze) (†1957 & †1960)
Commemorated September 8/21
Archpriest Zakaria Machitadze
Archimandrite Ioane (Basil Maisuradze in the world) was born in the town of Tskhinvali in Samachablo around 1882. He was raised in a peasant family and taught to perform all kinds of handiwork. Basil was barely in his teens when he helped Fr. Spiridon (Ketiladze), the main priest at Betania Monastery, to restore the monastery between 1894 and 1896. Venerable Giorgi the God-bearer (†1068)
Archpriest Zakaria Machitadze
Saint Giorgi the God-bearer and Recluse labored in the Black Mountains near Antioch during a time when the churches and monasteries there flourished. Orthodox Christians from many parts of the world came to settle there, and as a result, tensions often arose between monks of different nationalities. Saint Giorgi of Atsquri (9th–10th centuries)
Archpriest Zakaria Machitadze
Few biographical details about St. Giorgi of Atsquri have been preserved in the writings of the famous 10th-century Georgian hagiographers Giorgi Merchule and Basil of Zarzma.
×