Sermon by His Holiness, Patriarch Kirill, on the feast of the Exaltation of the Cross of the Lord in Moscow’s Church of Hieromartyr Clement, Pope of Rome 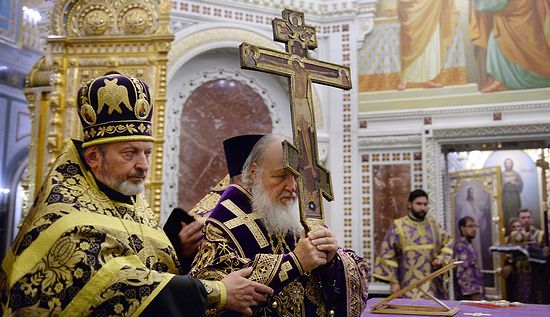 I would like to sincerely congratulate all of you on the great feast of the Exaltation of the Precious, Life-Creating Cross of the Lord, and the consecration of Moscow’s Church of the Holy Hieromartyr Clement, Pope of Rome.

This church is one of the more renowned—and, in every respect, loveliest—churches of the capital. I express my sincere gratitude both to the rector and to everyone who labored in this church’s restoration.

Its consecration coincided with the feast of the Exaltation. As all are aware, this feast was established in connection with the fact that, after the Life-Creating Cross of the Lord was uncovered at Golgotha on the orders of the Empress Helen, mother of Constantine the Great, the Cross was elevated by the Patriarch of Jerusalem, in all likelihood, above a great crowd of people, thus bearing witness that the Cross had been found and returned to the people; however, not as a tool of torture and execution, but as a symbol of their salvation. It is for this reason that the divine services on the feast of the Exaltation are dedicated foremost to the Cross itself, signifying that the Cross exists for the life of the people, for preaching Christ, for the work of salvation.

It is for this reason that a verse from the First Epistle of the Apostle Paul to the Corinthians is read on this day, which contains remarkably wise words about the Cross, words penetrated with Divine truth: Inasmuch as the world by its own wisdom knew not God, it pleased God by the foolishness of preaching to save the world (see І Cor. 1:21).

These are truly stunning words. They encapsulate the entire history of mankind, the history of the agonizing search for God, for Divine truth; a time when the best minds struggled to comprehend what this supernatural power was, whose presence every person senses in one form or another; a time when people attempted to find God, often falling into terrible delusions, assigning Divine power to the forces of nature or even to artificial works of creation.

But also to be found on this path of seeking after God were remarkable feats of mental insight, when pagan philosophers began to grasp with their minds the presence of something that far surpassed their reasoning (and every other human reasoning). Even the Holy Fathers spoke of such men, saying that the seed of the Divine word dwelt within them. The fullness of the Word had not borne fruit in them, but the seeds of Divine truth already abode in their thoughts, in their seeking after the Divine. And nonetheless, neither man’s primitive fear of the surrounding world and the formidable forces of nature; nor the deification of these natural forces; nor the deification of their own selves, as so often took place on the path of seeking after God; nor even these philosophical insights, about which the greatest Christians minds spoke, saying that they contained, like seeds, the Divine word, was enough to bring people to the true God.

The Apostle Paul speaks of this in this one phrase. This phrase by itself covers a millennium of intense and agonizing seeking after God. And when mankind did not find God after putting all of its effort into this path, including even its great minds in the highest sciences of their day, only then did it please God to save the world by the foolishness of preaching.

What is foolishness? It is a form of madness. In the Christian tradition, it is accompanied by certain great and noble characteristics, and we know that there were fools among the saints. But the Apostle Paul speaks of a different foolishness. He speaks of stupidity, of improbable intellectual weakness, of something that for some was a stumbling block, and for others, madness. How could man’s attempts to know God be founded on human weakness, almost on madness? What was this preaching of Christ? The Jews could not understand it; for them, it was truly a kind of stumbling block: how could this be? A man executed as a criminal by the most humiliating means—what good could come from him? What power could come from him? People avoided the sight of crosses at all costs. It was the most terrible form of abasement, weakness, defeat, and punishment.

We can draw certain parallels with today. It would be as though someone began saying that the prison cell of one sentenced to life imprisonment… bore salvation, and not for one man, which is possible, but for the entire world. How would we react to such preaching? A stumbling block for some and madness for others. Such was the preaching of the Cross!

And here arises perhaps the deepest and most fundamental question: Why did the Lord choose humiliation, which for every mentally sound individual appears to be madness? Why did He choose this means of salvation? There can be only one reason – in order to make clear to all that only God can save man; no human wisdom has anything to do with it, nor does any human strength bear it any relation.

A very important conclusion follows from this: one cannot storm the heavens relying on strength. Strength is not the instrument, not the means, by which we can obtain salvation. But many in pagan antiquity thought thus—that only heroes became dwellers in the heavens: one had to be a hero at the outset in order to enter the Olympus of the pagans.

The preaching of the Cross bears witness to God’s complete rejection of any human strength in the matter of human salvation. And the Lord chose the Cross—a symbol of humiliation, a symbol of weakness, a symbol of defeat, a stumbling block for some and madness for others—in order to reveal salvation to the whole world from that Cross.

The Apostle Paul’s words today are perhaps the most powerful strike against the Gospel’s critics, those who search for some cultural, philosophical sources of the Gospel, some adaptations from the ancient cults, and who talk of the supposedly “natural” origins of Christianity. Nothing that contradicts common sense could appear naturally in the world. And salvation through the Cross not only contradicts human reasoning, but challenged the entirety of human thinking.

Who, when dreaming up a religion, would risk putting himself at so great a risk? If it had come from man, then this form of preaching would be smashed to pieces by strikes of logic from the philosophers of the day; more significantly, who would touch this idea after seeing the animosity aimed at it and its universal rejection? But the glad tidings of Christ have survived two thousand years. Namely this preaching transformed the world, because it is not human, but Divine. By it, God Himself, addressing us through the Cross, says: neither through the strength of your reasoning nor the strength of your knowledge, nor through human social status, nor through money, nor through power, nor through any of those things to which men bind their salvation in this life, will you obtain eternal salvation, including both the fullness of life and your own personal happiness; you must believe in Me, I will save you through the Cross, through what many consider madness.

And we know that the Lord saves, that the Cross is "the guardian of the whole world," that the Cross is the triumph of the Church. The Cross of God’s glory is a firm support for nations and governments. And in this tried and true understanding of the power of the Cross is the entirety of our faith in the fullness of Divine Revelation, which declares that it is not by human strength, but by God’s strength that we are saved. And if this is so, if salvation is truly of God, and not of men, then what is the most important thing in life? The most important thing is to serve God, our Savior, the One Who brought this salvation for all peoples, for all ages and all continents, Who opened His embrace to all mankind. And little remains for us to do—we must reply to this Divine action, reply to the action of God’s saving grace with our obedience, with our faith in the Lord’s words, in His Divine commandments. And if we all internalize that great truth that we are not saved by our own strength, but by God, then a great deal will change in our lives. We will be able to properly arrange our life’s priorities, we will be able to walk the path our life peacefully, calmly, and salvifically. And may the Cross of Christ illumine our earthly path. Amen.

Press Service of the Patriarch of Moscow & All Russia The Cross reveals God’s mercy and grace
At the very heart of the Gospel is the Cross of the Lord, and this is what Saint Paul is not ashamed of. Thus, whenever we commemorate the Cross, we are reminded of this and of the profound words we hear at every Liturgy after we commune with the Lord: “...for through the Cross, joy has come into the world.”
Comments
×