LATimes: Generic ancient, liturgical Christians are on the run in Iraq 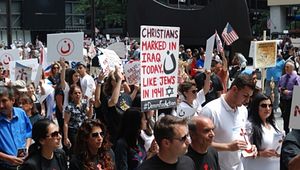 If news consumers in the United States have learned anything in the past decade or two, they should have learned that there is quite a bit of diversity inside Islam in the Middle East and around the world. The doctrinal differences between Shia and Sunni truly matter, for example. And there are crucial divisions among the Sunni that have often caused fierce, hellish conflicts such as the one between Saudi Arabia and the tribes forming the Islamic State.

If anything, the Christian churches in this troubled region are even more complex, with some divisions dating back to the early church fathers and others having roots in the past millennium or thereabouts.

Take Iraq, for example. Even a short list of the Christian flocks in that war-ravaged land would have to include the Chaldean Catholic Church and the Syriac Orthodox Church, the Assyrian Church of the East and the Armenian Catholic Church, the Eastern Orthodox Christians with ties to Antioch and the Byzantine rite Catholic churches with ties to Rome. Yes, there are Latin rite Roman Catholics and various kinds of Protestants in these lands as well, including Anglicans.

At the moment, of course, these churches are united by one hellish condition – persecution. It has taken some time for major media in North American to pick up on this story, even as some of the oldest churches in Christendom are being crushed and driven from their holy sites, sanctuaries and altars.

This terrible unity does not, however, erase the need to be able to tell readers the status of people in these different flocks. The specifics and facts still matter, as details in the larger picture.

So what are we to make of the Los Angeles Times (Tribune Syndicate) piece that ran the other day under the headline, "Iraqi Christians displaced by Sunni militants seek to flee abroad"? What is wrong with the following anecdote that opens the piece?

Word that their hometown may soon be "liberated" has done little to buoy the spirits of the displaced residents of Bartella, a largely Christian town in northern Iraq of 20,000 overrun last month by Islamist militants.

There is no sense of heady anticipation from the exiled townsfolk and tens of thousands of other Christians who have fled the onslaught of Islamic State extremists. Many displaced Christians now see no future in Iraq, home to one of the most ancient Christian communities anywhere.

"Now we know there is no more security in this country," said Father Bahnam Lalo, pastor of Bartella's St. George Church, who, like most of his parishioners, fled to Irbil, capital of the relatively safe semiautonomous Kurdish region. "We love this land, we're rooted to this land, but it's hopeless."

OK, so this minister is called "father." So he is a priest in what church? Readers in the United States would probably assume that he is Catholic. But is that true? What kind of Catholic? Or perhaps he is from one of the Orthodox bodies?

Again, I understand that the collective is crucial, right now.

But as a member of one of these ancient churches (I am part of an Antiochian Orthodox parish, with ties to Damascus), I would really like to know more about the status of some of the individual flocks, their churches and their leaders (two Orthodox bishops have been missing for many months).

This story gets the collective, but that's it.

International attention last month focused on the plight of the Yazidis, another minority group, and their harrowing escape to Mt. Sinjar. But about 100,000 Christians also have fled the Sunni militants since June, church leaders say.

Multitudes of displaced Christians are now hoping to join relatives in Europe, the United States, Australia and elsewhere. Many have had enough after more than a decade of sectarian-fueled conflict that followed the U.S.-led invasion of Iraq, during which Christians have become an ever-more vulnerable minority. They would rather contemplate immigration, despite its many challenges, including the often extreme difficulty of acquiring visas, and the risks of enlisting the services of human smugglers.

Later on, the story mentions a Christian neighborhood – Ainkawa – and another individual parish -- the Church of St. Joseph -- yet, once again, there are no facts to identify who is who. Trust me, folks, when I say that this is not a region that contains many generic Christians. Everything is very specific in these troubled lands.

Why avoid the factual details? Did the reporters, literally, not know the long and detailed histories of any of these groups?