ISIS Is Putin’s Problem, Too, and This Chechen Is One Reason Why

Abu Omar served with the U.S.-trained Georgian army, spent time in jail, and emerged a jihadi. Now at the top of the ISIS leadership, he wants to take the war to Russia. 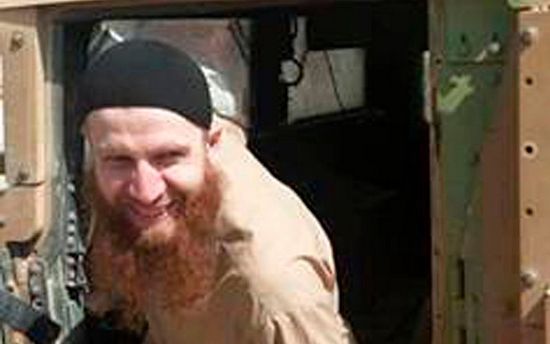 BIRKIANI, Georgia — Time seems to stop in this sleepy Georgian village high in the green mountains of the Pankisi Gorge. Nothing has changed around the little gray house that was the family home of one of the most senior commanders of the so-called Islamic State that is now the target of America’s wrath in Syria and Iraq. This is just a one-story gray dwellng with four windows, behind a farmer’s fence built of massive stones. A small outdoor television satellite dish sticks out of tall grass alongside a few piles of firewood. By any standard the home of Abu Omar al-Shishani (“the Chechen”) looks poor and abandoned.

Rumor has it that these days Abu Omar, whose real name is Tarkhan Batirashvili, lives in a luxurious villa with a swimming pool in Syria. That may or may not be true. And he is said to be luring more young Muslims from his home region in the Pankisi Gorge to join his insurgency forces. Of that there is little doubt.

Red-bearded Abu Omar has become a symbol of much that Washington hates and fears in its war on ISIS or ISIL, as the group is widely known: He is a foreign fighter—a convert to Islam, no less—and a veteran of the U.S.-trained Georgian military. He’s proved able to implement devastating tactics against the Kurdish and Iraqi armies, and wreaked havoc with the moderate Syrian rebel forces the Americans are rushing to train. According to U.S. intelligence, he is a member of the shura council, a group of the top ISIS leaders; he helped organize the seizure of Mosul, Iraq’s second-largest city, and now commands ISIS forces in northern Syria that are the focus of the American-led bombing campaign. His units are believed to have about 1,000 foreign fighters in their ranks, and may have been responsible for holding foreign hostages.

But Abu Omar also is a figure whose history on the battlefield extends into the rebellious Russian province of neighboring Chechnya, where his mother had her roots. And even as he plots defenses against American and allied air raids, he is taunting Vladimir Putin and his allies in Grozny.

The Pankisi Gorge is a beautiful place, but it does not offer big opportunities to the local boys. Two unemployed 17-year-olds, both of them ethnic Chechens, told The Daily Beast they have hardly anything to do besides “sit and stare at each other,” pray at the village mosque or chat with their friends in Syria on WhatsApp forums. One of the friends, a dropout from Georgian Technical University who wore a beard and no mustache, a look typical of many would-be jihadis, said that most of his friends were thinking of hopping on a bus and going first to Turkey and then to join Abu Omar’s troops in northern Syria, “to die for Allah.” The current front line around Kobane, Syria, is only a day’s drive away. To them, anybody supporting Bashar Assad or joining the war against ISIS is taken to be a direct enemy.

Conservative Salafi Islam took the younger generation under its wing, and now “dozens go to fight in Syria, not for money, their families tell us, but for pure belief,” according to the director of a regional development foundation, Iza Bekauri. It is a problem he feels personally and deeply. As we talked, locals came to express condolences for Bekauri’s student, 18-year-old Beso Kushanashvili, who was killed in Syria last week. “Last time we saw him in June, he told us about his plans to travel to Turkey and continue his IT studies,” Bekauri recalled. Traditional Sufi imams might once have dissuaded these young men from seeking out the Syrian battlefield. But the call of this jihad has proved stronger.

Georgian authorities say that the problem of recruits heading for the ranks of ISIS still is not more significant numerically than in Europe or the United States, where other young Muslims have been recruited to the ISIS ranks.

In an exclusive interview on Friday, Georgian President Giorgi Margvelashvili said that finding ways to take control over jihadi-inclined emotions in Pankisi is a sensitive issue in a country still struggling to teach respect for civil liberties.

“By putting more pressure, we would devalue the democratic processes; the openness of our law enforcement agencies and development of civil society,” said Margvelashvili. “By strengthening the law enforcement vector you might see a temporary solution, but eventually it would lead to totalitarian control.”

To some extent, it seems, “the law enforcement vector” contributed to the radicalization of Abu Omar. Just a few years ago, he was going to the Orthodox Church with his Christian father, and working as a shepherd in the mountains.

“During the war in Chechnya he helped Chechen insurgents and refugees to cross back and forth from Chechnya to Georgia,” a former spokesman for the Georgian Interior Ministry, Shota Utiashvili, tells The Daily Beast. Walking on the most remote mountain paths with insurgents, the young shepherd developed his knowledge of maps, terrain and weaponry, a skill he later used and refined while serving with Georgian military intelligence in the 2008 war against Russia.

In 2010, however, a Georgian court sentenced Batirashvili to three years of jail for illegally possessing a weapon. In prison, Batirashvili converted to conservative Islam, grew a beard and swore he would lead a holy war against non-believers when he got out of jail. In 2012, he was diagnosed with tuberculosis. The future ISIS commander was released from prison and moved to Turkey. Nobody in Pankisi has seen him since then.

On September 24, the the U.S. government placed 28-year-old Abu Omar on a “specially designated global terrorists” list. But Abu Omar seemed unperturbed. His sights are still set on Russia. On that same day Abu Omar offered to pay a $5 million reward for the assassination of one of the Kremlin’s most influential figures, Chechen President Ramzan Kadyrov, and lesser rewards for the liquidation of 11 more members of the Chechen leadership ranging from $500,000 to $4 million.

In the Syrian war zone’s crazily complex web of allies, Kadyrov has become a key agent of Putin used to shore up Syrian President Bashar Assad. Indeed, Kadyrov told journalists that most ISIS insurgents were the secret agents of the United States and other secret services. “We killed them during the war in Chechnya and we will kill them there [in Syria],” Kadyrov said in a statement mocking Abu Omar and other ISIS leaders.

Grigory Shvedov, editor of the reliable website Caucasus Knot and a prominent human rights defender, told me that ISIS wants Chechen insurgents to return and fight in the North Caucasus.

“These significant rewards prove that the ISIS leaders are serious about internationalizing their jihad; that’s an order for expanding the war from the Middle East to the North Caucusus, which would be tragic for the Russian state,” Shvedov said. “The rewards are meant to attract those who are thinking today about where to go for their jihad.”

This month ISIS commanders talked explicitly about their plans to fight a war against Putin in a video posted online. They posed on top of Russian fighter jets and other military equipment captured from Assad’s forces.

“This is a message to you, oh Vladimir Putin,” intoned the narrator. “These are the jets that you have sent to Bashar. We will send them to you, God willing. Remember that. And we will liberate Chechnya and the entire Caucasus, God willing. The Islamic State is and will be—and it is expanding, God willing.”

Such ambitions seem very distant from a little house in the Pankisi Gorge, but also right at home there. ISIS has 100,000 fighters, including Western, Russian citizens - expert
ISIS militants control about 40% of Iraq and 30% of Syria and affiliated structures are seizing lands from Somalia and Sudan to Nigeria and inner districts of Sahara, Institute for Middle East Studies President Yevgeny Satanovsky said. Why ISIS Blew Up Jonah’s Tomb, And Why It Might Backfire

Why ISIS Blew Up Jonah’s Tomb, And Why It Might Backfire
But the destruction of Jonah’s shrine is actually a bit more complicated than singling out one religious tradition. For starters, the Jonah story isn’t exclusive to Christianity.