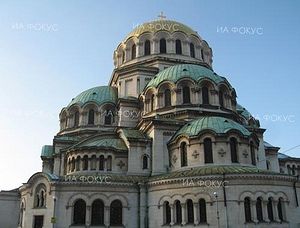 The special ceremony was organised at the Council of Ministers and was also attended by President Rosen Plevneliev, ministers and officials.
“It is a great honour to open this ceremony at which on behalf of the Bulgarian government I will present the title deed of ownership over the Saint Alexander Nevsky Cathedral to the Bulgarian Orthodox Church.

The saga around the ownership of the church has been underway for nearly 100 years,” the Bulgarian Prime Minister remarked.

“Issue over the ownership of the St Alexander Nevsky Cathedral was eventually solved thanks to the consistent efforts of the interim Government and the Bulgarian Church,” Prime Minister Bliznashki said.

“With this act the state and the Church stretched a hand to each other and showed that a well-intended dialogue and joint efforts may find solution to all problems.
We hope that the example we manifested today will be followed by others, too,” the Bulgarian Prime Minister remarked.

“After this memorable day, I believe that with our joint efforts the temple will shine again,” Patriarch Neofit of Bulgaria said speaking at the ceremony.
“We have gone through a long way until we reached this historical moment – the handing of the ownership deed over the cathedral to the Bulgarian Orthodox Church,” the Patriarch said further, adding that the Saint Alexander Nevsky Cathedral was a symbol of the national historical memory and orthodox Christian self-awareness of the Bulgarian nation.

“With the help of the state, the authentic glamour of the St Alexander Nevsky Cathedral will be returned,” Bulgarian President Rosen Plevneliev said on his turn.
The Bulgarian head of state remarked that this had been a long-awaited and historical event.

“We put an end to the uncertainty around the ownership and fate of the St Alexander Nevsky Cathedral, which has been underway for decades.
Unfortunately, all these years left visible negative marks on one of the symbols of our capital and of Bulgaria.

I am happy and proud that this historical and good deed happens during the mandate of the cabinet, which I personally appointed. There is no better moment for such a positive outcome than the year in which the St Alexander Nevsky Cathedral marks the 90th anniversary since its sanctification,” President Plevneliev said. Bulgaria to finance repairs of Athonite Zografou Monastery
The Commission for religions of the National assembly of Bulgaria has unanimously voted for financing of repair in the Bulgarian "Zografou" Monastery on Holy Mount Athos.
Comments
×