Arson of a church in Chernigov region of the Ukraine

Nosovka (Nosivka), the Chernigov (Chernihiv) region of the Ukraine, October 21, 2014 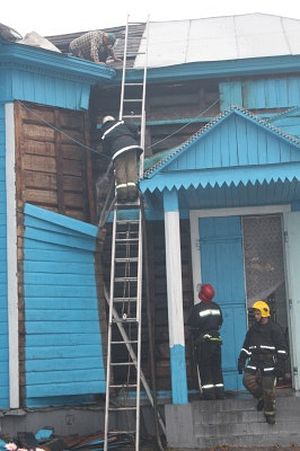 Early in the morning of October 16, 2014, unidentified people set fire to the Church of the Protecting Veil of the Mother of God in Nosovka village of the Shchors Deanery, reports the Chernigov Diocese’s website.

Local residents noticed fire and began to put it out without outside help; then the fire rescue service arrived on call and promptly extinguished the fire.

The fire did not penetrate into the church building: only an outside wall and a part of the roof were damaged.

A piece of a rag and some liquid poured over the ground were found at the scene.

According to the church Rector, Archpriest Bogdan Kibalyuk, there have been no conflict situations with Nosovka residents.

Head of the Shchors Deanery Archpriest Paul Fazan, on arriving at the scene of fire, expressed his sympathy to the church parishioners and the rector.

Despite the attempted arson, services are being celebrated at the church as before.

The police have initiated criminal proceedings about the arson, and investigation is being carried on. Dissenters take over Orthodox church in Rovno Region of Ukraine

Dissenters take over Orthodox church in Rovno Region of Ukraine
"They really started storming the church from the outside. They tried to cut off the lock on the main doors with a grinder, Eventually, they brought a crow bar and just tore the side doors of the right choir place," the report says.
Comments
×