The Icon that Saved a Life 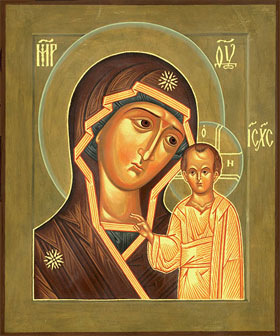 This icon of the “Kazan” Mother of God with the words partially worn away in Latin letters, “Eta ikona budet hranit was wsu schizn,” adorns the Church of the Joy of All Who Sorrow in St. Petersburg. One of the church’s parishioners told its amazing story.

One day, an old woman came into the church and waved her arms when she saw the Kazan icon of the Mother of God.

“Where did that icon come from? I gave it to a German soldier!” She exclaimed in amazement. I recognize it by a characteristic dent in the frame.” I explained that this icon was given to the church by the German Consulate in our city. The woman broke into tears, said that her name was Vera, and told the story of how her Orthodox family icon ended up in Germany.

“I fled my native village, which ended up in the center of the battles. I wanted to leave with my sister and three children earlier, but mama fell seriously ill, and wouldn’t have survived the journey. ‘I will come later,’ I promised my sister, sending her with the children to a place near Ryazan, where our aunt lived in a collective farm village. Mama died a month later, but before her death was able to bless me with the family icon of the “Kazan” Mother of God. My reposed grandfather in his time had blessed my mother before her wedding, and mama blessed Sasha and me with it fifteen years ago, even though my husband was in the Komsomol. Now the icon lay in my threadbare refugee bag. I myself sat down under the awning of one of the station freight houses, watching the crazy dance of whirling snow. I couldn’t think about anything; I only tried to shove my fingers into the narrow sleeves of a light overcoat. Cold and hunger—that was all I could feel. Now a train rumbled up to the station, the doors of the cars opened, and the Fritzes stood in ranks handing long boxes along to each other. ‘They’ve brought weapons,’ the indifferent thought crossed my mind. But then suddenly I felt a painful stab: “It’s going to the front! Where my Sasha is fighting! They will shoot at him with those rifles, and at other Russian soldiers… Oh, the cursed ones!’

“It is strange, but the German patrols paid no attention to me, a lonely woman, emaciated with hunger. I don’t even remember when I had eaten last. I had long ago traded my watch, wedding ring, and mama’s earrings for food. I ran my hand over the brass frame behind the frosty cloth of the bag. ‘O Intercessor, Most Holy Mother of God!’ I whispered with my frozen lips. ‘Save and guard my little ones, my sister Nadya. Save and guard my husband, slave of God, soldier Alexander.’

“’Vat? Somzing wrong?’ came the words just above my ear. I raised my head. Next to the bench stood a German soldier. I could feel sympathy in his words, and answered, “It’s bad.” The German sat down next to me. He set his bulging knapsack on the ground, fished around in it for a bit, then held out his hand. ‘Nimmt!’ There was a square piece of bread on which a slice of lard lay all pink. I took the gift and devoured it. The German pulled out a thermos, poured some steaming tea into the lid, and said, ‘Heiss! Gut!’ Probably he was part of the watch here at the station. He looked about twenty years old, blue-eyed. His face was guileless. Probably his hair was light colored, like my son’s, Andreika’s, only you couldn’t see it under his cap.

“The German pointed to the train engine, then at me, and comically furrowing his brow, apparently trying to find the word, asked, ‘Far?’ “Far! Now I won’t make it there!’ I immediately started telling him that I had hoped to go to my aunt’s but was now left without anything. Ending my story I said, ‘I have children there. Kinder. Understand? I traced with my hands, from high to low. The lad nodded, ‘Oh, ja, Kinder!’ ‘But I won’t reach them. I’ll just freeze.’ I wasn’t even aware that I was crying. The German again reached into his knapsack and pulled out a weighty package. ‘Here. Take.” He opened the package and touched its contents, then licked his finger and said, ‘Gut!’ There was salt in the package. Salt… which was then worth more than gold. For salt you could get bread, milk, well, anything… There was no less than three kilograms in the package. And here he was just handing it over to me, a completely unknown Russian woman. Seeing the shock on my face, the lad smiled and said something I didn’t understand. Then he rose, screwed the lid onto his thermos, put it back in the knapsack, waved his hand, and left.

“’Stop!’ I ran after the soldier. “Was ist es? ‘This icon will guard you all your life,’ I said with firm assurance. He didn’t understand. Again I said, ‘This icon will guard you all your life!’ The lad pulled a chemical pencil out of his pocket, wetted it with spittle, and turning over the board asked me to say it again. As I repeated it slowly, syllable by syllable, he wrote it down on the back of the icon in Latin letters: ‘Eta ikona budet hranit was wsu schizn’. We never met again… But I was able to trade the salt for warm clothes, felt boots, and bread, and I reached Ryazan. In ’45 my husband, Sasha, returned from the war.”

After listening attentively to the agitated woman, I joyfully told her that what we had heard from the representatives at the German consulate who had given the Kazan icon to our church. That German soldier went through the entire war. His comrades died before his eyes; once a truck that he was riding in exploded, but he was able to jump out of it only a moment before the explosion. The rest perished. At the end of the war, a shell hit their dugout, which he had abandoned just a twinkling before. The unseen power of the Russian icon had surely saved him. He now understood and reevaluated very much his life, and his soul opened up to prayer. He returned home, married, and raised his children. He placed the icon in a beautiful glass case in a place of honor in his home, and prayed before it all his life. When he grew old, he commanded his oldest son to take the icon to the Russian consulate after his death. “This icon lived in Russia and should return there. Let them take it to Leningrad, the city that withstood the blockade, dying from cold and hunger, but not surrendering.”

That is how in the mid 1990’s, to one of the newly-reopened churches of St. Petersburg, where the rector at the time was Archpriest Alexander Chistyakov, came the small icon of the “Kazan” Mother of God with a strange inscription in Latin letters on the back. Homily of the Feast of the Kazan Icon of the Mother of God
Commemorated July 8/21, October 22/November 4
Archimdrite Kirill (Pavlov)
Thus we see, dear brothers and sisters, that the main cause of our country’s salvation from destruction was the firm Orthodox faith of our ancestors. When hope in human strength was no more, then all the true children of the Church and Fatherland placed a three day fast on themselves and prayed to the Mother of God before her Kazan icon. Their prayer was heard.
Comments

Helen Taylor11/7/2014 2:25 am
What a miraculous story. I am moved greatly by it. That's the Lord for you having his hand upon you when you believe in him.
thanks for sharing its fabulous
best wishes
Helen Taylor
×