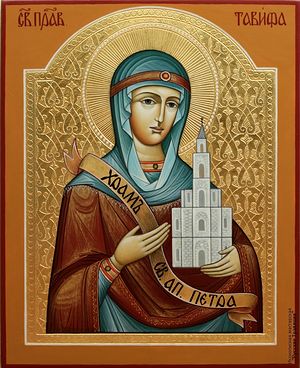 Righteous Tabitha
The Virtuous and merciful woman from the Christian community of Joppa, Righteous Tabitha, sewed clothing and earned her own bread with her handiwork. She also did “almsdeeds”: she sewed clothing for poor orphans and widows. This is all we know about the saint’s life. It seems that these subtle details of the historical Tabitha’s life were intentionally left to us by the hand of God’s Providence. Just a few lines from the Acts of the Apostles (9:36-42)—but these were enough for the Church to glorify the saint as a “true disciple [of Christ] and a spotless lamb.”1 It is enough to know that when she died, the wails of grieving widows compelled the apostle Peter to enter her house, and through the power of God bring her back to life, saying, “Tabitha, arise” (Acts 9:40).

But the saint was silent. She did not dare to take upon herself the load of teaching or apostolic works; she only did her almsdeeds in deep humility, known only to those close to her. She served as she knew how, in the way that God gave her to serve. She was not burdened by the company of people, was not sad about her lowly job, but was simply thankful. And this is the most astonishing thing in the life of any saint—the amazing ability to be silent in the face of the most unpleasant circumstances, the most inconvenient chance situations. The humble acceptance of what happens as being how it should, and gratefulness for everything God sends is the answer of the mighty, but other-worldly. Here the main strength is not judging, not trying to decide for God what is best for our lives, where we can bring the most benefit. When it comes down to it, this silence gives meaning to all the righteous woman’s works and labors. And so we see that the heights of apostolic preaching, the courage of the martyrs, the strength of the desert ascetics—are all absolutely accessible to every Christian by the force of patience and silence, by the force of accepting God as the Master of our lives.

Here we find an amazing pattern in spiritual life. Apparently, at the end of time some will speak assuredly of their grand deeds performed in the “name of Christ,” asking the Creator, Lord, Lord, have we not prophesied in thy name? and in thy name have cast out devils? and in thy name done many wonderful works? But they will hear the reply: I never knew you: depart from me, ye that work iniquity (Mt. 7:22-23). Others, to the contrary, will stand ashamed of their insignificant lives, silently waiting for the Creator’s sentence. And God’s reply to their silence will be astounding: Come, ye blessed of my Father, inherit the kingdom prepared for you from the foundation of the world (Mt. 25:34).

In the life of Righteous Tabitha, the grandeur of the podvig (ascetic labor, feat) of Christian life for God manifests itself with particular clarity. “Rejoice O Tabitha, vessel filled with grace!” we say as we honor her memory. By this is the most essential law of life affirmed again and again—the law that with God there is nothing bad, nothing goes unnoticed, nothing is useless, but everything received from Him with simplicity of heart and humility is worthy of the highest calling: the calling to become a participant in eternity, to be a son of the Most High! On the other hand, no matter how seemingly good and virtuous a deed might be, no matter how society might glorify one or another heroic act or authority, without God it is all worth absolutely nothing, because for eternity—it is futile!

1 From the troparion to St. Tabitha.
See also Saint Philothei: 16th Century Martyr, 21st Century Role Model
St. Philothei's life was not only inwardly holy, however; her actions followed Christ's words, again from the Gospel of John: "By this all will know that you are My disciples, if you have love for one another" .
Comments