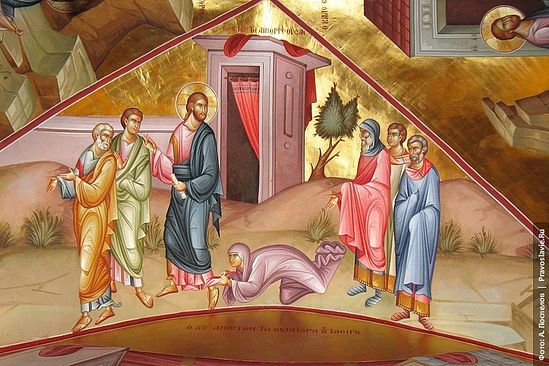 The healing of the woman with the issue of blood.

Today's Gospel concerns two miracles, one the healing of an illness and the other the overcoming of death. These two miracles are closely linked, for both illness and death have the same origin, the same cause, they are both the result of sin, both entered the world as a result of the sin of Adam. As the Apostle Paul says in his letter to the Orthodox Christians in Rome, 'the wages of sin are death'.

Firstly, let us consider the healing of the woman with the issue of blood. We should note that this issue of blood was not that monthly issue of blood suffered by all women, but something else. It had lasted for twelve years. On this subject, it is worth making clear that the monthly issue of blood endured by all women is not of course the result of personal sin, but a result of the general sin of Eve. It is written in the Book of Genesis that women will suffer this as a result of the Fall - 'in pain thou wilt give birth'. It is for this reason that all devout Orthodox women abstain from communion at that time in the month, not because they are personally responsible, but because they know that they are subject to the ancestral sin of Eve. In the same way men are forced into having to work for a living, into 'toiling by the sweat of their brow', as it is written in the Book of Genesis. Both men and women suffer from the Fall, but in different ways.

The issue of blood suffered by this woman was then an illness and it was healed by her touching the fringe of the clothes of Our Saviour, Who, as it is written, felt 'the power go out of Him'. In these words we have a description of the nature of all illness. If it takes the power of Christ to heal an illness, then it is clear that all illness is in fact something negative, a deficiency, the absence of the power of Christ. Illness is not something that is added, it is rather the sign of a lack, of the unnatural and abnormal absence of the grace of God. As we are told in the Gospel when the woman was healed, she was 'made whole'. In other words an ill person - and we are all in some way ill - suffers from a lack, we are not whole, for we lack the fullness of the power of Christ within us.

How and why was the woman in the Gospel 'made whole?' This question is easy to answer, for Christ Himself says to her that:' Thy faith has made thee whole'. In other words, if any of us is to be made whole, to be healed, we must first have faith. If we do not have faith, then we lack something, we are without something, we are faithless or godless. But if we have faith, then healing can be inspired in us by the power of God.

So powerful is this combination of faith and the power of God that it can even overcome death. We see this very clearly in the second miracle, the resurrection of Jairus' daughter. Here was this young girl, twelve years old, dying. We can scarcely imagine the frantic state of mind of her father Jairus, and yet he had faith, for he was seeking out Christ, the Only One Who could heal his daughter. As a result of Jairus' faith and the power of Christ, his daughter was not only healed, but healed from death, that is, actually raised for the dead before the eyes of those who mocked Christ. It is written in the Gospel that, 'her spirit returned to her'. Here is also proof of the existence of the soul. We see that without our souls, our spirits, we are dead.

Today then Christ says to us all: 'Have faith and I will give you all the power that you need to do My will'. Let us heed His words. Healing of the Ten Lepers
Metropolitan Anthony of Sourozh

Healing of the Ten Lepers
Metropolitan Anthony of Sourozh
The Gospel, all the Gospel is a gift of God to us, and although we are not continuously reminded of the need to be grateful, how can we not respond with gratitude to what the Gospel brings to us? God has so loved the world that He has given His only begotten Son that the world may be saved; and the Son has given Himself freely, in the sovereign freedom of His Divinity to us; no-one has taken His life from Him—these are His own words; He gave His life willingly, freely, that we may live. The Centurions’ Intercessors
Fr. Patrick Henry Reardon
To see how this “works out,” let us return to the story of the centurion pleading on behalf of his servant. If we compare the differing accounts of this event in Matthew and Luke, we first observe that Matthew’s is the shorter and simpler version. In this account the centurion simply goes to Jesus, requesting that the Lord speak the commanding word, so that the servant will be healed.

Commentary on the Gospel about the healing of the gadarene demoniac
Newly-discovered texts
Metropolitan Anthony of Sourozh
After the death of Metropolitan Anthony of Sourozh, cassettes were found among his things, with talks on selected parts of the Gospel of St. Mark. We present to your attention one such talk, dedicated to the healing of the Gadarene demoniac.
Comments

Onyango Vinny7/4/2019 11:55 am
Wow! What a powerful teaching and insight! Am truly blessed and motivated as well. God bless you and the work you are doing to save the world from the hand of the devil. Be blessed when you are going out and when coming in in Jesus name.