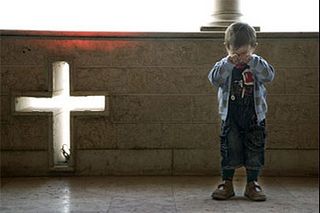 Some Islamic extremists present Christians with an alternative to death: conversion to Islam, or acceptance of a second-class citizenship that sometimes involves paying protection money. Fear that their flocks will be consigned to this second-class status is one of the greatest concerns expressed by Middle Eastern Christian leaders, who understand that it will create unbearable pressure on them to emigrate.

In 2006, Sunni extremists in Baghdad's Dora neighborhood issued a fatwa specifically giving this choice of conversion or death to the two thousand resident Christian families. The neighborhood was emptied of its Christians overnight. One of those who left was Donny George, the former head of the Baghdad Museum who is credited with saving most of its antiquities from looting during the US invasion of 2003. He told me that he fled with his family after receiving a letter repeating the threat and containing a bullet. Like nearly all the other Dora Christians, he never returned. He later died in exile.

In July 2014, ISIS, after declaring the establishment of the Islamic State, told Christians in Mosul to "convert or die," after stamping their homes with a red Arabic "nun" letter, or "N," standing for Nazarene, a term for Christians. The Christians who could, fled, typically only with the clothes on their backs. Those who were too sick or old to leave were forced to become Muslims. All Mosul's churches were shut down and stripped of their crosses, with some destroyed and others outfitted with loudspeakers to call Muslims to prayer and serve as mosques. Neither President Obama nor any member of his Cabinet took note of these developments until ISIS threatened to kill the residents of Sinjar, who were mostly Yazidis.

Some Syrian Christian refugees in Jordan told of a similar experience. As reported by Dutch journalist Martin Janssen (translated by the Reverend Mark Durie, an Anglican priest):

Jamil lived in a village near Idlib where thirty Christian families had always lived peacefully alongside some two hundred Sunni families . . . . One Friday trucks appeared in the village with heavily armed and bearded strangers who did not know anyone in the village. They began to drive through the village with a loud speaker broadcasting the message that their village was now part of an Islamic emirate and Muslim women were henceforth to dress in accordance with the provisions of the Islamic sharia. Christians were given four choices. They could convert to Islam and renounce their "idolatry." If they refused they were allowed to remain on condition that they pay the jizya. This is a special tax that non-Muslims under Islamic law must pay for "protection." For Christians who refused there remained two choices: they could leave behind all their property or they would be slain. The word that was used for the latter in Arabic (dhabaha) refers to the ritual slaughter of sacrificial animals.

According to the account, a number of families began to pay the jizya but, after the amount to be paid kept increasing over several months, the Christians decided to flee, leaving behind their farms and property. Some who could not pay or escape were forced to convert to Islam.

Last February, in Raqqa, Syria, now controlled by the Islamic State as part of its caliphate, a detailed, written "dhimmi contract" was signed by some twenty Christian leaders. (Their blurred signatures appear on the bottom of the contract, found online.) They agreed to abide by Caliph Umar's purported seventh-century rules for "People of the Book," including: bans on renovating and rebuilding churches and monasteries, the public display of crosses and Christian symbols, and the ringing of bells. They are forbidden from reading scripture indoors loudly enough for Muslims outside to hear, and practicing their faith publicly, at funerals or wedding processions, for example. They are prohibited from offending Muslims or Islam. The women must be enshrouded, and alcohol is banned. They must also pay a specified jizya in golden dinars. If these rules are kept, the document states, they have the dhimma, or protection, of the Prophet Muhammad and won't be harmed. If they don't, they will be considered combatants and put to "the sword."

Forcible conversion is also ruthlessly applied in northern Nigeria by Boko Haram. That extremist group will storm a Christian area and systematically go from home to home demanding that every man convert to Islam. On the spot, they kill those who refuse. Habila Adamu was the sole male survivor of such an attack in 2012 in the country's northwestern Borno State. He told me that Boko Haram extremists shot him in the head and left him for dead when he refused to renounce his Christianity. The next morning, his wife took him to the hospital, where he was treated—and acquired the x-rays of his shattered face that confirm his story.

I interviewed Deborah Peter, also from Borno, whose father and brother were shot to death in front of her in the family's living room, on December 22, 2011. In answer to the extremists when they demanded acceptance of Islam, her father, a Christian pastor, began chanting "Jesus." The month before, Deborah said, her father's church had been burned down and the other pastors in the area had fled after receiving threats. The Christian pastor who gave her money to flee from the village was himself gunned down in April 2013.
Boko Haram has killed many, including Muslims whom it perceives as resisting its strict version of sharia. But Christians are an especially endangered species, and they are killed for religious, not political, reasons. In one video rant, Boko Haram leader Abubakar Shekau says: "You Christians should know that Jesus is not the son of God. This religion of Christianity you're practicing is not the religion of God. It's paganism. We are trying to coerce you to embrace Islam because that is what God instructed us to do."

In a new development, thousands of Christians in Iraq and Syria are estimated to have been kidnapped for ransom over the last decade. This pattern has been cited as responsible for driving many Iraqi and Syrian Christians from their homes, though typically only the highest-profile cases make the international news.

For example, over a year ago in Syria, two Orthodox bishops, Metropolitans Mar Gregorios Yohanna Ibrahim and Boulos Yazigi, were taken captive. Their fate remains unknown. An entire convent of Orthodox nuns from the Syrian Christian town of Maaloula was taken hostage by extremists for three months until, according to unconfirmed reports, a ransom was paid.

In Mosul, Iraq, Paulos Faraj Rahho, a charismatic Chaldean Catholic archbishop, was abducted by extremists while he finished the Lenten Stations of the Cross at the Church of the Holy Spirit in 2008. The sixty-five-year-old prelate was found dead two weeks later in a shallow grave, his body marked by signs of torture. In 2006, Father Paulos Iskander, a prominent Syriac Orthodox priest, was kidnapped for ransom and three days later beheaded and dismembered. His captors left a message linking the murder to a papal speech critical of Islam.

There is also the issue of abduction of Christian women for forcible conversion and "marriage" to Muslims. Untold numbers have been victimized this way in Nigeria, Egypt, Pakistan, Syria, Iraq, and elsewhere, and the practice appears to be on the rise. On September 12th, the US State Department reported that, over the last two months, jihadists in Iraq abducted between fifteen hundred and four thousand Christian, as well as Yazidi, women and girls, taking them as "brides" or selling and trafficking them as sex slaves. One young woman told an Italian reporter she managed to contact by cell phone that she hoped the house where she was being held captive, in a village south of Mosul, would be bombed so that she would die rather than live in her current circumstances as a sex slave for Islamic State terrorists. Usually there is no penalty for the abductor and the women are never freed. Vicar of Baghdad: ISIS is beheading Christians, but nobody believes it

Vicar of Baghdad: ISIS is beheading Christians, but nobody believes it (interview)
Much of the media has said that the stories of atrocity are exaggerated, or at least unverifiable. I asked Rev. White if they were true.

Wiping Out the Christians of Syria and Iraq to Remap the Middle East: Prerequisite to a Clash of Civilizations?
Part 1
Historically, the Levant is the birthplace of Christianity and the oldest Christian communities have lived in it and the entire Fertile Crescent since the start of Christian history.
Comments
×