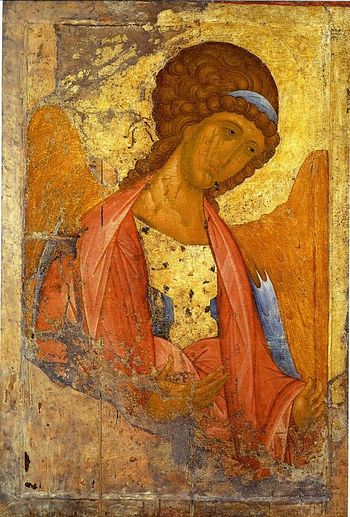 Today, dear brethren, we celebrate the glorious feast of the lightning-like Archangel Michael and all the heavenly bodiless powers. On this day let us talk of the boundless world of the angels; of their nature, of their hierarchy, and of the infinite mercy of God which has added us, Orthodox Christians, to this angelic host and has a formed a single Church made of angels and men; and subsequently of our responsibility to venerate them in a worthy manner and try to emulate them as our future compatriots in the celestial homeland; for which we earnestly pray to God, our common Creator.

St. Cyril of Alexandria says: If our earth, which serves as a focal point between two worlds, carries upon itself such a countless multitude of people and various other creatures, then how many times greater is the number of denizens inhabiting the immaterial heaven, which is so immense and incomprehensible to the mind?

The angels have a spiritual, immaterial, subtle, and immortal nature, free of all corruptibility, but limited, not like that of the Lord Himself, the Spirit – existing everywhere and unique, without beginning and all-encompassing. He brought forth the angels from nothingness into being, sanctified them with His word, and for their steadfastedness against evil confirmed them in the Holy Spirit (i.e. they can no longer fall into sin); their nature is full of wondrous, ever-shining light, holiness, goodness, beauty, wisdom, power, immortality, and an ardent love for their Creator, for each other, and for mankind, over whose salvation they rejoice, and whom they wish to have as their eternal compatriots in the kingdom of eternal light and incorruptibility, peace and joy. St. Dionysius the Areopagite, a disciple of the Apostle Paul who had been raised by the Holy Spirit to the third heaven, heard from him the mysterious teaching on the angelic world, recorded it, and passed it on to the Church.

The angelic world is divided into nine orders, and these are divided into three ranks each. The leading radiant angels (Michael and Gabriel), as the shining dawn of the Most-holy Trinity, stand directly before the fiery throne of God, are illuminated by His light, and pass on the illumination and the knowledge of God’s mysteries to the lower ranks, and the lower ranks are ruled by the higher ones. This heavenly citizenry, this universal, holy, radiant, and blessed assembly of celestial denizens is known as the heavenly hierarchy.

Let us contemplate with wonder God’s all-benevolent and wise providence, His immeasurable bounty, which has destined us for eternal co-habitation and bliss with the angels in our future homeland, and which established a single Church composed of radiant and incorruptible angels, and chosen and worthy humans. What humanly indescribable bliss awaits Christians who are loyal to God, if they remain true to their Christian calling to the very end. In order for us to be worthy of eternal co-existence and blissful life with the angels in heaven, we must honor them, follow their example of holiness, modesty, love, absolute loyalty to God, and loftiness of thought; and we must live in abstinence, prayer, fasting, charity, compassion for one another, and ardent mutual love.
The holy divinely-inspired observers of God’s mysteries and angelic visions – the prophets and the evangelists – saw the angels constantly turning to one another and with one accord singing the praises of the Holy Trinity. This teaches us, too, to treat each other with ardent love and to live in concord, earnestly serving our mutual Creator.

Glory to God’s immeasurable bounty, which prepared for us an eternal kingdom, a kingdom of radiant light, peace, and immovable bliss, together with the countless hosts of angels!

Let us use the small amount of time that we have here on earth to progress in Christian virtue in order to inherit that boundless rapture, and may the Lord grant it to us by the prayers of the Most-pure Theotokos and the intercession of the honorable celestial bodiless powers, especially the radiant, lightning-like Michael and Gabriel, and our holy guardian angels. Amen. Synaxis of the Archangel Michael and the Other Bodiless Powers
All the Ranks of the Heavenly Powers are called angels, although each has its own name and position by virtue of their service. The Lord reveals His will to the highest ranks of the angels, and they in turn inform the others.