Ebola crisis in Sierra Leone and the Orthodox Mission

Ebola and the Rainy Season 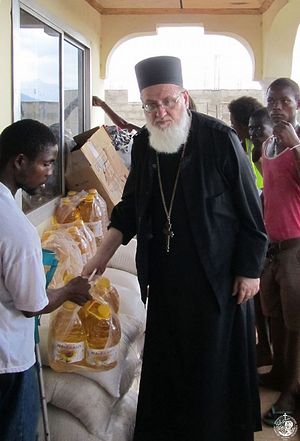 Archimandrite Themistcoles Adamopoulos
It is very early morning here in Freetown. It is dark. Everything is quiet.

Only a few hours ago the whole city was experiencing bright lightening flashes with earth shaking thunder which sounded like canon fire exploding in the air. The rain was torrential. This is the rainy season here in West Africa.

While we do need rain here for the nation’s water supply fore the forthcoming dry season, nevertheless it comes at a bad time, in the midst of the worst Ebola outbreak in history.

You see the Ebola virus survives very well in fluid. So the risk of Ebola contaminated water rises. Once the dry season sets in I believe that the rate of Ebola infection will to some extent diminish. That will be around January 2015.

Sierra Leone Becoming the Epicentre of the Global Ebola Outbreak

The news here in Sierra Leone is unfortunately not good at the moment. Ebola is rapidly advancing and in a very real sense the epidemic is out of control. It is now increasing at nine times the rate of two months ago. Freetown the nation’s capital is fast becoming the global epicentre of the infection . Our situation here can be described as a full blown crisis.

Our neighbour Liberia was the worst affected. It is now starting to steady. International medical help has been very slow in coming to Sierra Leone the new epicentre of the global Ebola outbreak. They are now expecting that the death toll could soon rise up to 1000 per week. This epidemic must be stopped right here in West Africa. There is no other solution. Otherwise this epidemic could easily threaten Europe, North America and even Asia and Australia. 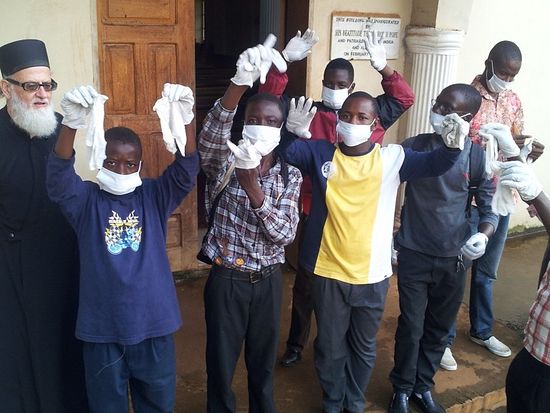 The dead body of an Ebola sufferer represents the most infectious period of the victim. Unprotected contact with an Ebola infrected corpse is suicidal. Consequently family members out of panic and fear may throw the victim’s corpse in the streets where they remain threatening the health of the neighbourhood. We had an incident in Aberdeen a suburb of Freetown, where an Ebola infected body remained lying in the street without being collected by officials. This resulted in a huge demonstration by locals until eventually the body was collected.

Near our compound in Waterloo (on the outer fringes of Freetown) were we are sheltering and feeding over one hundred poverty stricken people, a family died of Ebola. Most of the neighbours ran away in fright. However the bodies of the children remained in the house for several days. It was our Mission’s telephone call that eventually alerted officials to pick up the corpses. Part of the rapid spread of the infection is due to these bureaucratic rapid response lapses.

The local medical infrastructure is simply unable to cope. Ten years of civil war has ensured this. Consequently the Ebola outbreak to now out of control here. It is only through an immediate and momentous international intervention tat some light will be seen at the end of the present dark tunnel. And this is very slow in coming.

The International Community and the Ebola Crisis in Sierra Leone

The international community has let Sierra Leone down. Too little, too late. The World Health Organisation (WHO) has even admitted recently that it underestimated the outbreak when it first began. So a lot of time has been wasted by the world community in coming to our help. In fact the issue was only taken more seriously when isolated cases of Ebola began to occur in Europe and North America. Ebola is the most frightening of all plagues that has now been unleashed upon the West African region. But, I repeat, the local medical infrastructure is simply not equipped to handle this catastrophe. 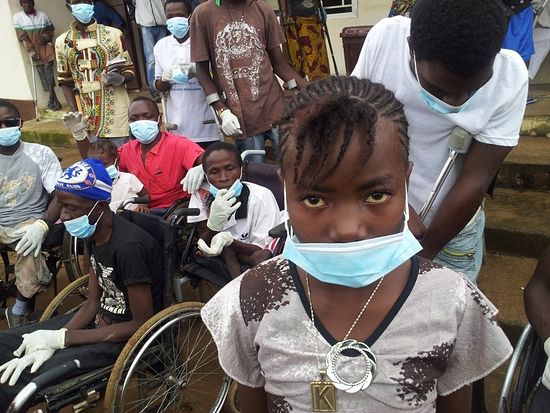 The Orthodox Mission in Sierra Leone and Ebola

However, in the midst of this nightmare I can convey some good news. None of the Orthodox Christian flock and workers here in Sierra Leone have been infected with the virus. And our people here are continuing to partake of Holy Communion without any fear of contamination. This is the level of faith here. Of course, this absence of infection among the Orthodox is the result of the grace of God, in addition to the Mission’s hard work and the assistance of our international supporters and sponsors in Greece and Australia. In this context I would like to express my gratitude to the Orthodox Missionary Fraternity for their financial support during this time of crisis as well as for the forthcoming the shipment of a much needed food container organised by the charity volunteers of their warehouse in Filiron.

The most vulnerable segment of our Mission’s flock is the disabled community that we are housing and feeding in our Waterloo Compound (St. Moses the Ethiopian Orthodox Village) on the fringes of Freetown. A person with disability is in a higher risk category for infection because of reliance on the help of others for his or her mobility.

Since infection by Ebola is primarily from close body contact a disabled person is in a serious disadvantage. Add to this their propensity to beg in the streets of Freetown over the weekends then you have a lethal possibility of contamination. If only one of our disabled residents becomes contaminated then our entire Waterloo compound residents could become Ebola infected – that is well over 100 people (including our nursing staff, clergy security guards and construction workers).

Thankfully, for the time being we have managed to stop them from begging in the streets of Freetown. In a sense we have quarantined them. We have achieved this through education, the distribution of protective items (gloves, face masks, chlorine etc.) increasing our financial assistance and providing them with rice supplies. The forthcoming container from Thessalonica will really help us in this situation.

Living right in the epicentre of the global Ebola epidemic is of course quite challenging. The slightest mistake in one’s daily routine can be fatal. Sometimes I wake up in the morning with a cough, or any other unusual symptom and I think to myself: “This is it, I have Ebola.” But then I realise to my relief that the true symptoms are not there – no fever, no vomiting, no diarrhoea etc.

People from abroad constantly call me and ask me: “Father, why don’t you leave and save yourself from a potential infection and even death?” The answer is very simple. For the present time God has placed me here in West Africa. As the shepherd of the flock in Sierra Leone it is my duty to stay with them, to care for them, to instruct them, to console them, to guide them and to protect them from an evil that kills without pity. Furthermore our Lord Jesus Christ instructs the Christian shepherd not to abandon the sheep when danger comes It is only the hireling who abandons the sheep in moments of crisis (St. John 10.12-13.) We are relying on Christ’s protection. 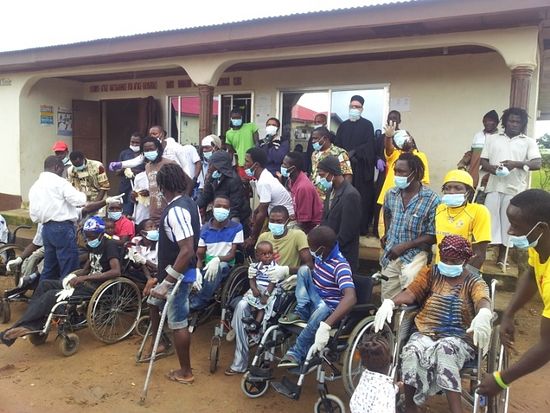 A Note of Gratitude

Once again I would like to express my sincere gratitude to all of our Mission’s friends in Greece and especially the Orthodox Missionary Fraternity for the continual support. You were among the first international groups to send assistance here in Sierra Leone during the Ebola crisis. Bravo! We now await with great anticipation and gratitude your container of emergency food.

We ask for your prayers and continued support as we enter the most critical and dangerous period here. marina11/21/2014 12:16 am
Would it be possible to get Archimandrites Adamopoulus email address please..
thanking you
marina

Priest Nikolai11/20/2014 9:18 pm
I'm rather confused by that question. As Fr. Themistocles is not a Greek citizen, what reason would Greece be a preferable missionary field over Africa?

J Clivas11/20/2014 2:51 pm
Aren't there people in Greece who could benefit from your missionary work? What is this overweening focus on Africa?
×