Twenty-sixth Sunday after Pentecost. Eat, Drink, and Be Merry

From The Explanation of the Gospel of St. Luke by Blessed Theophylact, Archbishop of Ochrid and Bulgaria

Luke 12:16-21. And He spake a parable unto them, saying, The ground of a certain rich man brought forth plentifully, and he thought within himself, saying, What shall I do, because I have no room where to gather my crops? And he said, This will I do: I will pull down my barns, and build greater; and there will I gather all my fruits and my goods. And I will say to my soul, Soul, thou hast much goods laid up for many years; take thine ease, eat, drink, and be merry. But God said unto him, Thou fool, this night they shall require thy soul of thee: then whose shall those things be, which thou hast prepared? So is he that layeth up treasure for himself, and is not rich toward God. 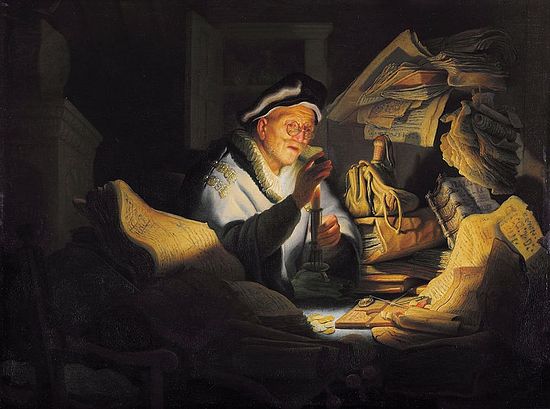 The Parable of the Rich Fool by Rembrandt, 1627.

The Lord had said that the life of a man is not lengthened by an abundance of possessions, and now He offers this parable in confirmation of this truth. See how He describes for us the insatiable thoughts of the foolish rich man. God did His part and showed His mercy; for all the ground of the rich man brought forth plentifully, not just one of his fields. But the rich man himself bore so little fruit from the mercy shown him that even before he had gathered the crops, he imagined them already locked up for himself. See also the pleasures of the rich man: What shall I do? Does not the pauper say the same thing as well, "What shall I do? I have nothing to eat or to put on." Think, if you will, about the words of the rich man. What shall I do, because I have no room where to gather my crops? At the very least, he could take a good rest. If both the pauper says, "What shall I do because I have not?" and the rich man says, "What shall I do because I have not?" then what do we gain by gathering more and more? We do not gain any rest, and it is clear from all the cares that come from our further efforts that we are piling up for ourselves only a great multitude of sins. Yet the foolish man says, I will pull down my barns, and build greater. And if your land yields even more bountifully in the future, will you pull these down and build again? But what need is there to pull down and build? You have available to you as storehouses the stomachs of the poor which can hold much, and are indestructible and imperishable. They are in fact heavenly and divine storehouses, for he who feeds the pauper, feeds God. See something else that is foolish: my fruits and my goods. The rich man did not consider that he had received these things from God. If he had, he would have treated these things as would a steward of God. But he imagined that these things were the fruits of his own labors, which is why he usurped them for himself, calling them my fruits and my goods. "I am the sole owner," he thinks, "and there is no one else entitled to a share. These things are not Godâ€™s, but mine, and therefore I alone will enjoy them. I will not now take God in as a partner to enjoy my profit." Because he spoke foolishly, let us see what happened. Soul, thou hast much goods laid up for many years. He determines that he will have a long life, as if length of years was something else he could obtain by working his land. But a long life is not a crop you can grow, and it is not another of your belongings. "Eat, drink, and be merry. Three cheers for the good things of my soul!" But to eat and drink are the good things only of an irrational soul. Because this man has an irrational soul, it is fitting that he plans to reward himself with these things. But the good things of a rational soul are to understand, to reason, and to be glad in the law of God and in good thoughts. Do eating and drinking not suffice for you, 0 fool, but you must also order up for your soul that which accompanies these things, namely, shameful and base pleasure? Euphemistically did the Lord employ the words be merry, indicating by them the most wanton passions which are the consequence of too much food and drink. But God said unto him, Thou fool, this night they shall require thy soul of thee. The words God said unto him do not mean that God conversed with the rich man, although the parable puts it in this form. Instead, the thoughts that came into the mans mind are what God spoke. Thou fool. He calls him a fool because everything he wanted was foolish, as we have shown. And every man like him is foolish and acts in vain, for, as David says, In vain doth every man disquiet himself [Ps. 38:14]. Why? Because he stores up things without knowing for whom he gathers them. How can he not be called a fool who does not know that the length of a manâ€™s life rests with God alone and that no man can set the limits of his own life?

Notice also the words, they will require. Like some stern imperial officers demanding tribute, the fearsome angels will ask for your soul, and you will not want to give it because you love this life and claim the things of this life as your own. But they do not demand the soul of a righteous man, because he himself commits his soul into the hands of the God and Father of spirits, and he does so with joy and gladness, not in the least bit grieved that he is handing over his soul to God. For him the body is a light burden, easily shed. But the sinner has made his soul fleshy, something in substance like the body and like the earth, rendering it difficult to separate from the body. This is why the soul must be demanded of him, the same way that harsh tax collectors treat debtors who refuse to pay what is due. See that the Lord did not say, "Ishall require thy soul of thee," but, they shall require. For the souls of the righteous are already in the hands of God. Truly it is at night when the soul of such a sinner is demanded of him. It is night for this sinner who is darkened by the love of wealth, and into whom the light of divine knowledge cannot penetrate, and death overtakes him. Thus he who lays up treasure for himself is called foolish: he never stops drawing up plans and dies in the midst of them. But if he had been laying up treasure for the poor and for God, it would not have been so. Let us strive, therefore, to be rich toward God, that is, to trust in God, to have Him as our wealth and the treasury of wealth, and not to speak of my goods but of "the good things of God." If they are Godâ€™s, then let us not deprive God of His own goods. This is what it means to be rich toward God: to trust that even if I empty myself and give everything away, I will not lack the necessities. God is my treasury of good things, and I open and take from that treasury what I need. The Rich Young Ruler (Luke 18:18-27)
Fr. James Blomeley
Understanding that kind of thought provides a way to approach the issue of wealth, and indeed, all of life. In his exchange with the rich young ruler, Jesus is not engaged in economic analysis, but instead in the diagnosis and treatment of souls. Met. Ephrem on the Rich Man and Lazarus
Metropolitan Ephrem (Kyriakos)
One might wonder what that rich man did to go to torment. Did he do something evil to Lazarus? He did not harm Lazarus and did not do or say anything to him. So what is the mistake that the rich man made?
Comments
×