Following the fall of Constantinople, the Greek Orthodox Church was both protected and restricted by the decrees of Fatih Sultan Mehmed 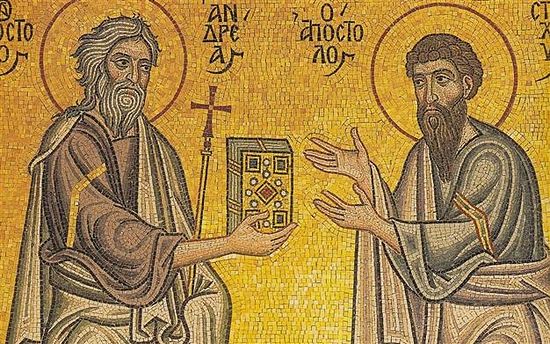 St. Andrew the Apostle (left) with his disciple and successor St. Stachys, the first bishop of Byzantium.

The Feast of St. Andrew, one of the apostles of Christ and the founder of the Church in Byzantium in the 1st century, will be celebrated on Nov. 30. This year’s celebration has special significance as Pope Francis will be attending. While it is not the first time that the head of the Roman Catholic Church has visited and met with the leader of the GreekOrthodox Church, The meeting comes at a time when discussions to resolve doctrinal differences that have lasted for centuries are being held between the two Churches.

Discussing these differences is beyond the scope of this article, the purpose of which is to relate the history of the Greek Orthodox Church under Ottoman rule: The years between 1453, when Constantinople was conquered, and 1923 when the Ottoman Empire ended.

Following the fall of the city, Fatih Sultan Mehmed decided to provide the members of the Greek Orthodox community with its own leaders. He hoped that this way he would gain their loyalty and encourage the members of that community who had fled to return and help repopulate Istanbul. Fatih Sultan Mehmed polled what remained of the Church’s hierarchy, who settled on a monk named Gennadius, (original name George Scholarius). He had been taken captive after the conquest and sold as a slave. However the sultan had him found and in January 1454, he was consecrated and installed as patriarch.

According to German historian Franz Babinger in the book “Mehmed the Conqueror and his Time,” Mehmed ordered a document issued to Gennadius to the effect “that no one should vex or disturb him; that unmolested, untaxed and unoppressed by any adversary, he should, with all the bishops under him, be exempted from all taxation for all time.’” In addition, no churches were to be turned into mosques, no one was to interfere in church rites, and they would be allowed to celebrate Easter freely.

In spite of the supposed prohibition against turning churches into mosques, Sultan Mehmed and future sultans didn’t hesitate to turn churches into mosques whenever they wished it. And when government officials wanted to do so, it required the sultan’s permission. The patriarchate itself was moved to five different places after it had to leave Hagia Sophia, two of which happened because the sultans wanted to use the location for a mosque. It wasn’t until 1601 that the patriarchate finally settled in the Church of St. George, where it still resides. During the reign of Fatih Mehmed, only four churches were converted in addition to Hagia Sophia. These were Pantokrator (Zeyrek Mosque), Christ Pantepopt (the Old Soup Kitchen), Kyriotissa (Kalenderhane Mosque) and San Domenico (Arab Mosque).

The Church of Sergius and Bacchus, known today by its Turkish name of Little Hagia Sophia, was converted to a mosque in the first quarter of the 16th century at the request of Hüseyin Ağa, the Chief Black Eunuch. One of the earliest post-conquest, western writers, Petrus Gyllius, interestingly describes the Byzantine aspects of the church, completely ignoring any additions when it might have undergone after its conversion. A French topographer, Gyllius, lived in Istanbul from 1544 to 1547 (or possibly 1547 to 1554) and described many buildings and Greek churches in his book on Istanbul’s historic works. If he deplored the conversions, he kept his thoughts to himself.

Gyllius wasn’t the only traveler who wrote about the Greek Orthodox churches. An Austrian, Hans Dernschwam was there from 1553 to 1555 and later Stephan Gerlach visited between 1573 and 1578. Russian Tsar Ivan Vasiliyevich (or Ivan the Terrible as he is known in the West) in 1583, just one year before his death, sent a man named Tryphon Korobeinikov to Istanbul because he wanted to give money to the OrthodoxChurch. Korobeinikov again visited the city in 1593 to donate money to the churches and to that end he drew up a list of churches in old Istanbul and Galata. There were 46 or 47 churches on his list which also included the names of the priests and districts. A few years later Antonios Paterakis of Athens listed 55 churches but of these 47 were on Korobeinikov’s list plus eight in nearby villages. Later writers gave different figures and one has to take into account that some churches were destroyed in one of the many fires that occurred in the city. Manouiel Gedeon states that 21 churches alone were burned in the 18th century.

There were certain restraints placed on the Greek Orthodox. For instance, churches could be repaired or rebuilt but no new churches could be built. New materials couldn’t be used although this prohibition was lifted under Grand Vizier Köprülü Fazıl Mustafa Paşa in the second half of the 17th century. The German architecture historian and Byzantinist Wolfgang Muller-Wiener also stated that building domes in the churches was forbidden, perhaps to ensure they couldn’t be mistaken for mosques. Even then the sultan’s permission was required. The style that evolved continued the basilica form (a central nave and two side aisles) from the Byzantine era so they often were very low and unimposing structures.

Changes in the 19th century

According to sources, there are 94 Greek Orthodox churches left in Istanbul today, 84 of which are attached to the Greek Orthodox Ecumenical Patriarchate in the Fener district. Most of them were built in the 19th century, and the increase in numbers started with the efforts at westernization known as the Tanzimat [in Turkish] which began with the Proclamation of Gülhane Park in 1839 and ushered in a reform period.

Most of the church buildings from the 19th century are not particularly distinctive, with the exception of Hagia Triada Stavrodromiou (Church of the Holy Trinity of the Crossroads) just off Taksim Square. It is well-named since a person can go almost anywhere in the city from the square. The edifice was completed in 1880, funded by donations solicited from wealthy Greeks as it cost much more than originally estimated. It was and still is the largest Greek Orthodox Church in Istanbul and its opening was attended by many people. Thanks to the reformation attempts of the Ottomans, the Hagia Triada has a dome, the first such dome built since the conquest of the city in 1453.

Elizabeth Dodge Huntington, who was a member of the board of Robert College and theAmerican Hospital, wrote in Istanbul 1920 on “Social Organizations,” three years before the end of the Ottoman Empire, saying of the Greek Orthodox churches the following: “The churches are mostly made of stone or brick [covered with] plaster. The outer façade of the buildings are generally painted blue and white and the interiors are very decorated. All of them are clean and kept up and the interiors, except in the old ones, are well-lit. Chandeliers hang from all of their ceilings; in one section there are fake candles which are illuminated with electricity … In the churches there are many pictures and countless icons covered in heavy silver.” Huntington could have been writing about the churches today, for little has changed over the more than 90 years that have passed. The Church from Byzantium to the Ottomans

The Church from Byzantium to the Ottomans
If the Eastern Orthodox Churches had not split from the Roman Catholic Church in 1054, the Ottoman Turks would have found it much more difficult to conquer Constantinople. BBC News' 'Ottomans Europe's Muslim Emperors': Putting a Positive Spin on Conquest
The series also digs into inter-Muslim disputes, between Sunni and Shia, between Turks and Arabs, that can shed some light on the endless Muslim-on-Muslim violence that plagues the Middle East to this day. And it clearly shows that persecution of Christians, genocide of Christians, abuse of Christian children and women, and so on, is nothing new.