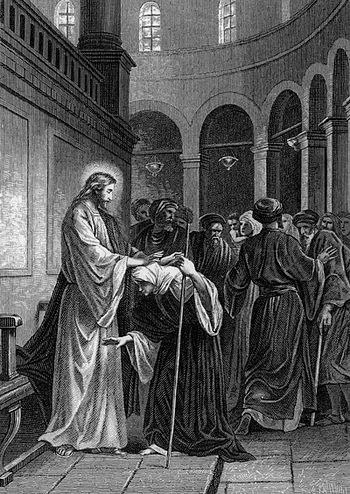 Dear Brethren, God loves nothing more than He loves man, and hates nothing more than He hates hypocrisy. When our Blessed Savior, Jesus Christ, was here on earth, He was full of love and mercy toward all men; only towards the hypocrites did He appear harsh and demanding. All of the sinners who came to ask His forgiveness He freely accepted, and with unspeakable goodness; but the hypocrites, who externally appeared to the people to be saints and men of kindness, these Jesus sorely chastened, even beating them with whips. Let us hear the words of today's Holy Gospel (Lk. 13:10-17).

That sick woman who found her way into the synagogue that Sabbath (Saturday, the Hebrew day of rest) is a good example for each of us. Following her good and pious example, we should come to church each Sunday, for prayer and the preaching of God's Word (the sermon). It was for these two reasons that this woman went to the synagogue—this poor creature who was so bent over in pain that she could not straighten herself even to walk. She came to find consolation—the strength to bear her pains and her afflictions—and she found much more than she was expecting to receive. She was completely healed of the illness that had troubled her for eighteen years. Picture her, listen with repentance to the sermon of the Lord Jesus Christ. Sitting in some obscure corner of the synagogue, she was asking the mercy of God, and God prepared her to accept the Divine Grace. When, at the close of the sermon, she approached our Lord, He beheld not only her bowed body, but her soul bowed in deep repentance. He spoke to her: "Woman, you are free from your sickness." Then, in order that the Divine, lifegiving power might be transferred, He touched her with His holy hands. And because the words of God are in themselves Divine acts, the woman was instantly healed. Behold, dear Christians, how the love of God is manifested and poured out to men. No obstacle can come between God and the man who is asking His help. Not even the Sabbath. For the Law, the Commandments, and even the Sabbath, were created for man, and not man for them. Indeed, God's very laws and commandments are embodiments of His Divine Love for men. The same should be true of human laws, which must be for man's own good, not for his enslavement—otherwise they become unrighteous and inhuman. Laws are made for evil people, in order to prevent them from performing their deeds of darkness. Good people, righteous people, need no laws. "It must be remembered, of course, that laws are made, not for good people, but for lawbreakers and criminals, for the godless and sinful, for those who are not religious or spiritual, for men who kill their fathers or mothers, for murderers, for the immoral, for sexual perverts … for those … who do anything else contrary to the true teaching" (I Tim. 1:9-10). For Good men, that is, for Christians, there exists but one law, the Law of Love. This Law is positive in its nature; it not only forbids the bad, it encourages positive acts of goodness. Nothing can resist this Law. Yet there is much that would keep us from the good. First and foremost is hypocrisy. What is hypocrisy? Hypocrisy is the sin of pretending to be upright and good, while inside we are rotten and sinful. In other words, hypocrisy is giving others the impression that we are something which, in reality, we are not. Hypocrites pretend to be concerned about the Law and the Commandments, but only so that they might frustrate the good. They would appear to men as guardians of the Divine Law, and those who fight for the preservation of human law, while in reality they wish only to uproot, burn, and destroy the very foundations of society. The hypocrite does not care if men lose their lives, if injustice appears as truth, if innocent people are crucified, if venerable institutions are demolished, and the fact that the Devil is dancing as he beholds all this only delights the hypocrite.

The official of the synagogue, had he been able to, would have killed Jesus and the sick woman both, and all for the sake of the Sabbath. He was not moved at all by the healing, right in front of his eyes, of the woman whom he surely knew to have been ill for years. He felt for Christ only hatred and envy. But he knew well how to cover up his passions, and to appear before men to be concerned only with God's Sabbath, all the while rejecting God's Christ! Probably the people who knew this official fell for his act completely—but not Jesus. He openly called him a hypocrite and impostor; a liar and actor, who feels one thing, and says another thing.

Unfortunately, dear Christians, we have many such hypocrites today. We must be on guard to detect them. Externally, they appear to be saints, while inwardly they are full of evil. Yet, very skillfully they mask their true feelings in front of people; they cover themselves with the cloak of piety, and at the same time are ready for any evil. If you offer them a word of advice, they will not heed it. If you do for them a deed of kindness, they will feel no obligation. They cry loudly on behalf of the Law, the Commandments, the Holy Canons, order, and truth; yet they do not believe in their own words. No one denies the value of the Law, the Commandments, and the Canons. But, on the other hand, do not these exist for men, and not men for them? What good does it do to preach the Commandment "Thou shall not kill", if we will kill our fellow man regardless? What good is it to scream about the Canons, if thereby we are destroying the Church? Concerning Law, order, and truth, it is generally accepted that the people who cry the loudest for these things neither know nor respect them themselves. They only speak; they preach, but do not practise.

Dear Christians, Jesus Christ loved and still loves all sinners, the tired, the sick, the humble. He even loves the hypocrites, but He hates their hypocrisy! And the hypocrites hate Christ, for love and hypocrisy cannot co-exist. They are mutually exclusive.

Let us have love for one another, and by this we will prove that we love God, and that we honor the Sabbath. If we only appear to seek God, while in reality we hate both Him and our fellow men, we may be sure that we are hypocrites. We have no regard for God, nor for His commandments, despite our lofty words to the contrary. We are liars. The commandments of God and the canons of the Church are love; let us love, in order to possess life and salvation.

Sermon on the Healing of the Woman with the Issue of Blood
Twenty-Third Sunday After Pentecost
Archpriest Andrew Phillips
Today's Gospel concerns two miracles, one the healing of an illness and the other the overcoming of death. These two miracles are closely linked, for both illness and death have the same origin, the same cause, they are both the result of sin, both entered the world as a result of the sin of Adam. As the Apostle Paul says in his letter to the Orthodox Christians in Rome, 'the wages of sin are death'. The Centurions’ Intercessors
Fr. Patrick Henry Reardon
To see how this “works out,” let us return to the story of the centurion pleading on behalf of his servant. If we compare the differing accounts of this event in Matthew and Luke, we first observe that Matthew’s is the shorter and simpler version. In this account the centurion simply goes to Jesus, requesting that the Lord speak the commanding word, so that the servant will be healed. Homily on Wednesday of the First Week of Great Lent. On the Danger of Hypocrisy
St. Ignatius (Brianchaninov)
Vainglory and its offspring, hypocrisy, are ruinous at their very root—they deprive a person of all heavenly reward, representing the vain human praise he has chosen and desired as the only reward. The Lord condemned vainglorious hypocrites.
Comments
×