St. Oda of Brabant, the Blind Princess of Scotland 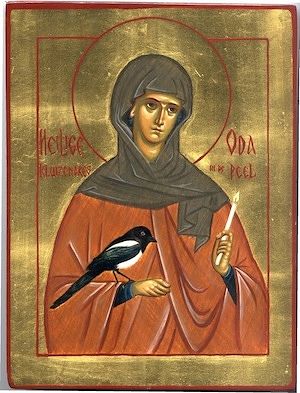 St. Oda of the Peel. Icon by the Convent of the Nativity of the Mother of God, Asten, the Netherlands.
After St. Hubert (Nov. 3/16) had in December 718 solemnly translated the relics of St. Lambert (Sept. 17/30) from Maastricht to Liège (Belgium), many miracles took place at the grave of the bishop-martyr. The stories about miraculous healings spread like wildfire. People who had been ill for years and had received no benefit at other holy places, not knowing what else to do, visited the grave of this saint. Many were healed at St. Lambert’s grave.

The stories about the miraculous healing power of St. Lambert also reached Scotland, where people for years had tirelessly called on the aid of all the saints for the healing of Oda, the beautiful daughter of the king. Her sweet face especially attracted attention even though her eyes were lifeless. The young maiden had never seen the light of day. Her parents had gone on many pilgrimages in Scotland, as well as, to England and the continent. As soon as the miraculous accounts about St. Lambert reached the Scottish court, the royal couple decided to send their daughter to Liège.

Oda arrived in Liège amid a great company of other pilgrims. She prayed and kept vigil immediately on the night of her arrival at the grave of St. Lambert. Toward morning she fell asleep. When she awoke, she saw the sun shining for the first time in her life. Grateful for the miracle that God had performed through St. Lambert, Oda promised to dedicate the rest of her life to the service of God.

Much was spoken about her miraculous healing after she returned to Scotland, but also much was spoken about her exceptional beauty which now could be called almost perfect. Within a short time, knights, counts, dukes, princes and even kings paid their respects to the Scottish king and asked for the hand of his daughter. Although Oda had clearly let her father know that she was not interested in marriage, her father paid no attention to her wishes. He chose a husband for her and set the wedding date. Seeing no other alternative, she and her faithful maid left the palace secretly in the middle of the night.

The two pious and God-fearing women wandered through England, crossed over to the continent and traveled via France to Italy. In Rome they visited the graves of the apostles Peter and Paul. Next they traveled south to Monte Gorgana in Apulia, where in 390 the Archangel Michael had appeared to a shepherd and where a shrine still stood. At that shrine, Oda cut a sturdy reed stalk which was a support for her for the rest of her life.

Next the women set their course toward the north. After journeying through the Alps and the Ardennes, they followed the Maas River downstream, until they came to the vicinity of Venray. They hoped that they could live the rest of their lives in peace and quiet in the service of God in the remote Peelland .

Their presence did not remain unnoticed. The many birds that twittered around their hut descending to retrieve food scraps and bread crumbs attracted the attention of the inhabitants in the area. People from the surroundings came to take a look. That was not so bad because they left the women in peace. But the young men in the neighborhood became very interested in Oda who was exceptionally beautiful and they began to cause difficulties. Finally, Oda and her maid fled the area.

They built a new hut in the vicinity of Weert—in the middle of a moor. In order to protect their humble shelter from the wind, hail, rain and snow and to hide from the view of the world, Oda planted some bushes. The following day they had already grown into a thick hedge. In this way, God protected his handmaidens.

In the meantime, her father was searching for her. After much wandering he arrived at the inn in Weert. When he paid his bill, the inn-keeper commented that he had paid with the same kind of coins as had the recluse who lived in the moor. St. Oda’s father understood that his daughter must be somewhere in the area. When he came near to her hut, he was attacked by magpies. As hard as he tried, he was unable to see his daughter. Finally, he returned to Scotland without having accomplished his goal.

Although God had protected His handmaiden, St. Oda did not feel safe anymore in that place—she was now alone as her maid had died during this time. Moreover, more and more people came to her asking for advice and counsel. Therefore, she decided to go deeper into the wilderness. She built, for the third and last time, a hut about 7 kilometers north of present-day Eindhoven. She reposed there around the year 726.

When she died in the middle of the night, a bright light was seen rising from her hut toward the heavens. The inhabitants thought that her house was on fire and came to help. They dug a grave there for the pious virgin. God granted many miracles to occur there, so that numerous pilgrims began visiting her burial place. The land on which St. Oda’s hut stood belonged to a noblewoman from Rode. As soon as she heard about these miracles, she had a church built over St. Oda’s grave. In the course of time, many more people came to live in and around this area which now bears the name: St. Oedenrode. Holy Hierarch Kentigern (Mungo) of Strathclyde, Bishop of Glasgow, Wonderworker
Commemorated January 13/26
Dmitry Lapa
St. Kentigern was much loved and venerated by the people for his gift of working miracles. Once he brought back to life a tame robin of St. Serf, which had been killed by jealous monks. Another time he miraculously lit a fire in St. Serf's monastery, which had earlier gone out.
Comments
×