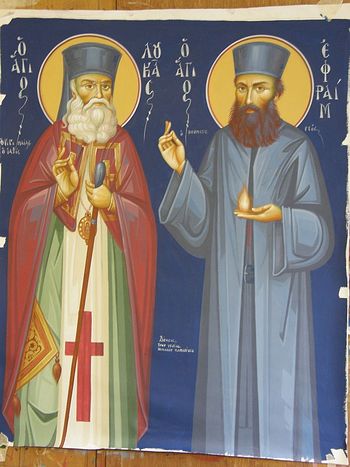 St. Luke the Surgeon and St. Ephraim of Nea Makri

"My name is X. P., I am 46 years old, and I live in Northern Greece. In 2004, I was operated on for a brain tumor. After three and a half years, it appeared again. I visited plenty of doctors, but none would agree to operate on me. I was very depressed and disappointed. Ultimately, I found a doctor who agreed to dare to try this difficult intervention. My relatives told me to go venerate St. Luke, who was a physician, and that he would help me, like he helped the others. I made the decision and went to venerate and to pray in the city G. where there is a church of St. Luke. There, I met a pious and humble priest, Fr. K. He gave me strength and courage, and served the Paraklesis for me. I confessed, communed, and left for surgery. One night, I saw in my dream St. Ephraim, and he told me not to worry, and that everything would go well.

On March 13th 2007 I entered the operating room. Even though I was sedated, I could see the doctors that were operating on me, together with St. Luke and St. Ephraim. St. Luke was operating, wearing small circular glasses, and holding an old scalpel. St. Ephraim, however, was holding my hand, telling me not to be afraid, and with his left hand bombarded my head with light. When the surgery finished, I went to the ICU, and again St. Luke appeared before me, telling me: “I was there with you in the operating room.”

Exiting the operating room, I heard my surgeon tell me: “This is the first time I had such and easy surgery.”

I want to note that I knew nothing about these two saints [before they appeared]. From then on, they became my guardian angels." J dean12/31/2014 10:09 am
St. Luke also provided a new job for myself and for a friend who had been looking for a job unsuccessfully for many yrs. His relics came to my parish and desperately I pled with St. Luke for a resolution to our intolerable circumstances. The next day both of us received new jobs.
×