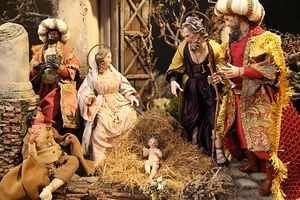 Christmas carols echo reality for most Americans, who believe in the historical accuracy of several Gospel descriptions of the birth of Jesus Christ.

About 73 percent of all respondents said they believe Jesus Christ was born to a virgin, while 74 percent believe an angel announced Jesus’ birth to shepherds, 75 percent believe in the visit of the wise men, and 81 percent believe the infant Jesus was laid in a manger.

Women and older respondents were somewhat more likely to profess their belief in the Virgin Birth, as were frequent church attendees and those who had a high school education or less.

Even among those with no religious affiliation, about 30 percent believe in the Virgin Birth.

The survey of 1,507 U.S. adults was conducted Dec. 3-7. It claims a margin of error of plus or minus 2.9 percentage points for the entire sample.

It also asked respondents about their favorite holiday activities and how they felt about gift giving.

About 48 percent of Catholics said they looked forward to attending religious services as a part of their holiday activities, compared to 57 percent of Protestants.

The survey found that most Americans generally approve of religious symbols like Nativity scenes on public property, though some said such scenes should be accompanied by symbols of other religious faiths. Orthodox Christmas, a Message for Humanity
We would listen attentively as he recounted how Jesus birth was synonymous with humility, compassion, love, understanding and peace in the world and that he came here to baptize mankind in the virtues that had vanished after Adam. Perhaps the deepest spiritual meanings were beyond our comprehension but, in our eyes, my father's words, spoken as they were, brought to life the true magic of the event.
Comments
×