Source: THE TIMES OF ISRAEL 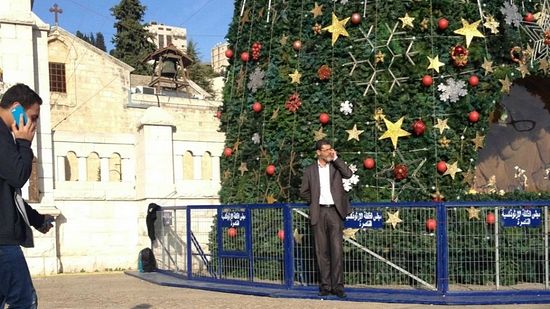 Christmas is just a few days away, and Nazareth — the childhood home of Jesus — is busily readying itself for the party of the year.

Festivities started Wednesday evening with the start of the city’s annual Christmas market and the lighting of a 25-foot-high artificial tree in the heart of downtown Nazareth, accompanied by outdoor performances throughout the historic town’s narrow streets and alleyways.

“It’s a huge event,” said Nazareth’s director of cultural affairs, Khaled Buttu, in the center of the main square with the famed Greek Orthodox Annunciation Church behind him.

Cafes and restaurants at this time of the year are full, as customers sit around drinking espressos and glass cups full of thick Turkish coffee. Kids just out of school and parents with toddlers in tow stroll through the busy square, peering at the market kiosks selling candied apples, fresh popcorn and crisp potato pancakes as well as ethnic jewelry, clothing and Christmas decorations. 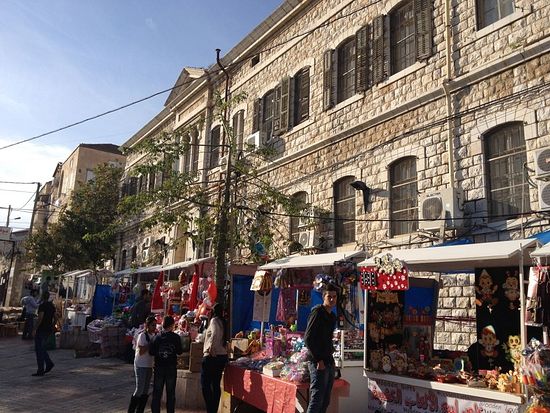 Kiosks selling everything from candied apples to Palestinian jewelry line the streets of Nazareth (photo credit: Jessica Steinberg/Times of Israel)

Someone dressed in a Sponge Bob costume danced outside one of the stores, bouncing to the beat of “Jingle Bells.”

Last year, there were 80,000 people in Nazareth to celebrate, said Buttu. That’s a huge number of visitors for a city of 125,000 (its population is nearly doubled when you add the residents of Upper Nazareth, the mostly Jewish town next door).

Shlomi Cohen, a burly senior police officer who was checking in with Buttu, verified the 80,000 head count.

“It’s for sure the biggest event in the area,” said Cohen. “It’s far bigger than the Carmiel dance festival,” an annual, three-day folkdance festival each July that draws tens of thousands of visitors. “But that’s nothing like this.”

All of Nazareth comes out for the market; so do Israeli Jews. Buttu surmised that around 60 percent of last year’s visitors were Jews coming to experience some Christmas spirit. 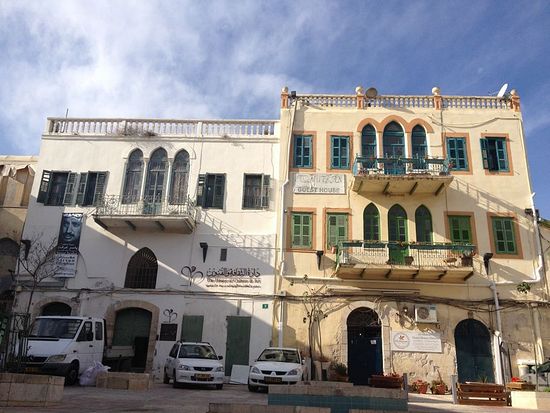 “For them, it feels like they’re abroad, in Italy or Spain,” said Emil Emran, a Nazareth local who manages Al-Mutran, a small, 12-room hotel situated in a 150-year-old villa in the market quarter of the city. The hotel’s quaint lobby is dominated by a tall, decorated Christmas tree, although most of the hotel guests tend to be Israelis, said Emran, even during Christmas.

“I have a group from Hebrew University coming right now,” he said, glancing at his watch. “This professor comes every year with his class to do a tour of the churches.”

“We get everyone, French, German, Spanish, but we always have Jewish guests,” he said. “We didn’t think it would be like that, but they’re the regular visitors.”

Despite the steady arrival of Israelis who want to don Santa hats, tour churches and hear “Jingle Bells,” the Arab city is still a complex combination of ancient and modern, with a mixed population of Muslims and Christians. While 69% of the population is Muslim, the Christian minority and a steady stream of tourism geared toward the Christian sites has had a strong influence on the city.

There’s a strong secular feeling in the city. Many women dress in pants, their tight jeans tucked into knee-high boots, their hair usually uncovered. At night, some residents head out to one of the local, much-written-about Nazareth restaurants situated near the churches, where they dine on local delicacies and drink shots of arak, an anise-flavored alcoholic drink.

The city is more exciting than it used to be, said Maisoon Zoabi, who works for Israeli Arabic news site Bokra.net.

While walking around downtown Nazareth, Zoabi stopped at a kiosk selling clothing embellished with hand-embroidered Palestinian designs. The items are all hand-embroidered in Beit Jalla according to his mother’s designs, said merchant Ayman Qassasfa. 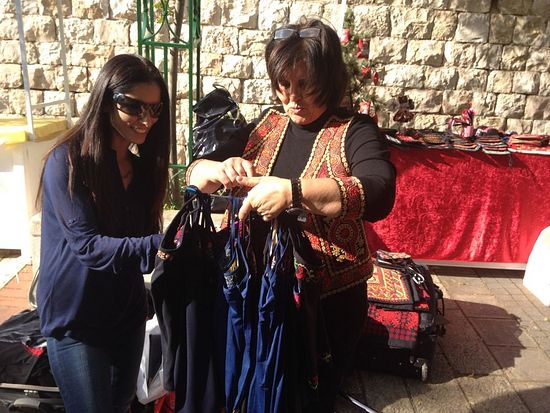 One of the locals who helped push the idea of the market and year-round tourism is Ghada Zoabi, the Nazareth-based founder of Bokra.net, one of the sponsors of the fair.

“We didn’t have a tree, or a formal tree lighting before this,” said Zoabi. “Now we have Israeli politicians coming to visit, to see what’s going on here,” she said.

“All of this says that Nazareth is reliable, that people can come here,” added Buttu. “It translates into coexistence.”