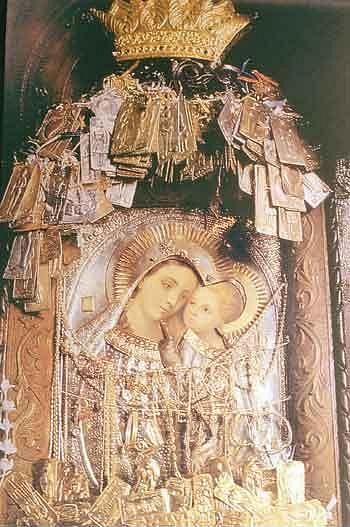 The Panagia Giatrissa Icon (All-Holy Virgin “the Healer”) is a well-known wonder-working image in Greece. In the early hours of December 24th 2014, another miracle was added to the list attributed to the holy icon.

Three people with covered faces broke into the church after smashing the external security cameras. Caught on the internal cameras, the three thieves walk up to the Panagia Giatrissa Icon, apparently to take the votive offerings (usually solid silver) left by the icon by grateful pilgrims. Upon approaching the icon, the thieves seem to hesitate, the leader of the gang appears to cross himself before the icon, and then all three leave without taking a thing. In the stories of icons and the Saints, we sometimes read of “miraculous forces” stopping would be assailants from committing a sinful act; in the life of St Mary of Egypt, a mysterious force prevents her from entering a church, whereupon she is led to pray before an icon of the Mother of God fixed to the doorway. In the grainy images shown in the news report linked below, we see what such a miraculous force might look like from the outside. We do not know what went through the hearts and minds of the would-be thieves, who remain at large, but it looks like they were “put to confusion” at approaching the icon at the very least!

Fragrant nectar of the Theotokos, precious Throne of the King of All,
You pour forth fragrance O Virgin to Your servants, for You held God in your womb,
Fill us with all divine grace, therefore now,
We all ever preach and glorify You as the true Mother of God.
(Apolytikion of Panagia Giatrissa)

News Report of the incident (in Greek) - including the CCTV footage of the thieves being turned away from the icon and fleeing the church.

Miracle of Holy Theotokos in the Christian town of Saidnaya
The Miraculous incident took place last month when a rebel group fired rockets at one of the monasteries.
Comments

Eleni9/10/2019 3:44 pm
God is Wonderius in His Saints+ Most holy mother of God- the THEOTOKOS prays for all of MANKIND- for She indeed gave birth to God in the flesh- Blessed art the among women- LOGOS OF GOD+ ICXC NIKA
×