The Problem of Goodness 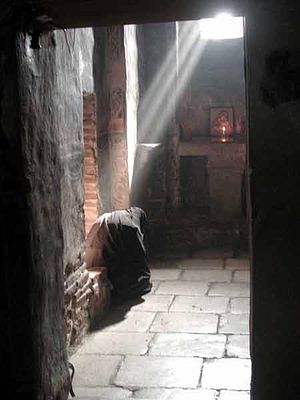 Though many struggle with the so-called “Problem of Evil,” the greater moral problem is that of goodness. How do we account for goodness in the world – particularly self-sacrificing heroic goodness?

It is not uncommon for a person in a dangerous situation to place their own life at risk in order to save the life of another. It is by no means universal (some act first to save themselves or are paralyzed by fear) but it is not at all uncommon. People also frequently act in a manner that ignores their own self-interest and values the well-being and interest of others. And these situations are often done in a manner that simply baffles all moral consideration.

Morality is the practice of following the rules. For Christians, those rules are the commandments of God. But even atheists will have some sense of what they consider to be right and wrong and will struggle to act accordingly. Families and cultures strive to inculcate morality in the young – helping them discern between right and wrong and helping them learn to choose the right. I have written (with some noted protests from others) that I think there is very little moral progress in human lives – that our internalized sense of right and wrong and our relationship with acting morally – is largely formed very early in life and undergoes very little change. A corollary of this assertion is that salvation (theosis), being united with God and conformed to the image of Christ, is not something that comes at the end of or as a result of moral progression.

I do not mean to imply that moral teaching is useless or even that it should be neglected. The formation of the young is a precious responsibility that should never be neglected. I do not think, however, that our moral suasion will be of much benefit to adults. I think they will be just about as good or bad as their character will allow and will likely feel guilt or shame as a result of moral failings, but character is by far the most reliable means of predicting and understanding behavior.

Character is something of a habit – or a set of habits. In the normal course of a human life it is shaped by many, many things both in the realm of nature and nurture. Many of the most important elements in a human life are set at a very early age. Character is also shaped by any number of unintended things – abuse, neglect, violence, shame, etc. Everyone you meet is broken in some manner and will likely discover patterns of brokenness that baffle their moral intentions. More moral instruction will not correct something whose deficiency was not caused by a lack of instruction.

Some of the best thought on the topic of character sets its formation within the realm ofpractices. Stanley Hauerwas has written that character is formed in much the same way a young apprentice learns to lay brick. We learn such skills by working with someone else who has those skills (a master brickmason). Probably the single greatest moral failing of the modern culture is the absence of apprenticeship. We foolishly take young people at the age of apprenticeship (today called “adolescence”) and place them in a social setting surrounded by others needing apprenticeship. Adolescents are not able to teach one another the skills that form and shape character. As a result, most adults are simply emotionally and morally immature, poorly shaped survivors of a broken culture that has forgotten how to make them into adults. Upon entering public school, children are launched into a “free-market” moral world in which character will be shaped by children. Why is “bullying” considered an epidemic today? Because our children are growing up on an island in the Lord of the Flies. Bullying is simply moderately successful behavior in the free market of adolescence. As a culture, we are insane.

All of that describes and even predicts our behavior to a great extent. We are about as good as our character will allow, only a little less so. So where does the character of goodness, of heroic goodness come from?

You can search in vain for the practices that produce heroic goodness. Despite the fantasy of Jedi Knights and the like, there are no schools for heroes. At best, we have video games by which we train the next generation of drone soldiers. But heroic goodness exists.

Earlier I mentioned the extreme cases that occur in the midst of physical danger. One stranger carries another down 12 flights of stairs during the collapse of the World Trade Center (there are many such cases). But there are also other far more mundane examples. A simple act of kindness, in the right circumstances, easily rises to the level of heroic goodness – particularly when it comes at personal cost. And these occur all the time. And those that I have in mind are not the product of virtue dictated by character. I have seen self-sacrificing goodness in the life of drug addicts, prostitutes and felons. Were such goodness able to be produced by any method known to man – then the book should be written and read by all.

Instead, we have serendipitous goodness – unlooked for, unpredictable, inexplicable. I would even go so far as to suggest that such goodness alone accounts for the survival of our species. For were our moral character alone required to carry the burden of civilization, we would have perished long ago.

There is a word for such goodness – it is grace. The Orthodox speak of grace not as God’s favor, but as God’s own Life. It is His Divine Energies. And the goodness that I am describing has all of the hallmarks of such Divinity. It cannot be described as the product of human study or effort. It is something at which we can only marvel. It rightly moves us to tears and draws joy from the depths of our hearts. For it is the gratuitous gift of God erupting in our midst. And its presence in the world is a sign of the Kingdom.

Such goodness should give us pause to wonder. What role does it play in the life of salvation? If we are truly saved by grace, how are we to understand the role of such goodness in the moral struggle?

It is the position of this unaccountable goodness and its relationship to moral character that points to the “unmoral” nature of salvation that I have described in earlier articles. This goodness lies hidden, unknown, unpredictable, unable to be inculcated, taught or produced by human effort. It is not the product of a moral scheme nor even of character formation. Having said that, I do not think it is merely accidental nor without a cause. It is grace.

In the gospels we have recorded the account of the “good thief.” We can presume, based on the gospel itself, that he was a thief, legitimately tried, convicted and executed. He is not a keeper of the commandments. But in the moment of his extremity, he rises to defend an innocent man. At the same time, he acknowledges his own crime and accepts the justice of his own punishment. It is a clarifying moment, though in no way predictable. Turning to the man being crucified to his left, he says, “Remember me when you come into your kingdom,” and with that finds paradise. It is grace.

There is the story of another man convicted of a crime, treason in his case. On December 22, 1849, as part of a group of 20, he was led to a place of execution. Several were stripped and tied to poles where they faced a firing squad. At the last moment, word came from the Tsar that their sentences were to be changed. This man, Fyodor Dostoevsky, experienced a rebirth, though the commuted sentence included 8 years of prison and punishment.

Later that day he wrote his brother: “I did not whimper, complain and lose courage. Life, life is everywhere, life is inside us… There will be people beside me, and to be a man among people is to remain a man forever… that is life, that is the task of life…” It was a moment of grace that created one of the most unique voices of the 19th century.

We are being saved by grace. The entrance of Christ into the world did not come in answer to a human project nor as a result of human struggle and effort. It was gratuitous. When it came it was not in any way according to expectation. The grace of God as incarnate flesh was simply not the long-expected Messiah. He was the Christ no one expected.

The grace of salvation is much the same – perhaps exactly the same. What it requires of us is thanksgiving. The eucharistic life that is given us in Christ is one of gratuitous grace and grateful response. For the Divine Life that is the end of salvation is not a crowning achievement of our disciplined efforts. It is the transformed heart of the grateful child. It is only such gratitude that forgives enemies (no moral calculus ever makes this possible). It is only such gratitude that sells everything and gives it to the poor (moral justice would reject it).

And while morality continues its mediocre course of success and failure – goodness, unbidden and unexpected, continues to manifest itself, teasing us towards the feast of thanksgiving at the Messiah’s last banquet. At that table there will be only grateful hearts at the gratuitous meal. The moral will have excused themselves in order to marry wives and buy cows. Thoughts on the Nature of Evil
Fr. James Thornton
How is it possible that evil exists in a world created by God? For evil is precisely that which opposes itself to and resists God, perverting His designs and repudiating His ordinances. How then can evil exist if all that exists depends upon God for its existence? "Goodness is Tested by its Encounter with Evil"
Metropolitan Anthony of Sourozh
I am convinced that God concerns Himself with the fate of mankind. Second, I think that if there is freedom in man that was given by God, God no longer has the right to stand in the way of this freedom and destroy it. Otherwise it would look like this: God makes you free, but the moment you use that freedom in a way that He doesn’t like He flattens you and you are no more.
Comments

David A. Bloomquist5/30/2017 6:29 pm
I was shocked to learn that Fyodor Dostoevsky was so close to be executed! I tried reading some of his works using a 5 x 8 notecard to keep track of the Russian names. I usually never finished any of his works because my mind couldn't keep track of the Russian names even by writing them down on a notecard. I would like to see someone re-write his novels using common English names, and of course qualifying this in the introduction. I am not completely stupid, I am a clinical psychologist. Does anyone else have a problem with the Russian names?
×