Source: Diocese of the West

Blessed are those who are persecuted for righteousness’ sake, for theirs is the kingdom of heaven. 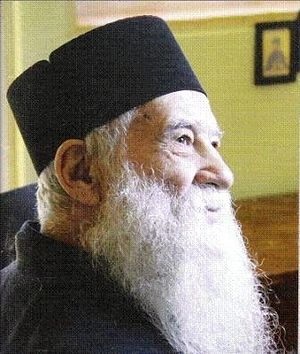 I had no idea. To be more precise, before I converted to Eastern Orthodoxy, I knew that the Orthodox Church had been harshly suppressed by the communists, but I had no idea that the cruelty of persecution often equaled that inflicted on the early church.

Father George Calciu (1925-2006) was one such sufferer for Christ. A Romanian by birth, an Orthodox Christian by upbringing, twice a political prisoner (totaling 21 years), a priest by vocation, an outspoken evangelist and critic of communist materialism, brutally tortured for the faith, blessed to experience the “Uncreated Light” of God, and finally when all seemed lost, liberated and exiled to America where he became a beloved priest and a spiritual father—including to the prolific author and Orthodox apologist, Frederica Matthewes-Green.

The book is primarily a first person biography taken from several interviews with Fr. George. But it also contains many of his sermons, most notably the famous, “Seven Homilies to the Youth,” a series of Lenten evangelical and anti communist sermons Fr. George presented in defiance of the Romanian tyranny in 1978.

George Calciu was the youngest of eleven children, raised by devout parents as a faithful Orthodox Christian. Romania became communist in 1944, and the government soon began to crack down on the Church. Calciu was a medical student at the time, and his open faith made him suspect. He was imprisoned in 1948, where he was subjected to1984-style mind control experiments—tortured until he denied Christ, and then forced to torture others toward the same end. “They wanted our souls,” he recalled, “not our bodies.”

Anguished over his “weakness,” Calciu vowed to become a priest if he survived. Released in 1964, he married, had a son, and obtained a doctorate in French. But the call remained, and when he took an ostensible French professorship at a theological seminary, he was actually secretly studying for the priesthood. He was ordained in 1973.

Fr. George and his family lived quietly until the communist government renewed its assault on faith. Heeding what he considered a divine call to speak out sacrificially, he offered seven homilies aimed at the young, one homily building on the next during each Wednesday of Lent. It was a rare moment of courage for 1978 Romania: When the church was closed to him by his terrified Patriarch, he preached from its steps. When the gates were locked, the growing audience of youth defiantly climbed the fence to hear him.

In “The Call,” Fr. George began by urging the youth to hear “the voice of Jesus!” issuing a boldly subversive (to communism) call to faith:

What do you know of Christ, young man? If all you know is what they have taught you in atheism classes, you have been deprived, in bad faith, of a truth—the only truth which can set you free…Who prohibited you from knowing that there exists a better way…than that on which you now wander blindly?...Who has pulled the veil over your eyes so that you would not see the most wonderful light of love proclaimed and lived by Jesus until the final end?

The answer was obvious: The government, the communists, and the educators they controlled. Fr. George offered a clarion invitation:

Come to the Church of Christ—to learn what innocence and purity are, what meekness is and what love is. You will find your place in life and the purpose of your existence. To your astonishment, you will discover that our life does not end in death, but in resurrection; that our existence centers on Christ, and that this world is not a mere empty moment in which nonbeing prevails…Jesus is seeking you; Jesus has found you!

Week after week, Fr. George’s passionate homilies methodically built its evangelical message. In the second, he urged, “Let us Build Churches!” In the third, he described “Heaven and Earth”, the fourth, “Faith and Friendship.” In the fifth, perhaps knowing what was coming, Fr. George described the “Priesthood and Suffering:”

In the sixth homily, he presented the theology of “Death and Resurrection,” and then, just before Pascha (Easter), he concluded on a loving note, assuring his audience of God’s “Forgiveness.” He closed his last sermon with an excerpt from St. John Chrysostom’s famous Paschal homily read each Easter in every Orthodox Chruch in the world: http://en.wikipedia.org/wiki/Paschal_Homily

Lent over, Fr. George knew what to expect, and it came. Ceasescu ordered him disappeared.

Fr. George’s faith was more mature and well formed than during his first imprisonment, and this time, despite beatings, torture, and deprivation, he did not break. At one point, he was so exhausted from unremitting interrogation that he could not even recall the Lord’s Prayer. “Then I remembered that there is a prayer to Jesus Christ: ‘Lord Jesus Christ, Son of God, have mercy on me.’… I was no longer scared…and I was able to resist.”

He spent years in solitary. He knew nothing of his family, and they, nothing of him. One night, Fr. George heard the joyful peal of many church bells: It was Easter. Early the next morning, the worst guard in the prison—who delighted in torture—entered the priest’s cell. He should have turned his face to the wall. Instead, Fr. George looked his tormenter boldly in the eye and proclaimed, “Christ is risen!” Rather than delivering a blow, the guard paused, and blurted out, “In Truth He is Risen!” and nervously backed out of the cell.

That was when Fr. George experienced a vision of what Orthodox theology calls the Uncreated Light:
http://orthodoxwayoflife.blogspot.com/2010/02/truth-of-uncreated-light-of-god.html

He shut the door and I was petrified, because of what he had said. And little by little, I saw myself full of Light. The board against the wall was shining like the sun; everything in my cell was full of light. I cannot explain in words the happiness that invaded me then. I can explain nothing. It simply happened. I have no merit.

Fr. George was put in a cell with two criminals who said they had been ordered to murder him. Instead, he converted them to Christ. Rather than find others to do the deed, the government recanted. Fr. George had become a cause célèbre in the West, and his safety was required in return for economic concessions. He was released to house arrest in 1984 and exiled to America the next year where he spent the rest of his life in freedom.

Fr. George’s passion teaches us that persecution and martyrdom—as hard as they are—still redound to increased faith and ultimate victory. It is also worth nothing that Fr. George lived what he preached. He did not hate his persecutors. Rather, he prayed for them daily and trusted in God’s mercy for their salvation. He also found joy. Matthewes-Green writes of her spiritual father in the introduction, “He had a beaming smile. He was often amused by life, and ready to laugh… Fr. George was joyful…He was naturally affectionate, and would hold my hand or anyone’s…just beaming with a radiant smile.”

Fr. George Calciu lived the kind of life many Christians pray to receive—but to which most hope never to be actually called. As we Orthodox say when remembering the righteous departed: Fr. George of blessed memory, pray for us sinners.

Wesley J. Smith is a senior fellow at the Discovery Institute’s Center on Human Exceptionalism. His blog Secondhand Smoke is hosted by First Things. If I am the church of the Holy Spirit
Hieroschemamonk Julian (Lazar), George Kryshnyan

If I am the church of the Holy Spirit
Hieroschemamonk Julian (Lazar), George Kryshnyan
He has a pure heart, which reflects the heavens like a mirror, thanks to the goodness of his heart. When he is joyful his entire face begins to radiate. It is a great joy to find oneself nearby him then, because a feeling arises as if you are sitting on your knees by a grandfather with a snow-white beard, looking with love upon the inner child of your soul. Carrying the Cross and Suffering in Hope
Gabe Martini

Carrying the Cross and Suffering in Hope
Gabe Martini
A falsehood spread throughout the broader Christian world today is that God adopts us into his family without anything expected of us. Or even worse, we are promised a better life, happiness, and even material wealth or worldly success. But this is really the opposite of what the scriptures promise.
Comments
×