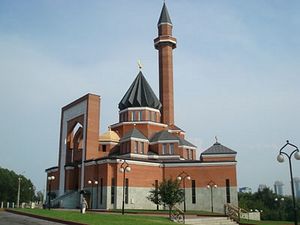 The Russian Orthodox Church expresses its concern over the desecration of a memorial mosque at the Poklonnaya Hill in Moscow, reports Interfax-Religion.

“This crime was obviously committed by people whose behavior is incompatible with both Islam and Christianity, otherwise they would not have used an unskillfully painted cross together with an obscene image near it in their provocative and blasphemous action,” said Archpriest Vsevolod Chaplin, head of the Synodal Department for Church-Society Relations, to Interfax-Religion.

He has supposed that somebody, probably very young people, “got carried away by the hysteria around Islam and Islamic symbols that is now going on in the world”.

“Campaigns directed against religious symbols always attract mentally unsound and foolish people. And I do not want the world agenda to be determined by terrorists taking refuge in Islam on the one part and by anti-religious instigators and blasphemers on the other part,” the agency’s spokesman noted.

According to him, “such an agenda very soon may lead to a war of all against all”.

“Apparently someone is striving for this, stimulating pseudo-Islamic extremists and, at the same time, provocateurs who desecrate religious symbols. It grieves me that the cross of Christ was used in this way, it is monstrous. Thus, it is a desecration of both the mosque and the cross alike,” said the representative of the Church.

He has expressed his hope that “we will learn who committed this crime and will work hard together so that all the attempts to undermine the interfaith and interethnic peace from any side might be excluded from our life”.

Earlier Azamat Mintsayev, vice-chairman of the All-Russian Interethnic Youth Union, published on his social network’s page photographs with drawings painted in black by unidentified people on the walls of the memorial mosque. Among the pictures are those of a cross and of male reproductive organ near it. The Serbian Church calls reprinting of blasphemous cartoons “spiritual violence”
According to Bishop Irinej of Backa, ridiculing historic figures who shaped the unique religious identity of hundreds of millions of our contemporaries goes beyond the scope of freedom of speech, guaranteed by law, and is absolutely inadmissible.
Comments
×