What St. Porphyrios of Kavsokalyva and St. Paisios the Athonite Said About Each Other 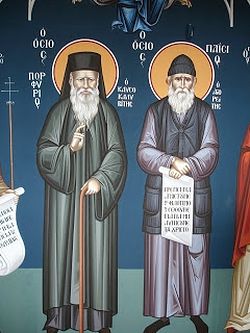 One morning in 1981, when I was a young monk, I went to see Elder Paisios, to ask him if there was another contemporary holy elder through whom Divine Grace was at work... His response was clear:

"There is Elder Porphyrios, who is in a great spiritual state and is a sanctified figure. You should go and visit him, when you can, because he is an old man and may repose."

I asked where I could find him, and he told me that he lives in an hesychasterion in Nea Palatia in Oropos.

My first question was answered, but now I had a second question to have answered:

"I wanted you to tell me about another, if you knew someone else, who is in the same state. No matter where he lives - either here at the Holy Mountain or elsewhere - no matter where he is, I want to visit him."

Elder Paisios, speaking again of Elder Porphyrios, responded: "You should go to him. He is in a very great state!"

It was refreshing to see how Elder Paisios and Elder Porphyrios thought of each other.

A certain monk asked Elder Paisios: "Elder, I want to see you about a certain problem that I discussed with Elder Porphyrios."

Elder Paisios told him: "If you discussed it with Elder Porphyrios, then you don't need to discuss it with me, because he bears the gift of having a color television, while mine is black and white."

The Elder had such a humble mind. Elder Porphyrios would tell us:

"The Grace of Elder Paisios has greater value than mine, because he acquired it after labor and ascetic sweat, while God gave me it completely free, when I was young, for the sole reason to help the brethren." Athonite Elder Porphyrios the Kapsokalivite to be canonized
The feast-day of Venerable Porphyrios will be celebrated on December 2.
Comments

I thank-you for this opportunity to share with you the Love of our LORD, and declare my love and honour given to our beloved saints. May one day come when we are worthy to walk in the hereafter with them. To share the wonderous gifts of a true life in Him, our Lord and Saviour.