Xenophontos Monastery—immersions of the cross and Theophany bathing (+Video)

On January 19, 2015, when the Orthodox Church celebrates the feast of Theophany according to the old calendar, the triple immersion of the holy cross was performed at the Xenophontos St. George’s Monastery on Mt. Athos in front of a great number of pilgrims who had arrived to the abode of the Most Holy Theotokos on the “Saint Anne” morning ship, reports Romfea. 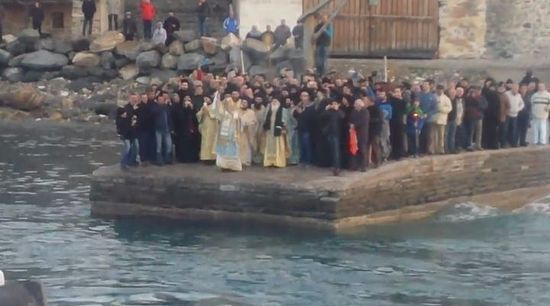 His Eminence Metropolitan Barnabas of Neapolis and Stavroupolis threw the cross into the sea.

The video was made by the pilgrim Angelos Atdriakakis. 2012: Over 110,000 Theophany bathers in Moscow
On the night of January 18–19, the feast of the Theophany, the yearly mass immersion in the blessed waters of Moscow went by without incident.