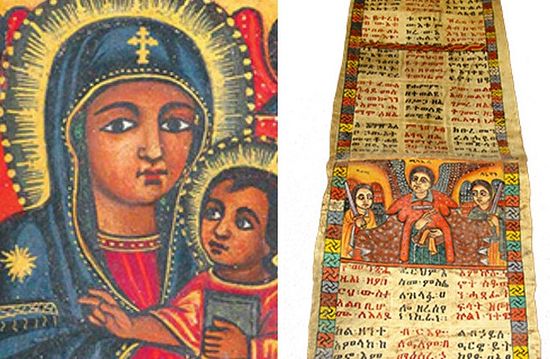 60 Ethiopian church icons and artifacts are currently on display at The Museum of Russian Icons in Clinton, Massachusetts. The paintings, mostly gathered from a European private collection, date back to the 16th century and represent Ethiopia’s ancient Christian tradition. The exhibition, which is on view through April 18th, features “60 small scale icons triptychs, larger icons and illuminated manuscripts. There will also be several cast-brass hand-held processional/benediction crosses with intricate designs for the Museum’s own collection as well as some small pendant/pectoral crosses worn by priest as part of their sacred vestments.”

The announcement adds: “The majority of paintings are religious in nature, often decorating church walls and bibles. From the 16th century, Roman Catholic church art and European art in general began to exert some influence. However, Ethiopian art is highly conservative and retained much of its distinct character until modern times. The production of illuminated manuscripts for use continues up to the present day. Pilgrimages to Jerusalem, where there has long been an Ethiopian clerical presence, also allowed some contact with a wider range of Orthodox art.” Our windows into heaven

Our windows into heaven
Drawing on the rich tradition of Orthodox Christian spirituality and imagery, a collection of over 80 icons - by Greek and Russian masters - will be exhibited at the Art Gallery of Ballarat Ethiopia: In Quest of Divine Promise
In a dark, sooty room lit with a blaze emanating from a handful of traditional ovens, men stir dough and bake in absolute silence. While some keep the fire burning by inserting chopped woods into the oven, others pile the dough on to the clay oven.
Comments
×