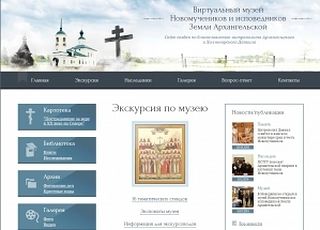 The Arkhangelsk Diocese of the Russian Orthodox Church has opened the “Virtual museum of the New Martyrs and Confessors of the Arkhangelsk land.” The project of the website dedicated to the period of persecution of Christians for their faith in the 1920s-1950s in the north of Russia, won the “Orthodox Initiative 2013-2014” grants competition, reports the Arkhangelsk Diocese’s press service.

The www.arhispovedniki.ru website contains video collections and libraries related to the repressions, archival court cases, card files of those persecuted for their faith, the map of “sorrowful” places, the New Martyrs museum’s exhibits, and the “Ones who endured to the end” exhibition with methodological materials for guides.

“The website, developed by the IT-Nord famous Arkhangelsk company, contains around 100 research works on the repressions, hundreds of photographic materials and photocopies of archival cases, thousands of biographies of martyrs for the faith. People will be able to take virtual tours of the museum of the New Martyrs and Confessors that recently has opened in Novodvinsk. A huge amount of work has been done but much work still lies ahead. The local history specialists from Arkhangelsk have collected a very rich material on the subject and it will gradually published on the website,” related Michael Nasonov, author of the project, head of the Arkhangelsk Diocese’s Information and Publishing Department.

According to him, as part of the project the diocese has concluded an agreement on exchange of information with the “Pudozhenskoye Ust’e” local history organization, the “Nord” cultural-educational society as well as the St. Tikhon’s Orthodox University of Humanities. In the near future the presentation of the “Virtual museum” for the Arkhangelsk media will be held.

The computer and networking equipment was purchased using the grant money for the large museum of the New Martyrs, which will be open under the auspices of the Orthodox school of St. John of Kronstadt in Arkhangelsk. Electronic materials on repressions in the north of Russia were prepared On the 12 terabyte separate protected network storage. Moreover, tablet computers of the “Ones who endured to the end” travelling exhibition as well as the methodological complex for distant training of guides were developed.

In 2011 the Arkhangelsk Diocese won a grant of “The Orthodox Initiative” in the sphere of “information activities”. The funds received were used for creation of “the Orthodox Internet Television of Pomorye (the historical name of the Russian North)”.

“The Orthodox Initiative” international open grants competition has been held since 2005. The competition’s initiator and organizer is the St. Seraphim of Sarov Charitable Foundation. Since 2010 the competition has been held by the Coordinating committee for promotion of social, educational, information, cultural and other initiatives under the aegis of the Russian Orthodox Church. The Coordinating committee is headed by His Holiness Patriarch Kirill of Moscow and All Russia. Since 2013 the Sorabotnichestvo (Collaboration) Foundation has been in charge of the competition’s organization.

The competition’s primary aim is support of the civil initiative in the society, encouragement of creative people to be engaged in creative and constructive activities for the good of the neighbors as well as for preservation and promotion of cultural and moral traditions. This support is carried out on the basis of the large-scaled and many-sided cooperation of the Church, society, business structures and state. The total financing amount for the years of holding of the competition is 330.4 million rubles. Sanctity in the Execution Ditches
Lado Gegechkori, Igumen Valerian (Golovenko)
In the winter of 1937, the sound of gunfire could be heard throughout the territory of the Soviet Union… The clergy, who accepted their priestly rank along with a crown of martyrdom, lay in the ditches of common graves, and died from sickness and hunger behind camp gates and in prison walls. What motivated them to take that step?
Comments
×