On Actuality and Reality (for the commemoration of St. Anthony the Great) 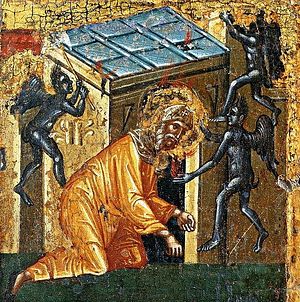 We know comparatively much about the life of St. Anthony the Great thanks to St. Athanasius the Great, his admirer and contemporary. Incidentally, His famous work, “The Life of our father Anthony, described in an epistle to monks living in foreign lands” might seem a little hard to understand for modern readers. It’s not a matter of theological terminology or philosophical channels of thought. There isn’t so much of this in the Life of St. Anthony. We are talking about something else. Modern man can have a certain amount of skepticism and doubt over the story about when he is attacked by demons who came to his cell at night and beat him half to death. The next time he meets them they turn into wild animals, filling the tomb where the ascetic is dwelling and threatening him. In the story we also meet fantastical giants who are really demons, and monsters that come to frighten the saint. There are many other stories recounted in the Life of St. Anthony the Great that modern Christians have not heard about in recent times.

In this respect, the stories in the lives of the ancient desert dwellers seem so distant and nonsensical in our modern reality that a question might arise: Just how needed and beneficial are these Lives for people in our times?

The answer to this question can be found in the life of St. Anthony. The saint talks about the demons’ cunning: “They are crafty, ready to turn into anything, and take on all different appearances. Because they are invisible they are often imagined singing Psalms, or reminding us of sayings from the Scriptures. Sometimes when we are occupied with reading, they quickly, like an echo, repeat the same thing we are reading. If we are sleeping they urge us to stand for prayer, and they do this so often that they don’t allow us to fall asleep. Sometimes they will appear as monks, and seem to be reverent interlocutors, in order to deceive by their appearance and draw those they have deceived into whatever they desire.”

In this way a question is posed in the Life concerning the relationship between actuality and spiritual reality. Actuality is traitorous and deceptive. Nevertheless, the devil constantly tries to convince the person to trust his own senses, suppositions, and conclusions that he makes from the pictures he sees or the tales he is told. “The demons do everything, talk, make noise, pretend, stir up rebellions and confusion to trick the inexperienced; they knock, laugh madly, and whistle,” St. Anthony warned, “and if someone does not pay any attention to them they cry and shed tears as ones vanquished.” Of course, it is not just a matter of concrete facts. Through the example of his own sufferings the saint reveals the evil powers’ methods for warring against a Christian. With time it changes its form, but it essentially remains the same. The demons’ whistles, noise, and mad laughter are present even today in our lives; their goal is the same—to frighten, throw a person off the right course, cast him into a depression, and set people against each other. The one who is faithful to Christ should with constant vigilance recognize these devilish snares in the pictures, information, and opinions that rile our hearts and bring despair, envy, craftiness, and hatred into our lives.

In the Life of St. Anthony, as in all the other lives of the ancient fathers, the Christian meets with concrete and detailed questions addressed to his soul. This is a question of the reality in which a servant of Christ should live. It does not resemble the reality that they are constantly trying to get us to believe as true. In that reality the meaning of man’s life does not consist in the very fact of his presence on the planet. In actual reality man should live for the sake of a Truth that is higher than him. This is in fact the meaning of spiritual warfare: man is continually trying to push through the screen of actuality into true reality. On this path we have to overcome much noise, whistling, and mad laughter. Overcoming means not trusting them, not accepting slander and judgment as pure and indisputable truth, even if there is some basis in fact. After all, you can always find a pretext. It is easy to judge, easy to give in to anger, to let hatred enter your heart. Nevertheless, there is no justification for sin, it can only kill and corrupt. That is why righteous John of Kronstadt said of reality, “No matter what I hear about other people, there is only one thing that is true: I should love my neighbor.”

The path to reality is not simple. Perhaps at a particular moment we, like St. Anthony, will find ourselves so tormented, downtrodden, and exhausted that, like the saint, we will finally turn to Christ in despair and say, “Where were You? Why didn’t you appear at the beginning and stop my torment?”

But the Lord never betrays us. With meek love He answered the saint, “I was here, Anthony, but I was waiting, because I wanted to see your struggle. And because you were steadfast and not vanquished, I will always be your helper and will make you known everywhere.”

Finally, in all trials, on the difficult path of overcoming fickle realities, a Christian should remember the inspiring words of St. Anthony the Great: “One must fear only God and have contempt for the demons, not fearing them in the least. The more fear they produce the more effort we will put into laboring ascetically against them. For a righteous life and faith in God are powerful weapons.”

The complete Life of St. Anthony the Great can be found here. Vrubel: The terrible price of obsession with demons
Mikhail Vrubel (1856-1910), the author of such masterpieces as “Demon and Swan Princess,” is probably one of the most tragic figures among famous Russian painters. The Foolish Audacity of the Demons
Priest Dimitry Shishkin.

The Foolish Audacity of the Demons
Priest Dimitry Shishkin
We can’t say that our path is ideal; there has been much that is bitter and hard, and many mistakes were made. But there is nothing in this world that is ideal. The main thing about this path is that it is a search not only for the earthly, but for the heavenly. This is a very serious and important point. And it must be allowed that we are capable of making a deep analysis of our mistakes in order to avoid repeating them in the future.
Comments
×