“And David dwelt in the stronghold, and called it the city of David.
And David built round about from Millo and inward.” (2 Samuel 5:9) 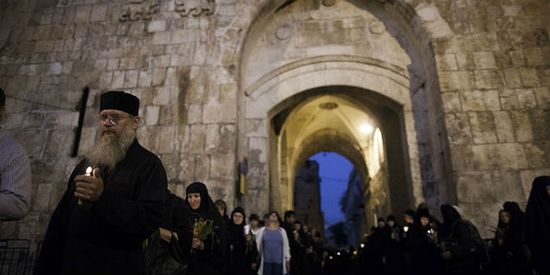 Christian Orthodox nuns hold candles and flowers as they walk along the Via Dolorosa in the old city of Jerusalem. (Photo: Yonatan Snidel/ Flash90)

Archaeologists have announced they may have uncovered the precise location of Jesus’s trial, and it’s not along the traditional Via Dolorosa path, Haaretz reported.

The site, discovered nearly 15 years ago under a police station near the Tower of David which was excavated for use as an archaeological museum for children, matches descriptions from the Gospel of John. The site has been closed since.

Jesus’s trial is said to have been held at the Praetorium, but the application of the term, which signifies the place where important military decisions are made, shifted over time from meaning the tent of the general to the station of high-ranking officials.

Today, the Via Dolorosa begins at the Antonia Fortress on the opposite end of the city. However, scholars have longed questioned this identification.

The Reverend David Pileggi, minister of Christ Church located nearby the museum, told British paper The Daily Mail that the discovery of a spot between a gate and an uneven stone pavement, as described in the Gospel, confirms “what everyone expected all along, that the trial took place near the Tower of David.”

Shimon Gibson, an archaeology professor at the University of North Carolina at Charlotte, told the paper, “There is, of course, no inscription stating it happened here, but everything – archaeological, historical and gospel accounts – all falls into place and makes sense.”

Other fascinating discoveries have been made at the site. In modern terms, the police station was established in the 1830s, but it was used for similar purposes in just about every previous era. The archaeological record at the site stretches back to First Temple times. Haaretz indicated, “Crusaders, Muslims, Byzantines, Romans, Hasmoneans, kings of Judea and Herod himself all left behind vestiges of walls or fortresses beneath the floor.”

A Crusader-era pool showed evidence it was used in dyeing animal skins, supporting historical claims by 12th-century traveller Benjamin of Tudela that the Jews who lived there dyed skins.

A Herodian-era sewage system beneath the pool replaced a Hasmonean-era wall, which itself was built on the ruins of a Biblical-era wall. The plaster from the Biblical wall is similar to that found in Hezekiah’s Tunnel in the City of David, and both date to the same era.

“There are two explanations why Herod’s builders destroyed the Hasmonean wall,” Re’em, now the authority’s Jerusalem District archaeologist, told Haaretz. “The first is that it was an engineering necessity due to the change in the walls’ angles. The second is a political explanation — that Herod wanted to destroy the walls to symbolize that he was the Hasmoneans’ successor.”

This site is unique, Re’em says. “This is one of the only places where you can see the archaeological continuum, the entire history of Jerusalem, from the British Mandate back to the First Temple period. Here you understand what the Old City is, the archaeological density of the place.”

The site is being incorporated into tours by the Tower of David Museum, which is briefing guides on its significance. Currently, tours are only available to groups, not individuals.

Interesting as the discovery may be, it is not likely to change a tradition that dates back to the Middle Ages.

“What makes a place holy is the fact that people have gone there for hundreds of years, prayed, cried and even celebrated there, so I don’t think there will be changes to the route anytime soon,” Pileggi told The Daily Mail.