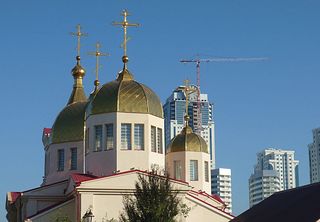 Ethnic Russians are leaving the North Caucasus, and the prospects for restoring ethnic-Russian communities in the republics are dim despite the authorities’ efforts. Hundreds of thousands of ethnic Russians fled Chechnya following years of war and instability. Economic and political upheavals forced most ethnic Russians out of northern Dagestan, where a large Russian community existed. The Russian Orthodox Church has now stepped up efforts to build churches in both republics to provide anchors for the Russian population to stay, but the benefits of the program are questionable. According to the Russian Orthodox Church, 6 million Muslims in the North Caucasus have about 6,000 mosques and 3 million ethnic Russians have an estimated 600 churches. The construction of churches in the North Caucasus is under way to alleviate the perceived imbalance (Kavpolit.com, January 24).

The leaders of the North Caucasus republics have said repeatedly that they favor the return of ethnic Russians. However, lower level authorities are often less receptive to integrationist ideas. For example, the municipal authorities in Chechnya’s Shelkovskoy district have reportedly refused to provide the land plot for a Russian Orthodox Church to be built in the central part of the administrative capital of the district, Shelkovskaya village. The Cossack leader in Shelkovskoy district, Alexander Gritsakov, complained in an interview with the Kavpolit.com website that the Cossacks in the district cannot build churches as they like. “The head of the Naursky district is [an ethnic] Russian, the head of the police is also a Russian, but in our [district] all Russians have been fired from the leadership positions,” he said. Asked by the journalist why the Cossacks do not erect a wooden church in Shelkovskaya, Gritsakov said that it would be burned down (Kavpolit.com, January 24).

The former leader of the Cossacks in the district, Yuri Laskov, on the contrary, said that life in Shelkovskaya is far better than in the neighboring Stavropol region, because Chechnya, in his words, is much less bureaucratized. The absence of churches is not a problem because they are not needed. “In the village of Kagarlinskaya only 16 Russians are left,” he said. “Who will build the church? Or in the village of Dubovskaya? Only a handful of Russians are left, about 1,900 people in the district [the official 2002 census data put the number of Russians at almost 4,000 people in the district]. Some villages do not have even one left.” According to Laskov, all the Russians who did not sell their houses have returned to Chechnya and others have nowhere to return. Those who return have few job opportunities available to them. “Most Chechens get by, engaging in trade, but Russians do not engage in this kind of activity much,” the Cossack ex-leader said. The problem of retaining an ethnic-Russian population is quite serious even in Dagestan, which did not experience two full-scale wars with Russia as did Chechnya. A spokesman for the Russian Orthodox Church in Dagestan said: “We have a range of churches that do not have their own priest. By no means everyone is willing to go to Dagestan and Chechnya” (kavpolit.com, January 24).

While Ramzan Kadyrov regularly makes statements about how he is defending Russia in Chechnya and elsewhere, ethnic Russians do not seem to be flocking back to the republic even as the Russian Orthodox Church attempts to mark ethnic-Russian sites with churches. Whether the Chechen authorities are consciously preventing ethnic Russians from claiming their homes or the economic situation makes it impossible for them to survive in the republic, the result is the same. Ethnic Russians are choosing to leave the North Caucasus republics, especially Chechnya, Dagestan and Ingushetia, for good. The Russian Orthodox Church’s attempt to create a certain social support system for ethnic Russians in the region does not seem to be changing the situation.

At the same time, the contrast between the Russian authorities’ obsession with the physical presence of ethnic Russians in the North Caucasus and its lack of interest in the North Caucasian presence in any region is quite glaring. Even though all citizens and ethnic groups in Russia are formally equal, the largest and the most powerful ethnic group receives preferential treatment from the government in Moscow. By heralding ethnic Russians as the backbone of the state and thereby belittling the role of other ethnic groups, Moscow is creating more problems than it is solving. In response, the ethnic identities of North Caucasians are also becoming salient, and even though they cannot challenge the rise of the Russian nationalism openly, they are certain to put up passive resistance. Russian Church opens the first monastery in Ingushetia
The Holy Synod of the Russian Church at its session on Wednesday approved of Bishop of Makhachkala and Grozny Varlaam’s initiative to open the New Sinai Monastery in the Stanitsa of Ordzhonikidzevskaya (Sleptsovskaya) in Ingushetia.
Comments
×