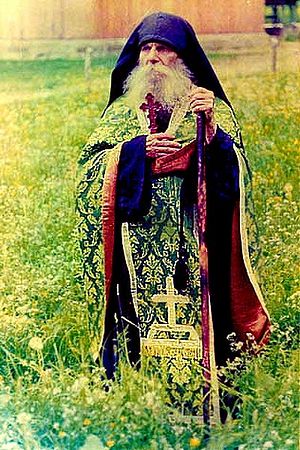 —“What is humility, Father Paisius?” some of his disciples once asked him.

Humility is the thought and conviction of our heart that we are more sinful than all men and unworthy of the mercy of God. Reviling ourselves doesn’t mean that we have true humility. True humility is when someone shames and abuses us publicly, and we endure it and say, “God ordered that brother to shame me for my many sins.” We should receive everything as a command of God. When someone shames you, say that God commanded him to do it. When someone takes something of yours, God commanded him to take it, in order to make you a monk. When you are removed from a higher place, God changed your place so that you would change from your passions and bad habits. This is true humility. And pride is when we trust in ourselves, in our mind, our strength, when we think we are more capable than someone else, better, more beautiful, more virtuous, more pleasing to God. Then it is certain that we are overcome by the ugly sin of pride, from which may God, who humbled Himself for our salvation, preserve us. Let us humble ourselves, brethren, because a proud man cannot be saved. Let us weep for our sins here, so we can rejoice forever in the next life, for after we leave this world everyone will forget us. Let us not hope in men, but only in God. A man changes. Today he gives to you and tomorrow he asks from you. Today he praises you and tomorrow he condemns you. Let us place our hope in the mercy of God, and we will never go astray.

—A layman asked the Elder for a profitable word, and he told him:

Brother, often animals are wiser than men. Let us learn obedience and patience from the ox, humility and meekness from the lamb, cleanliness and industry from the ants and bees. We can learn a lesson for our life from all the animals.
The Elder also added: “It’s best for a man to become a clay vessel, which is useful to all people and for all kinds of daily work, for food, water, and so on. But golden vessels are put in safes and locked up in cupboards. For fear of thieves they are seldom used, maybe only once a year. A clay vessel has its daily use and service to man. So also is a humble man who does not seek honors and rank. He remains insignificant even amid men of lower rank, but he benefits, counsels, and helps everyone, and all seek him out and rejoice with him. Humility is a great gift to monks and all Christians!”

—A certain woman who did not want to have many children went to the Elder and asked his advice about what she should do. He said to her:

If you avoid having children, you avoid salvation. One child is not enough, because you might lose it. Many children in a home are usually healthier than one or two, because they often become spoiled and sickly. Here is fulfilled the word of the Lord: He which soweth sparingly shall reap also sparingly; and he which soweth bountifully shall reap also bountifully (II Cor. 9:6).
A little while ago an old woman came to me for confession, and I asked her: “Sister, how many children do you have?” “Father, I’ve borne eighteen! God took eight of them when they were little, and the other ten are the first citizens in the village!” Another woman came from far away, and I asked her: “How many children do you have, my Christian?” “None, Father.” “And how many abortions have you had up to now?” “Father, I’ve had forty.” “Go and confess to the bishop, my child, and repent while you still have time, because God’s judgment is terrible!” After denial of the faith, the greatest sin in the world is the murder of babies by abortion. These two sins quickly bring God’s wrath and punishment upon men.

—What penance do you give those who have had abortions?

The punishment for abortion and murder in general is life-long repentance. The penance consists of daily prostrations, fasting until evening every Wednesday and Friday, complete avoidance of this sin in the future, and the birth and baptism of other children in place of those killed. Also in such circumstances they are forbidden to receive Communion for seven years, except in the case of a pregnant woman, who can receive Communion as a special allowance.

—Certain Christians asked the Elder, ‘’What will happen to the souls of infants killed by abortion?’’ and he answered with a sigh:

I believe that these infants are martyrs. They will complete the number of the martyrs in the last times, as the Apocalypse says. In dying through abortion they receive the baptism of blood, but the Church does not commemorate them in her prayers in order not to encourage abortions, which for the parents is an act of infanticide.

—A sorrowful Christian asked the Elder for a word of comfort, and he said:

Listen, Brother. Without temptations and griefs we cannot be saved. But we should not be disturbed or grow weak in faith, because now the devil attacks men more cruelly than in the past, for he knows that he has only a little more time to rule over the modern world. Let us pray, endure, and remember the words of the Lord, who said that He will be with us until the end of the ages. We should not despair in the time of our trials, because God has not abandoned us. As in the time of the Prophet Elias the Tishbite, when God still had 7000 of His elect who had not bent the knee to Baal, so also today the Lord still has many elect Christians with strong faith who have not bent their souls to the service of the passions. God has His just ones, in the villages and the cities, who glorify Him day and night and live in virginity and temperance, showing mercy to the poor and widows. But God alone knows their names.

—How can we reconcile those who are quarreling?

First we should pray for them. Then we should urge them to confess to their spiritual father, and we should counsel them with the words of the Gospel to make peace, according to the Lord’s saying: Blessed are the peacemakers, for they will be called sons of God (Matt. 5:9). As much as we can, we should strive to make peace, for we are sons of God and bear in ourselves the peace of the Holy Spirit. Those who are not at peace cannot have Communion. If one of them dies unreconciled to his enemy, then the living one must go to his grave for forty days and beg him to forgive him. Of course this is rather difficult. But we urge the living to make a prostration to the dead with whom they quarreled in life, and we hope in the mercy of God, that He will forgive them.