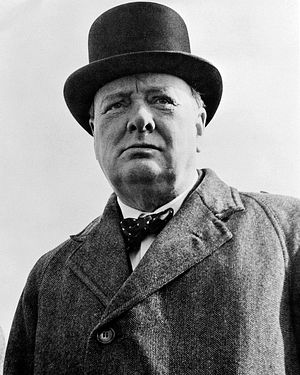 Winston Churchill
I remember a conversation in 1976 about the English character with the late Nicholas Zernov, a prominent representative of the Paris School of disincarnate Russians. He recalled that the reputation of the English among Russians of his generation was that of ‘hypocrites who will stab you in the back’. My protest to him that, although this was a perfect description of the Establishment Anglicanism of the ruling class with whom he mixed, it was not a description of the English and certainly not of the down to earth English among whom I had been brought up, elicited from him complete astonishment; after nearly fifty years of naïve and disincarnate life in the country he had never realized that most English people were not and never have been Establishment Anglicans.

An example of such Establishment hypocrisy is the recent celebration of the fiftieth anniversary of Churchill’s death. Billed as ‘the greatest Englishman’ by a certain tabloid (ignoring the fact that he was half-American), can we really think anything of the sort about him? Of course there are a great many people in this country, now in their 80s and 90s, who agree with the title bestowed on him by that tabloid. But then I have met similar elderly Italians who call Mussolini a genius and elderly Russians who say the same of Stalin (‘there was order and no crime in those days’). I have even met elderly Vichy French, as well as Germans and Austrians, who have a very high opinion of Hitler. Perhaps they are all victims of brainwashing propaganda and nostalgia for a vanished past and youth.

Whatever our balanced conclusions about Churchill, we do have to consider some facts:

Churchill took part in Kitchener’s massacre (‘battle’) at Omdurman in the Sudan in 1898 (at least 27,000 Sudanese cruelly slaughtered by ‘modern’ military technology, including Maxim guns) and even more afterwards in the plundering of Khartoum, with many being burned to death.

Churchill supported the genocide of 28,000 Afrikaaner women and children in British concentration camps in the Boer War between 1899 and 1902.

Churchill’s utterly misconceived and mishandled Gallipoli campaign in 1915 led to the deaths of 200,000 Allied and Turkish soldiers, all for nothing.

Churchill’s encouraged the British suppression of the Arab revolt in Iraq (invaded by Britain in 1914 and later partitioned with disastrous consequences), which included the bombing of the Kurds and the use of poison gas against them. This has led to repeated violent British involvement there to this day. He reckoned the massacre of the Kurds as of no importance since they were ‘a degraded race’ – but then he thought much the same of all Non-European peoples.

In 1941 Churchill knew Singapore was undefendable, yet 8,000-15,000 British and Commonwealth soldiers and citizens were killed and 130,000 captured in his futile and humiliating Malaya campaign and the greatest surrender and defeat in British military history.

Churchill deliberately did not warn the USA about the Pearl Harbour attack by the Japanese in 1941 because he needed it to be involved in the War on the British side.

Churchill rejected scientific advice and ordered the appalling bombing of German civilians in Hamburg, Dresden… (600,000 German civilians and 160,000 young allied airmen killed). Many reckoned Churchill as no better than a gangster for this unpunished war crime.

In WW2 Churchill allowed 6 to 7 million Indians to starve to death in the Bengali holocaust, when he could have saved the majority of those lives. (Churchill – racist and imperialist to the core – also seemed to have no concept of the previous horrors of British India – with 10 million dying in post-1857 India Mutiny reprisals and 6-9 million starving to death in the 1895-1900 famines, saying that ‘the Indians breed like rabbits anyway’ – let alone horrors like the British responsibility for the 1840s Irish Potato Famine in which 1 million died).

In 1944 Churchill decided on the partition of Palestine (in 1878 Jews had been 5% of the Palestine population; in 1948 they were 1/3 of the population; 67 years on, there are now over 7 million Palestinian refugees), ensuring the permanent Middle East crisis.

Churchill acknowledged the crucial importance of dividing and ruling in the Indian subcontinent, that is, maintaining Hindu-Muslim antipathy, in order to preserve British rule in there. Eventually 1 million died in the partition of India and Pakistan in 1947. Has the Church of England Finally Kicked the Bucket? The myth of Hitler being a Christian

The myth of Hitler being a Christian
It is reasonable to say that atheists believe in many fairytales in order to bolster their faith. One of this is that Hitler was a Christian.
Comments
×