Protest Over Announced Pulling Down Of Orthodox Church In Pristina

The participants of an international conference titled Human Dignity, Freedom and Rights: Christian Dimension, held in Slovenia, have sent an appeal to Pristina city authorities to abandon a scheduled demolition of the temple of Christ the Savior in downtown Pristina. 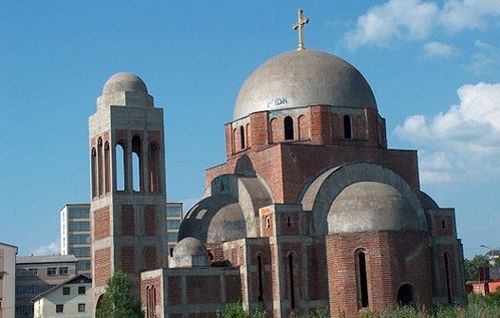 The final communique of the three-day conference, organized by the International Fund for the Unity of Orthodox Peoples, and a letter sent to Pristina, stress that the destruction of the unfinished Serbian Orthodox Church (SPC) would be a crime against civilization and religion and urge those in charge to give up their intention.

The Pristina authorities have recently threatened that they would knock down the church, located near Pristina University, unless a request for registration of this religious building is submitted until February 5. The University of Pristina has filed a relevant lawsuit claiming that the church was built on part of the space that belongs to that institution.

The SPC Diocese of Raska-Prizren, however, denied allegations that the church was being built illegally, pointing out that they possessed complete documentation issued by competent institutions at the time when the construction works had started.

The eighty participants in the international conference, coming from 24 countries, among whom were are MPs from Serbia, Russia, Bosnia-Herzegovina (Republika Srpska), Bulgaria, Kazakhstan, Jordan, Palestine and Armenia, and bishops, priests, professors and representatives of international organizations, also addressed the government of Montenegro, expressing their protest over Montenegro’s decision to have SPC priest Velibor Dzomic exiled from that country. Unlawful seizure of monastic lands in Kosovo and Metohija continuing
According to a report of the brethren of the Serbian Monastery of Sts Cosmas and Damian in Zociste, a local Albanian individual has recently seized a parcel of land, belonging to the monastery.
Comments
×