The Patriarch of Antioch expresses thanks to Russia 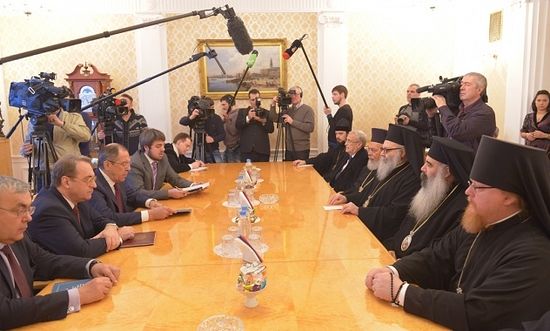 “We thank Russia, its government and people, the Russian Orthodox Church for the Russia’s political and international position, for support of peace, its efforts to settle the conflicts and crises worldwide –above all in Syria and the Middle East region,” stressed Patriarch John X of Antioch and All the East at his meeting with Foreign Minister of Russia Sergey Lavrov.

“I am also grateful for the humanitarian aid that Russia has been sending to Syria and other countries of the region for those who are in acute need of it. We appreciate the efforts that Russia is making for a peaceful settlement of the region’s existing problems as well,” the Patriarch noted. Patriarch of Antioch thanks for help to Syrian people

Patriarch of Antioch thanks for help to Syrian people
"We regard this action as a manifestation of solidarity and brotherly relation to us in these difficult times,” says his Grace Patriarch John in his message. “Undoubtedly, you are helping our compatriots who are deprived of their homes to cope with their current terrible circumstances..." West Bank villagers celebrate St. Nicholas as protector, miracle man
Ask any Beit Jalla Christian, and he or she will point out the poor man's house—and the windows through which the bags were thrown—located right next to St. Nicholas Greek Orthodox Church in the center of the village.
Comments

Richard Harrison2/25/2015 4:24 am
I wish to express my thanks to Russian Government and people too.RIck Harrison
×