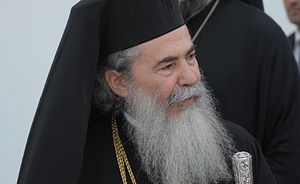 The Greek Orthodox Patriarch of Jerusalem Theophilos III Thursday condemned the ongoing attacks against the Christian and Muslim sites in the occupied Palestinian Territories, the latest of which was setting fire to the Greek Orthodox Church monastery of Sion in Jerusalem.

In a written statement, the Patriarchate said targeting churches and mosques is caused by the spread of racism and hatred in light of the absence of peace and the dominance of extreme settlers’ groups known as Price Tags groups.

Settlers torched a room of the Greek Orthodox Church monastery of Sion, which houses the patriarchal seminary, and sprayed graffiti offending to Jesus Christ on the walls.

Fires were set to the school room and a toilet facility used by priests and seminarians inside the monastery building, causing extensive material damage. No casualties were reported in the attack.

Patriarch Theophilos III confirmed that Christians will always be an authentic part of the holy land’s past and future. The Greek Orthodox Patriarchate will remain the oldest institution in the world and the mother of all churches.

He added that the criminal assailants will not terrorize this church or its seminarians and called on official authorities to investigate the attack and many others targeting sacred sites, affirming that racism, hatred and disrespect for all religions are the enemy of all. An Orthodox church robbed in Haifa (+Photo)
Attacks on Christian houses of worship in the Holy Land are continuing.
Comments
×