The Message of Patriarch Theophilos III on the Start of Lent

Although the Arabic text is clearly a somewhat awkward translation, it is not upon on the Patriarchate of Jerusalem's website and,to my knowledge, it has only been published by the Jordanian state news agency, Petra. 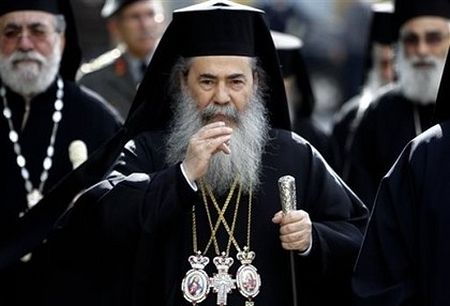 Amman, February 25 (Petra)-- Patriarch of Jerusalem and All Jordan and Palestine, Theophilos III issued a message on the occasion of the start of the forty-day fast, in which he said:

In Greek Orthodox Christianity, fasting is closely tied to the sincere desire to draw near to God and to humble the self before Him.

The fast is intertwined with prayer and supplication to the Creator. Fasting has conditions that appear in the Holy Bible, among which the Book of Isaiah mentions, "Is this not the fast that I have chosen: To loose the bonds of wickedness, to undo the heavy burdens, to let the oppressed go free, and that you break every yoke? Is it not to share your bread with the hungry, and that you bring to your house the poor who are cast out; when you see the naked, that you cover him, and not hide yourself from your own flesh?" Therefore we believe that fasting in a manner that is acceptable to the Lord is an important and fundamental part of proper human behavior. Although we are called to practice proper human behavior both in and out of the time of fasting, intensifying it during this holy time affirms that fasting is a comprehensive state in which the human person bows to God's desire, is led by His teachings, prays to Him intensely, spreads love, renounces hatred and rancor and expels the whispering of Satan, aided by the spiritual power that results from approaching God through the fast that gives a mystical dimension to the Christian believer.

As for the unacceptable fast, Christ warned us of this when he said in the Holy Gospel of Matthew, "When you fast, do not be like the hypocrites, with a sad countenance. For they disfigure their faces that they may appear to men to be fasting. Assuredly, I say to you, they have their reward." With this warning, we distance ourselves from superficial fasting, which loses the true meaning of the comprehensive state of fasting because in true, acceptable fasting there is a basic step toward overcoming the passions and worldly pleasures and it prepares the soul for salvation from evils and sin.

Fasting during one's youth has a special importance because it establishes a lifelong journey of commitment to the teachings of Christ the Lord and His great message. Christian youth, who face enormous challenges-- especially in this region of the world on account of political instability and the loss of peace in many parts of it, economic hardships, and other disadvantages, obstacles and difficulties-- are in need of the spiritual strength that springs from drawing near to God through prayer and fasting. Through fasting, hearts are purified, vision becomes clearer, and forces are united to face challenges and dangers, and new pages are opened in fraternal relations-- especially between the children of the Greek Orthodox Church and her leadership. May this produce a new start in relations, especially with the young generation, governed by truth, developed by love, and shepherded by God.

Our Greek Orthodox Church places the future in the hands of her Orthodox youth in Jordan and Palestine, this generation who are zealous for its Patriarchate of Jerusalem, the Mother of Churches, and look to it as an extension of themselves to their Christian roots that go deep in the Holy Land. Likewise, the Church sees in her Orthodox youth the rightful heir of her inheritance and history and her positive extension that is active in society in general. The paramount importance of our Orthodox youth cannot be risked and and left undefended, without true Orthodox preaching that springs from the depth of our faith in the message of love that Christ the Lord brought.

So that the contents of this paternal message do not go unapplied in practice, the Greek Orthodox Patriarchate and its monasteries in all parts of the Holy Land open their arms to all youth from our Orthodox flock to form groups for dialogue and activity to deal with all the issues that have been raised and to lay the foundation for a future that brings together the Orthodox Church with her youth so that we may face all challenges together, armed with grace and divine spiritual power given to us by our faith in Christ, especially during the days of the blessed fast. Blow The Trumpet in Zion
Fr. Barnabas Powell
All too often it’s easy to miss the warnings in my life because my life, my soul, my mind is flooded with my own “voice.” The selfish wants drown out that “still, small voice” that is screaming at me that I am going down a wrong path.

Finding Freedom
Sergei Khudiev
The story of St. Mary is the story of a repentant harlot. Why does the Church find this story so important? Why does the whole Orthodox world remember this woman? Forgiving Our Way into Salvation
Gabe Martini
By pondering our participation in Christ’s life throughout the year—and especially through the season of Great Lent—we can better understand its purpose.
Comments
×