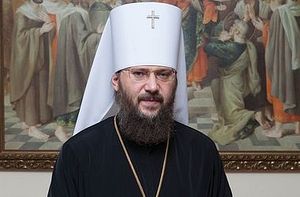 Chancellor of the Ukrainian Orthodox Church (Moscow Patriarchate) Metropolitan of Borispol and Brovary Antony has complained to Ukrainian President Pyotr Poroshenko that numerous church buildings had been illegally seized from the church by force.

"There have been attempts in the regions of Rovno, Kiev, Lvov, Ternopol, Volyn, and Cherkassy to illegally seize parishes of the Ukrainian Orthodox Church by force. Up to now there have been 20 registered seizures of our church parishes. There is an extremely tense situation in another eight parishes," a statement by the Ukrainian Orthodox Church quoted its chancellor, Metropolitan Anthony as saying during a meeting between Poroshenko and the Ukrainian Council of Churches and Religious Organizations.

"Regrettably, all this happens with de facto approval from bodies of local government. Individual political parties interfere in these sensitive issues, taking advantage of their impunity. Such processes not only violate religious peace in our country but also carry a threat to national security. We believe that the leadership of the country should pay special attention to this," metropolitan said.

He also said that in the regions of Donetsk and Luhansk, where there are 1,100 churches and 17 monasteries belonging to the Ukrainian Orthodox Church, nine church buildings had been destroyed and 77 damaged in recent hostilities.