Great Lent is wonderful time for increased, concentrated spiritual reading. We are spending less time planning and preparing culinary feasts, we try to distance ourselves more from the empty clatter of television programs and popular movies, and attend more church services. All of this together with the lightness of our Lenten diet aids us in focusing on our spiritual life, in comparing how we live with how the spiritual fathers and mothers of the Church lived, and in receiving their instructions more deeply. In keeping with this edifying trend, OrthoChristian.com will be posting daily homilies from The Fifty Spiritual Homilies of St. Macarius the Egytian, translated by A. J. Mason, D.D. (London: Society For Promoting Christian Knowledge, Northumberland Avenue, W.C., New York: The Macmillan Company, 1921). 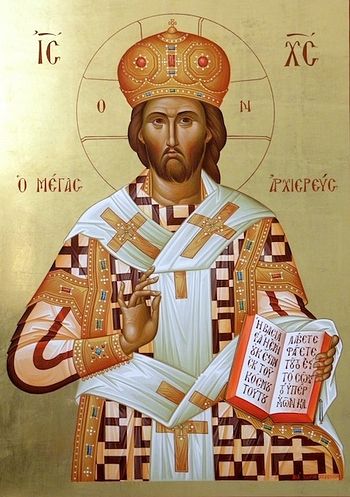 Concerning the kingdom of darkness, that is, of sin, and that God alone is able to take away sin from us, and to deliver us out of the bondage of the evil prince.

1. The kingdom of darkness, the evil prince, having taken man captive at the beginning, enveloped and clothed the soul in the power of darkness, as a man might clothe another. "And that they may make him king, and clothe him with royal garments, so that from head to foot he may wear royal apparel."1 In this manner the evil prince clothed the soul and all its substance with sin. He defiled it all, and brought it all into captivity to his kingdom, leaving not one member of it free from him not the thoughts, not the understanding, not the body; he clothed it all with the purple of darkness. For as it is the body that suffers, not one part or member of it, but the whole is liable to suffer together, so the whole soul suffered the passions of unhappiness and sin. The evil one clothed the whole soul, which is the indispensable part or member2 of man, with his own unhappiness, which is sin, and thus the body became liable to suffering and decay.

2. For when the apostle says, Put off the old man? He means a complete man, with eyes for eyes, ears for ears, hands for hands, and feet for feet. For the evil one has defiled the entire man, soul and body, and dragged him down, and has clothed the man with an "old man," polluted man, unclean, at enmity with God, not subject to the law of God,3 and all identified with sin, that he may no longer see as the man himself wishes, but may see wrongly, and hear wrongly, and have feet that are swift to do evil, and hands that work iniquity, and a heart that devises evil things. Let us therefore beseech God that He would put off the old man from us; because He alone is able to take away sin from us, for those that have taken us captive, and that detain us in their kingdom, are too mighty for us. But He has promised to deliver us from this sore bondage. When there is a hot sun and a wind blowing, the sun and the wind each have a body and nature of their own, but no one can separate between sun and wind, unless God, who alone can, should make the wind to cease from blowing. In like manner sin is mingled with the soul, though each has its own nature.4 3. It is impossible to separate between the soul and sin, unless God should stop and repress this evil wind, which dwells in the soul and in the body.

A man watches a bird flying, and wishes to fly himself, but he cannot, because he has no wings. Even so the will is present 2 with a man to be pure, and blameless, and with- out spot, and to have no wickedness in him, but to be always with God ; but he has not the power. To fly into the air of God and the liberty of the Holy Ghost may be his wish, but unless wings are given him, he cannot. Let us then beseech God to bestow upon us the wings of a dove, even of the Holy Ghost, that we may fly to Him and be at rest,5 and that He would separate and make to cease from our souls and bodies, that evil wind, which is the sin that dwelleth in the members of our souls and bodies. None but He can do it. Behold, it says, the Lamb of God, that taketh away the sin of the world6 He alone has shewn this mercy to those men who believe Him, redeeming them from sin; and for those who are always waiting for Him, and hope, and seek without ceasing, He achieves this unutterable salvation.

4. As in a gloomy black night a fierce wind blows, and stirs and searches and shakes all the plants and seeds, so when man falls under the power of the darkness of the devil's night, and is in night and darkness, he is agitated by that dreadful wind of sin that blows, and is shaken and stirred, and searched through all his nature, his soul, his thoughts, his understanding; and all the limbs of his body are shaken, and no member of either soul or body escapes free and immune from the sin that dwelleth in us. In like manner there is a day of light and a divine wind of the Holy Ghost, which blows and refreshes the souls that are in the day of the light of God. It penetrates all the substance of the soul and its thoughts, and all the being and all the members of the body, refreshing and resting them with a divine, unspeakable rest. This is what the apostle declared when he said, We are not children of the night or of darkness, for ye are all the sons of light and the sons of day.7 1 And as yonder, in the state of error, the old man put on man as a complete whole, and wears the garment of the kingdom of darkness, the garment of blasphemy, unbelief, unconcern, vainglory, pride, avarice, lust, and all the other trappings of the kingdom of darkness, ragged, unclean, and abominable ; so here, all who have put off the old man, which is from beneath the earth all whom Jesus has stripped of the clothing of the kingdom of darkness have put on the new and heavenly man, Jesus Christ, once more corresponding, eyes to eyes, ears to ears, head to head, to be all pure, and wearing the heavenly image.

5. The Lord has clothed them with the clothing of the kingdom of ineffable light, the clothing of faith, hope, charity, of joy, peace, goodness, kindness, and all the other divine and living clothing of the light of life, of inexpressible rest, that, as God Himself is love, and joy, and peace, and kindness, and goodness, so the new man may be through grace. And as the kingdom of darkness, and sin, are hidden in the soul until the day of resurrection, when the bodies also of sinners shall be covered with the darkness that is now hidden in the soul, so the kingdom of light, and the heavenly Image, Jesus Christ, now mystically enlightens the soul, and reigns in the soul of the saints, but is hidden from the eyes of men, and only with the eyes of the soul is Christ truly seen, until the day of resurrection; but then the body also shall be covered and glorified with the light of the Lord, which is now in the man's soul, that the body also may reign with the soul which now receives the kingdom of Christ and rests and is enlightened with eternal light. Glory to His mercies and His tender compassion, for that He has such pity on His servants, and enlightens them, and delivers them from the kingdom of darkness, and bestows upon them His own light and His own kingdom. To Him be glory and might forever. Amen.

1 The source of the quotation, if it is one, seems not to be known. It is intended, apparently, to give the idea of a complete envelopment. Lenten Reading: Fifty Spiritual Homilies of St. Macarius the Egyptian. Homily 1
St. Macarius the Great
Great Lent is wonderful time for increased, concentrated spiritual reading. We are spending less time planning and preparing culinary feasts, we try to distance ourselves more from the empty clatter of television programs and popular movies, and attend more church services. All of this together with the lightness of our Lenten diet aids us in focusing on our spiritual life. Outside of Eden
George Strickland

Outside of Eden
George Strickland
We are just outside of Eden, but on this side of Pascha. Bishop Kallistos observes, “Lent is a time when we weep with Adam and Eve before the closed gates of Eden, repenting with them for the sins that have deprived us our free communion with God. But Lent is also a time when we are preparing to celebrate the saving event of Christ’s death and rising, which has reopened Paradise to us once more (Luke 23:43).”
Comments
×