“An icon of the Mother of God of the Byzantine period, which a family from Turkey obtained in Antakya (Antioch) and took with them to Paris has started weeping,” writes the Greek website Romfea. According to the Altindagoglous, the icon was given to them in 2006 by a Greek monk in Libya. People from different countries are coming to pray before the wonderworking icon. People in Russia have heard of it as well. 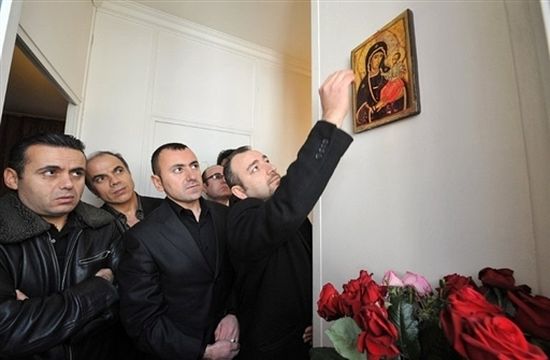 But one look at the wonderworking icon is enough to recognize it at once: this is a photocopy of a great icon of the Holy Protection Convent in the town of Suzdal! And it is precisely a photocopy, not a hand-painted copy. A hand-painted copy cannot so exactly resemble the original as a photograph. 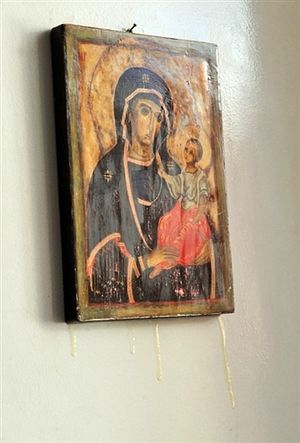 Its iconography is absolutely unique. For some time it was mistakenly called “the Georgian Icon” because of the open stole on the breast that reveals a corner of the tunic of the Mother of God. It is different from the traditional “Hodigitria” icon-type in the position of the right hand of the Mother of God on the legs of the Christ-Child, like on the “Roman” or “Milk-giver” Icons. The Infant’s pose and garments are different. And seemingly the most indiscernible difference is the blessing right hand of the Child. It coincides with the edge of the stole! As if the Infant Jesus is concealing Himself and revealing His Mother. An icon-painter would not have repeated it, but photographic technology did. The eyes were painted over this photocopy, but we will talk about this later.

The holy icon is kept at the Tretyakov Gallery and dates back to the 1360s. The inventory of the Holy Protection Convent in Suzdal for 1597 describes in detail the precious gifts associated with this icon “of the Most Pure Virgin” with 225 items donated as tokens of gratitude for miracles. 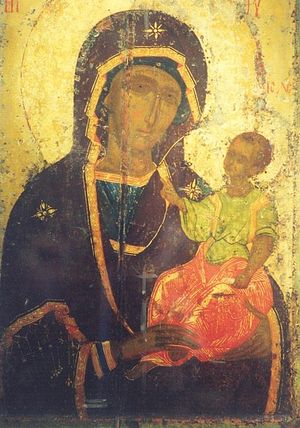 Icon of Suzdal Pokrovsky Monastery
According to tradition, it was this icon before which the meek royal consort Anastasia Romanovna (1530-1560; the first wife of the first Russian Tsar Ivan IV, called “The Terrible” but literally “the Formidable”) prayed for the birth of an heir. She finally gave birth to three sons, one of whom would be the next Tsar, Theodore I. In 1552, before his campaign in Kazan, at a service of intercession at the Holy Protection Convent in Suzdal Tsar Ivan heard the words that Abbess Vassilisa said to him in a low voice: “You will return as Tsar of Kazan.”

He turned back and promised to place his favorite icon in the convent should the words of the abbess come true. Having seized Kazan on the feast of the Protecting Veil of the Mother of God, on his way back the Tsar fulfilled his promise, adorning the icon by suspending from the crown of the Queen of Heaven a pair of gold earrings with pearl, turquoise and cornelians which had belonged to the Tsarina of Kazan. 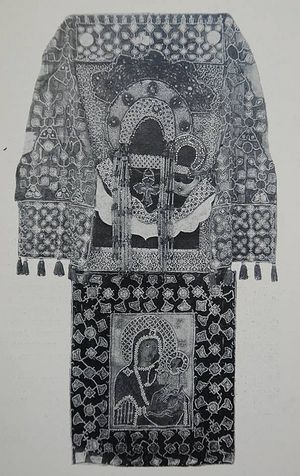 In thanksgiving for the child’s birth Anastasia Romanovna embroidered a cloth sash and hanging veil The second wife of Ivan IV, Maria Temryukovna (1544-1569), out of gratitude adorned the icon with a pearl necklace of the finest work. The eighteen-year-old spouse and consort of Tsar Vasily Shuyskiy (ruling from 1606 to 1610), who had buried her first daughter, took the monastic tonsure at the Holy Protection Convent together with her newly born second daughter, who was to repose shortly afterwards as well. What she prayed for and how the Mother of God comforted her are known only to one silent witness—the Tsarina’s golden filigree cross on the breast of the Queen of Heaven.

The Holy Protection Convent became a place where many distinguished persons took monastic vows, labored in asceticism and reposed; these included the spouse of Grant Prince Vasily III Solomonia Saburova (St. Sophia of Suzdal), one of the spouses of Tsar Ivan IV, Tsarina Anna, the spouse of Vasily Shuyskiy Tsarina Ekaterina, the spouse of Emperor Peter I, Eudoxia Lopukhina. It also became a destination for pilgrimages to the wonderworking icon, a place of consolation. By 1910, as we can see from a photograph by V. Georgiyevsky, the image on the icon of the Mother of God had become almost invisible. And in 1920 one of the most outstanding restorers of his age, a favorite of the Holy Patriarch Tikhon, G.O. Chirikov, carefully cleaned the icon from a layer of darkened oil and an image painted over it in the seventeenth century. The fact is that the adornments added to the icon made its veneration by the faithful impossible—venerated only the hanging veil. The eyes of the icon can barely be seen. Only the pupils can be seen, the eyes have disappeared in tears, they have been “cried out.” That is why She has consoled and is still consoling. And the Mother of God is again “weeping” in Paris. Dozens of Christian tombs damaged in northern France: minister
Prime Minister Manuel Valls said on his Twitter account that he was "disgusted" by the vandalism, which damaged dozens of graves in the town of Tracy-sur-Mer, on France's northern coast.

gerasimos5/12/2019 4:33 am
Christ is Risen! Thank you for you labour of love in putting this information about God's miraculous love for us. It is most helpful.

I would like to suggest, to humbly suggest, that the English text, be it original or translation, is in need of a loving Orthodox Editor, and I would urge you to Contact Matushka Lardas (she is on facebook) and is a wonderful editor.

Even Ernest Hemmingway had editors.

Truly He is Risen
gerasimos

Stefan 3/9/2015 7:03 pm
Hello,
they arent muslims at all :D it's my uncle & aunt and they're orthodox christians from antioch... in addition to that his father was an orthodox priest when he was alive, so it would be very kind to change it.

wish you a blessed Lent