Archbishop Demetrios, the Primate of the Greek Orthodox Church in America will take part in the events commemorating the 50th Anniversary of the historic March on Selma, led by the Rev. Dr. Martin Luther King, Jr., in which Archbishop Iakovos of North and South America also participated, along with other civil rights leaders on March 15, 1965. 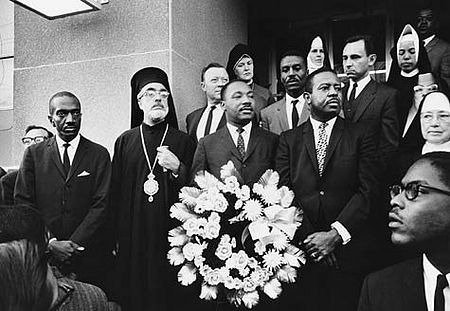 Archbishop Demetrios will arrive in Birmingham, Ala., on the evening of Thursday, March 5, 2015.

On Fri., March 6, 2015, the Archbishop will participate in a Press Conference to be held on the steps of the Birmingham Civil Rights Institute. He will also participate in the groundbreaking for the new Freedom Center (Human Rights Institute). In the evening, His Eminence will celebrate the Salutations to the Theotokos (Mother of God) at the Greek Orthodox Cathedral of the Holy Trinity, Birmingham, Ala.

On Sat., March 7, 2015, Archbishop Demetrios of America will visit Selma, Ala., and join other civic and religious leaders at the historic Brown Chapel AME Church.

Early in the Morning of Sun., March 8, 2015, His Eminence will deliver remarks on God, Struggle, and Unity at the Martin Luther and Coretta Scott King Unity Breakfast. In the afternoon he will participate in the annual march across the Edmund Pettus Bridge, commemorating “Bloody Sunday.”

The Greek Orthodox Church has always been an advocate for equality and continues to fight against racism, prejudice, discrimination and xenophobia with fervent love for God and all people. To commemorate the 50th Anniversary of the March on Selma, and to highlight the efforts of His Eminence Archbishop Iakovos of blessed memory to advance the Civil Rights Movement, the Holy Archdiocese has launched a website with a plethora of historical resources and announcements for upcoming events around this most important time in our nation’s history. Please visit:civilrights.goarch.org